He may be confined to a wheel chair, but that hasn’t stopped Liam Buckley from living his life to the full and achieving goals many of his able-bodied counterparts would struggle to reach.

Born and raised in Angaston, this bearded Barossan on wheels is not only on-trend when it comes to his facial hair, he’s also among the best lawn bowlers on the green, thanks to his bull-dog like determination which has led him to reaching the pinnacle of his sport – a world title victory.

It’s not a bad effort for the 28 year old who was diagnosed with muscular dystrophy around two decades ago.

“My physical education teacher at Angaston Primary School picked up on it because I used to fall over a lot, for no reason. My dad’s family doctor…his wife was a specialist so she got us in touch with a renowned neurologist. I got a blood test taken and that’s when I was diagnosed. Pretty sure I was seven, just turning eight.”

Being a big fan of cricket, it was heart breaking to discover he wouldn’t be able to get out on the pitch. But when Liam’s father, Christopher, a former Angaston Bowling Club member and premiership player, introduced his son to the bowling green, his sporting talent quickly revealed itself.

He was also led to the game of 8-ball and found that both sports offered more than a fun pastime with fewer physical demands.

“With these sports, generally the people you play with are a lot older than what you are,” explains Liam.

“That was a really good learning experience for me, I matured a lot quicker than I perhaps might have otherwise and could hold decent conversations with adults at a much younger age. I think that made getting along with people and forming relationships, particularly in the workplace and stuff like that, easy.
It’s a big attribute of mine now.

“It’s had more benefit to me than I could have imagined at the time. Obviously back then I just liked playing the game, it was entertainment, but all those other things that come with it were of great benefit as well.” 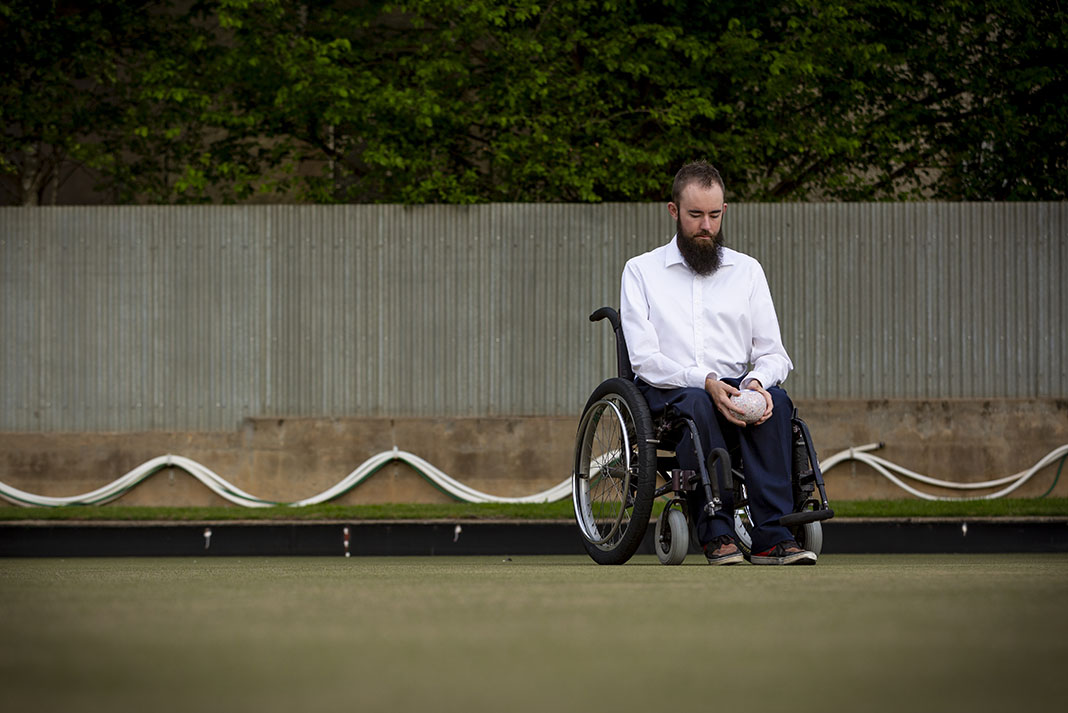 Whilst Liam loved 8 ball, by the time he reached the age of 15, he simply couldn’t stand up long enough to play anymore and had to give it away.

But lawn bowls was a different story, there was nothing that would keep this young gun off the green and Angaston Bowling Club members rallied to ensure he could “stay in the game”.

“They were really good… A lot of those older blokes out there looked out for me. There was a couple of fellas, like Brian Teakle and Brian Bowden….when I could no longer walk the length of the green and thought that was the end of it, I can’t do it anymore, they actually came around to my house and sat down with me and my parents and said we’ll just get you on there with that gopher, we can modify that. Just to keep him involved with the game…I had a gopher thing that I zipped around high school.”

Liam was eventually forced out of the gopher and into a wheelchair permanently when his muscles deteriorated further, but the situation opened up a whole new world for the young bowler.

He says all the “stars aligned” when his talent was discovered by “a lovely old lady” who was a coach at a junior bowls event he attended.

“I was about 14 or 15  and she obviously recognised I had a disability and she didn’t care. She just came up to me and asked if I was interested in joining the state team. They’re called the Wombats – the South Australian Multi-disability Lawn Bowls team.

“I said I suppose. I didn’t know such a team existed… I didn’t even have a bowls chair. The one I did have, if I used it nowadays, they’d have a heart attack,
it was so illegal!

“I got involved in the training and once I was exposed at that higher level, it was just a rapid improvement straight away. I got to play against the best state bowlers who were all pretty handy. National winners, Australian representatives, even a Paralympic bronze medalist – they were all there at the time and they were teaching me.”

Again, there were important life lessons to be learnt from such senior players, particularly the important mental side of the game and the need to be level headed.

“More between the ears, because when you are younger, you’re just a bull at a gate and if you are getting beat, you tend to spit the chewy and throw the toys out of the cot! It was a sharp learning curve.” 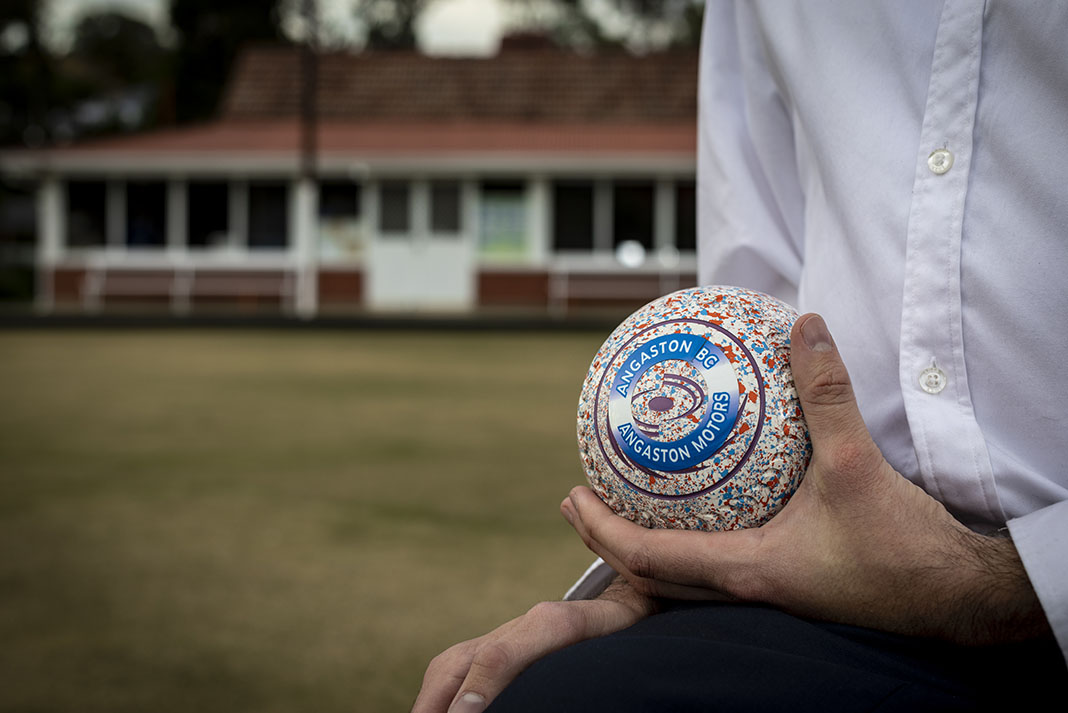 Meanwhile, Liam was excelling at school with his eyes fixed firmly on the career he was drawn to from an early age.

“I always had a fascination with crime…catching crooks. I would have liked to be a copper but because I physically wasn’t able, I thought I would become a lawyer.

“I got into Flinder’s Law and lived at the College. I was lucky Foundation Barossa gave me a scholarship and I had a secret benefactor…. I’m very thankful because without that, I simply wouldn’t have been able to do what I did.”

In 2016, Liam graduated with a Bachelor of Laws and Legal Practice and was admitted to the Supreme Court.

“I got to sign my name in the big Harry Potter style book… in front of my mum and dad,” he smiles.

It was during his university days that his bowling career reached an impressive pinnacle.

Liam was selected into the national team and travelled to South Africa for the experience of a lifetime. Once again the  community rallied to ensure the talented teen could cover the costs of his first overseas trip and progress his sporting talents with the disability team further.

He lucked out with his bowling on that occasion, but the opportunity to represent Australia rose again in 2015. This time he says he was “at the peak of his powers” and travelled to New Zealand confident in his abilities and knowing the conditions of the greens would be more like home.

“I went over there and had an unbelievable tournament,” Liam says.

“I got to play in the semi-finals this time, played a Korean guy. I remembered him from South Africa and he was pretty good. Didn’t speak a word of English though. It was pretty funny!

“I ended up beating this guy 21-20 so I got into the final and ended up playing an Englishman, who beat me in the sectional rounds, again. This time I absolutely wiped the floor, beating him 21-6  and ended up winning the whole thing – I became a world champion. It’s is a pretty cool thing to say… I was presented with the gold medal with the National Anthem playing and all that sort of thing.

“You can’t get any better really!”

“I’m extremely privileged compared to some people. A lot has to do with your attitude I think too. I don’t get bogged down in negative thoughts and stuff like that and I think it is a good way to be."

Back home, Liam has three Panther Premierships under his belt, two in Division 1, as well as his photo on the Clubroom wall.

But there’s one more thing Liam is keen to add to his list of achievements.

“They’ve just introduced disabled bowls to the Commonwealth Games and I haven’t been picked for that…. yet!” he says with a grin.

After 12 months searching, Liam managed to find employment at Allianz Insurance where his career is now skyrocketing. It may not be the lawyer job he first imagined, but it’s just as stimulating.

Again showing he can achieve anything he puts his mind to, Liam worked his way up from a humble claims officer to being part of a new team created as a result of the Royal Commission into the banking sector.

“I’m a complaints support advisor now. There’s exposure to a whole lot of divisions. CTP claims, policy operations, property and motor…every side of the business. A lot more exposure which can only be a good thing,” he says excitedly.

With the support of the Barossa, his workplace, friends and family, which includes doting mother, Cynthia; father, Christopher and younger brother Shannon whom he calls his “best mates”; Liam is living his best life with aspirations to continue his upward trajectory.

Even he has to smile at how far he’s come.

“People often say to me we really admire the way you go about your bowls and your work…you have a real crack at it. I’m like yeah but, what about the millions of people who can’t afford to eat, have no water, no house,” he says, remembering the extreme poverty he had seen in South Africa years before.

“I’m extremely privileged compared to some people. A lot has to do with your attitude I think too. I don’t get bogged down in negative thoughts and stuff like that and I think it is a good way to be.

“I wanted to get off the pension and become a tax payer, I wanted to be the one to help people who couldn’t work and I was always hellbent on doing that.

“I’ve worked hard, busted my guts for a long time, but I’ve got there!”