The tale of a shopkeeper

He’s standing behind the counter at Miles’ Deli and Newsagency, the family business, greeting nearly all by name as they walk in to grab their paper, lotto ticket or whatever else they need at the time.

Sure, it’s a far cry from the lofty heights of an airport control tower, but from this substantially less elevated position, Richard is in his element overlooking his shop, chatting and helping customers, all while observing the day to day activities of his hometown of Angaston.

“I went to careers counselling, as you did in the mid 70s, and they saw my interests and basically said you like sport do you? I said yes, I love sport. Well, you won’t be playing any because air traffic control is seven days a week. So, I canned that idea, there and then!”

Nicknamed “Milo”, the Concordia College graduate became a third generation shopkeeper, his father and grandfather both owned and worked in the very building he stands in today which has been in the family for a century now.

“My grandfather, Edward was working here in 1918, then in 1919 the chap who owned it offered it to my grandfather and he bought it.”

Originally a green grocer/deli, the shop has evolved with every generation, with the introduction of a newsagency in 1964 followed by lotteries.

Richard tells of how his father, Roger was employed by the railways and before and after working at the Angaston station each day, he’d help out at the family shop, with Friday morning being “fruit and veg round” day.

“We had a big green Austin van and it would be choc-a-block, I remember going out with Dad as a kid,” says Richard.

Born in 1960, Richard grew up with two older sisters and was introduced to the family trade at an early age.

“After school, we’d have to come and weigh out the potatoes and do the empty bottles… we used to go through that many because there was no recycling so of course you’d have all these empty bottles people would drink and leave in the shop, then you’d have to sort them all out… but I remember I used to hate having to leave school and come and work for an hour. I wanted to go over to the oval for the sports!”

Growing up across the road from the Angaston oval gates was ideal for Richard who followed in the Miles’ family footsteps when it came to sporting prowess on the footy field.

Also a keen cricketer, Richard was lucky to have captained a number of premiership sides with the Angaston Cricket Club.

“We had a couple of handy players, we had Bob Blewett who was state captain, he was the bank manager just up the road here. Then Brian Hurn, the original ‘Bunga’ came back after he’d done his stint at Kensington and played for South Australia, he came back and played for two to three seasons for us. I got to play alongside some legends and hence we had a pretty good side. I captained two or three and played in four premiership teams.”

Richard is still involved in the Angaston Football Club as Vice President and team manager and enjoys being part of the action each Saturday.

“It’s just continued, whether by chance or not. We all loved it. I know Dad loved it, I loved it, Jack loves it and obviously Grandpa would have love it. It’s just how it’s evolved.”

With the sporting community at the heart of his social life and the deli/newsagency central to his working life, in his mid-twenties, Richard bought the house which would become his family home.

“It was a bit of a bachelor pad until wifey came along and that was the end of it! Life changed quick, a boy a girl and a wife. It went from nothing to four of us pretty quick!”

Tracey had managed to take Richard off the bachelor’s list, and he was happy to oblige.

“She had two children, but that didn’t worry me. I thought she’s really lovely! We were married in 1992, so it’s been 27 years now.

“We got married on AFL Grand Final Day would you believe. I had all my mates around watching the footy, we got married at five o’clock at Yalumba after the match. We just whacked suits on at half past four and walked across the road… I remember West Coast Eagles won that year!”

Their children, Jack and Lilly arrived on the scene and the happy family soon increased to six.

“I remember saying to Dad, he could have had another occupation that didn’t involve seven days a week!”

Meanwhile, back in Angaston’s main street, the business continued to evolve. Neighbouring buildings were bought and Richard eventually took over the reins from his father and mother, Lola who managed the newsagent side.

“Business was very, very good then… But I remember saying to Dad, he could have had another occupation that didn’t involve seven days a week!”

Fast forward to today and times are very different. Supermarkets and 24-hour service stations have taken much of the trade. Banks and major employers have left Angaston, while the internet and trend towards online shopping means the busy newsagent of yesteryear’s focus has changed to gift lines in an effort to keep people coming through the doors.

“Unfortunately, people don’t need this type of business anymore… retail is a struggle nowadays. We are lucky we don’t pay rent. If I was here paying rent, I don’t know if I would be here.”

Whilst he is saddened by the trend, he is the ever-smiling, optimistic shopkeeper and is excited to see Lilly and Tracey start their own clothing boutique next door named “Lola and Lilly”, a nod to the family’s long tradition in retail.

“There’s no violins here!” he grins as he describes a typical day “at the office”.

He admits to seeing a few “interesting” things during his morning deliveries.

“I do see cars parked in front of houses… Recognisable cars in driveways that shouldn’t be, or perhaps they should be? I don’t know!” he laughs.

But it was flooding rains three years ago that created the most drama for Richard who ended up in the very newspapers he was delivering.

“Kalimna Road was my downfall… I had a little incident,” Richard smirks.

“This one Thursday morning, it had been wet…I’m flogging down Stockwell Road at 5.30 in the morning, it’s dark. I got to the bridge just before Willows and they had the bridge closed due to water. Well I thought I’m not going to muck around so I stopped and came back. I thought how am I going to get to the other guys? Gibbo and them had to get a paper! This is my mentally, I’ve got to deliver the paper – I was on a mission.

“I thought I’ll go down Kalimna and turn right down Light Pass Road. So I’m belting down Kalimna Road…I saw some water and I thought it must be pretty wet, it’s coming out of the driveway and all of a sudden, I hit this sheet of water – I’m in a bit of strife here!

“The water was halfway up the car now. I had my window down and I’m looking down thinking oh dear!

“I started thinking I’ve come this far… I knew I couldn’t keep going down Kalimna because I know they have the ford down there. Didn’t even think about trying to turn right, I thought I would go left. But when I got down to the intersection of Kalimna and Light Pass Road there was just water everywhere. I thought I’ll just get as far as I can and have to stop. I got down Kalimna Road, got around the corner and then I started slowing down because the car was starting to pack up.

“I rang Trace, she brought Lilly and they came straight out. They’re sitting on the other side of the ford and I could see them but, of course, I’m stranded.

“In the end, the Council had to get a great big grader because it was high enough to get through the water and the vision on the news that night was me standing on the roof of my car getting into the grader – I’ve got my trackies  and West End beanie on!”

“An hour’s gone by so I’m late opening the shop and then all these people are ringing saying where’s my paper? Mate, I don’t care about your paper, it’s cost me a car!”

Whilst decisions made that day probably weren’t the best, he’s sure of one thing.

“I’m glad I didn’t become a bl….dy air traffic controller that’s for sure!” 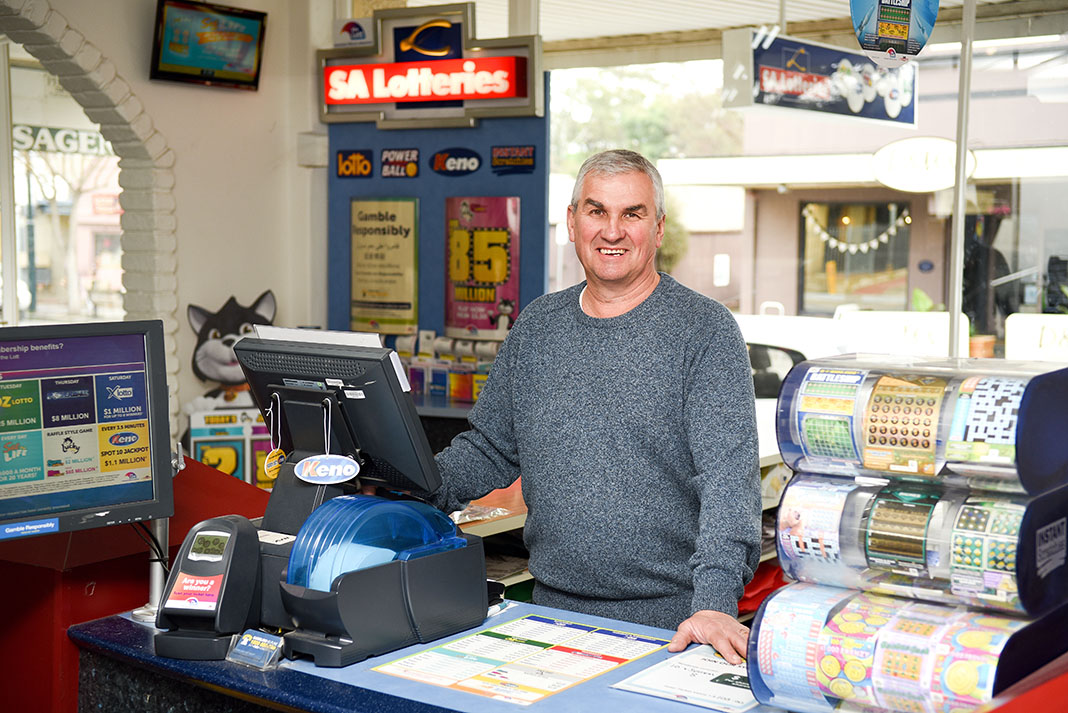