Admiration, respect and a sincere passion for Barossa’s wine heritage is what the Burge family are about.

With a name synonymous with quality, it was fifth generation winemaker, Grant Burge who was instrumental in taking his brand to the world.

But the family’s Barossa story began much earlier, back in 1855 when Grant’s forefathers arrived in Lyndoch from a little English village named Wilsford, the title given to the first winery connected to the Burge moniker.

“Percy Burge, the third generation after John and Meshach Burge, during the Depression in 1928, couldn’t sell his grapes and decided to make wine,” says Grant.

“It was all fortified wines in those days.”

Grant has fond childhood memories of the winery his father, Colin and uncle, Noel took over back in the fifties.

“I grew up in that environment, my playpen was the winery and I loved it and always knew I wanted to be a winemaker.”

Educated at St. Peter’s College as all Burge men have, there was a brief moment Grant thought he might become a lawyer.

“Someone up above said no-no Grant, I’ve chosen you as a winemaker and I won’t give you a decent enough score to get into law!”

Grant’s mother, Nancy wouldn’t allow her only child to join the family business because she foresaw the market steering away from fortifieds to table wines.

“I won’t tell you what I thought of her at the time! But, she was absolutely correct and that forced me to go out and do my own thing.”

Owning his own wine brand was Grant’s vision right from the start and, with support from his father, bought land in the early 1970s which they developed into vineyard together.

Grant teamed up with Ian Wilson to begin Burge and Wilson in McLaren Vale, the region where he gained his earliest employment.

“In those days, there was no winery other than the one I worked at that could make white wine, so we had to come to the Barossa to make it,” Grant explains.

“I played cricket with Rod Chapman down in Lyndoch and he was the manager at Krondorf winery. He said come up and make your wine there, so we did. After two years, in 1977, he said boys, bad news, Dalgety is going to sell the winery. But it’s good news for you guys, you should organise someone to buy it.

“I was 27 and my business partner was 25. That in itself created a lot of publicity… How the hell could these two youngsters go and buy a winery?”

But they had, through business partnerships and selling their successful bulk wine making business, Krondorf Wines was theirs.

“In 1979 we won a heap of trophies around Australia for our wine and then in 1980 we won the Jimmy Watson after Wolf Blass won his Jimmy Watsons and had really made it something… He was the competition, but we admired him – he was the king.”

Phrases like, “We’ve entered the Wolf’s Lair” and “Cry Wolf Cry” burst into promotional campaigns, with Blassy himself ringing to say he loved the extra exposure and “you boys keep it up!”

“Honestly, I’ve never been a rock star but that year all the interviews and the rest of it – it was like you were Rod Stewart!” laughs Grant.

“In 1983 we went public and we raised $8 million to fund that growth, it was just amazing.”

By now, Grant had already met the love of his life, Helen whom he married in 1981. Life and business was blossoming and eventually Mildara came knocking to buy out Krondorf Wines’ shareholders.

“Helen and I wanted to buy the company… but the share price had gone so high that we couldn’t afford it. In the end I said I would sell my shares at 85 cents, everyone got that… I’m still waiting for them to send me money for getting them that extra 15 cents!” he says with a smirk.

Grant and Helen bought the Krondorf vineyards, adding to their landholdings.

“We really went out and bought a lot of vineyards… interesting because vineyards were losing money at the time.”

He worked as production director for Mildara for two years and on weekends, managed his own vineyards.

“I was away a lot during the week and it got to the point where I thought do I really want this? I wanted my own business and at the end of ’87 I resigned from Mildara and said right, we’re starting Grant Burge Wines and that’s when we bought the Wine Keller. It was a restaurant… That’s where we were for 20 years or so. It’s St. Hugo’s now.”

Grant was going to build a winery at the site to crush grapes, but the late Doug Lehmann, who was winemaker at Basedow’s in Tanunda at the time, offered an alternative.

“Doug rang and said Grant, come and make your wine here… I’ve got plenty of capacity and I’ll give you a good deal. If your winery succeeds, you can always build yours later and if it doesn’t, you won’t need one. I said that’s very good logic!”

“People were calling it Burge-a-dows!” he jokes.

Grant Burge Wines became an internationally renowned brand making 750,000 cases and turning over $70 million. Then five years ago it was sold to global company Accolade, something Grant says he still struggles a little with today – after all, it is his name.

“Yep, and that doesn’t fit that comfortably with me,” he says.

“We decided we had too much debt and wanted to clear the decks a bit. We only sold the brand and the wine, we didn’t sell any real estate basically. If you had asked me two years before that, would you ever sell the brand? I would have told you you’re crazy! There’s no way I wanted it sold.

“The brain side of it says it was a very good deal. Emotionally, it wasn’t great… But hey, we can’t complain. I mean, we signed the document willingly and that’s business.”

The story continues for Burge

The Burge story is far from over with sixth generation, Trent Burge continuing the long winemaking tradition.

He has his own brand, Barossa Boy, made at Illaparra – a busy contract winemaking facility which trades under the multi-faceted Burge Barossa family business and includes everything from bottling and distribution, to farming and tourism.

For Trent, being the next winemaker in the Burge lineage is a privilege, although his career path wasn’t as “clean cut” as Grant’s.

Straight out of school, Trent started as a cellar hand at Illaparra.

“At first, it was about having a job and being able to have fun with my mates on the weekends and focusing on trying to make it as a sportsman,” Trent says of his early wine industry experience.

“I was heavily into sport, footy… and cricket has always been a passion.

“As the years went by, I went from wanting the baggy green, to wanting to be a part of the Red Backs. I got to a pretty good level in SA and I played 14 years of cricket for Northern Districts…played a couple of summers in the UK.” 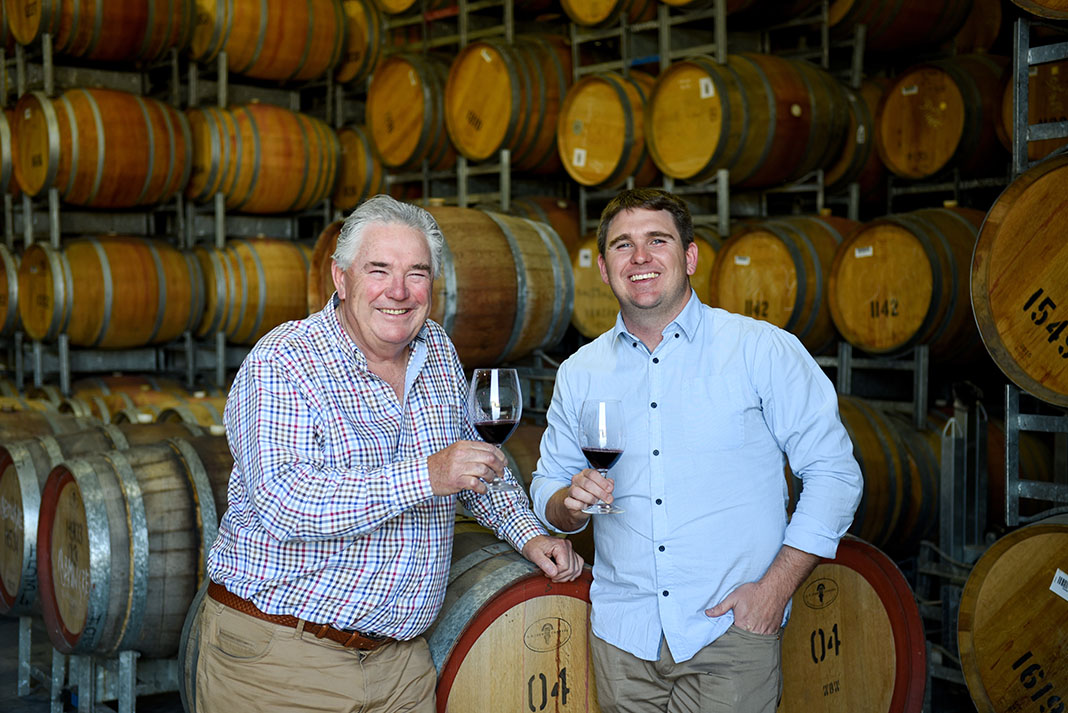 Still a devoted cricketer today, winemaking is now his other love with Trent describing how he had the best apprenticeship a winemaker could have.

“I’ve realised this is a really great industry. There are amazing wines out there, trying them has built up my passion not only for the wine, but also the whole industry of the Barossa,” he enthuses.

“For me, it’s about how hard the generations before me worked and what they’ve done. Even all the old vines that the Barossa has and how there are no other places in the world that have the scale of old vines we do.

“I feel really privileged and lucky to be the next generation to take on and be, I guess, a custodian of the region and work hard to not stuff up what all the generations before me have put together!”

Asked if he feels the pressure of being the son of a winemaking legend, he pauses briefly to reflect. The question has been asked before.

“Sometimes it’s a burden and sometimes it’s not,” is his reply. “It definitely opens doors to talk to people about the wines that you’re making but it doesn’t force them to say it’s good. Ultimately the wine has to speak for itself.”