On one wall hangs a framed artwork asking, how full is your cup?

The faint smell of Nag Champa hangs in the air.

It’s the same calming aroma that will welcome Steve back to the eclectic home he shares with his wife, Janette in Springton, when he finishes preparing for tomorrow’s learning.

“I like to create a homely environment rather than institutional,” explains Steve, with hands that work in expressive unison with his voice.

“I want to create a sense of belonging.”

If you ever pay a visit to the Valentines’ one acre retreat you will understand ‘homely’ for Steve is a bohemian mix of natural, vintage, found and restored objects, completely free from animal products, except the plethora of living ones attracted to the lovingly vegetated garden.

Allowing comforting influences into the classroom is as much for his own wellbeing as it is for his students, and part of Steve’s commitment to creating a nurturing and rich learning environment for his Tanunda Primary School reception students.

“It’s a hard gig for children… they come to school after experiencing the sprawling learning environment of kindergarten and they’re in a box,” says Steve.

“I didn’t want my room to be like that… It hums with amazing things.”

Challenging convention is nothing out of the ordinary for the articulate 56 year old, who attributes his open mind and progressive views to several mentors who have influenced his life at different times, among them friends, artists and educators.

“I grew up with a sheltered view of the world,” reflects Steve, who was born to working class parents in 1960s Elizabeth.

“And then people enter your life and you get other perspectives.”

A self-described non “blokey bloke”, Steve’s journey into teaching wasn’t conventional, starting his working life as a tradie on the end of a roller in his father’s painting and decorating business.

He married Janette, whom he’d met as a teenager, and the couple settled into a life in Gawler, with Bridie, their only child, born in 1995.

It was while Bridie was still young that Steve had what he calls his “crisis”.

“I was a painter for nearly 20 years and I thought, this is not filling me up at all,” reflects Steve.

“I wanted to try and contribute to  community and society, and painting houses was not doing it.”

Around the same time a sandwich board advertising ‘Montessori education’ appeared outside a community hall in Gawler.

Seeking to find an alternative for their daughter from the schooling experience both Steve and Janette had growing up in Elizabeth, the couple inquired within; a small decision that ultimately fired Steve’s passion for childhood education, and led the family to become members of a Montessori School at Kingsford Homestead.

“I thought, wow, learning can be different than the worksheets I did every year of my life,” says Steve, who found the play based, nature driven Montessori approach to be a complete revelation, and pure, unadulterated sunshine for his cup.

“I packed in painting and I went to TAFE.” 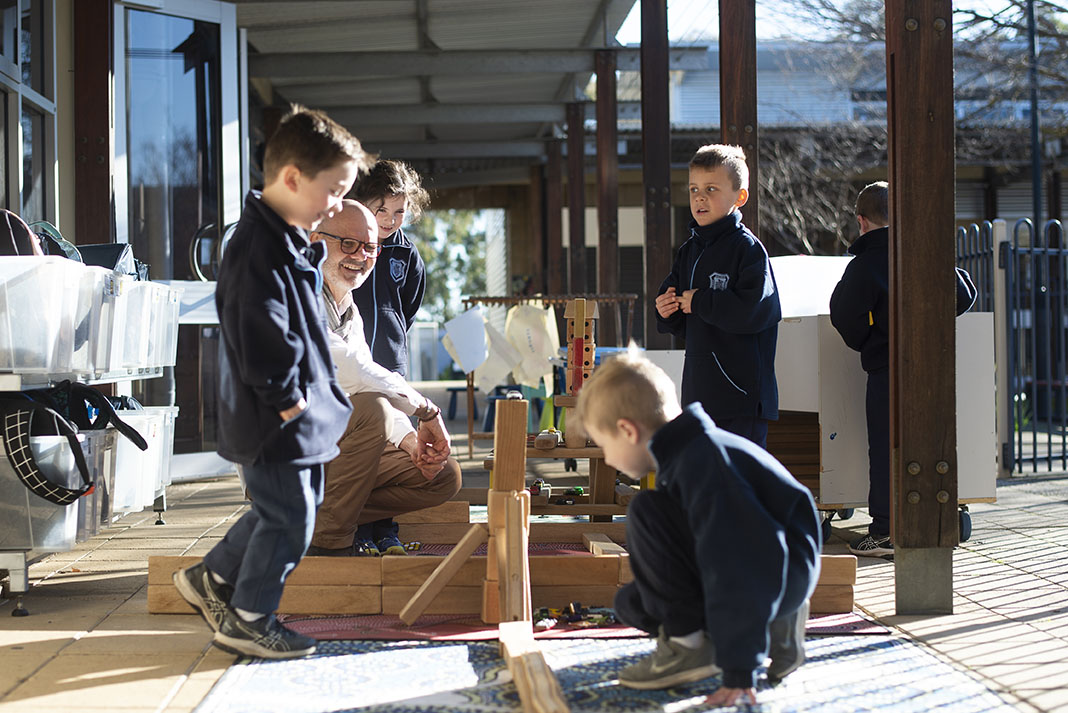 Today elements of Montessori still inform Steve’s teaching methods, however much like his eclectic personal style, he draws inspiration from many sources; Walker Learning Approach and Reggio Emilia among them, as well as practices taught by his much-admired TAFE tutor, Elizabeth Dau.

“She wrote a book called The Anti-bias Approach and that underpins what I do, actually,” says Steve.

“It addresses all the ‘isms’: racism, ageism, sexism, gender… I just soaked her up like a sponge.”

Challenging bias and celebrating diversity are linchpins to Steve’s teaching and he cherishes the moments he is able to broaden the perspective of a student.

He recalls wearing dress-ups during an English lesson at a school in Elizabeth some years ago. He was standing on a table wearing a tutu and waving a wand when a student’s father walked in to pick up his son early.

“The little lad came in the next day and said, Mr Valentine, my dad says you’re a poofter because you were wearing a dress,” says Steve.

“I made sure the next time that dad came in I was wearing a tutu.

“It can be so powerful when you can challenge those kinds of things. I love that and I still do it. But not just gender. Everything.”

“Mindfulness is huge in my class. We practice principles of yoga. We talk about our feelings and what things make you great and happy. What fills your cup.”

Aboriginality and multi-culturalism are embraced in Steve’s classroom rather than approached as tourist curriculum.

He himself has been an activist and advocate for indigenous Australians since he and Janette first learned about the Stolen Generation in the 1980s.

“As an educator, I’m always embedding Aboriginal perspectives into my curriculum, and addressing any misconceptions,” says Steve, who lists Kaurna Plains School and Islamic College among his previous teaching posts.

“It’s usually incidental, but I think that’s the powerful stuff when something arises and you can bring it in and weave it into what you’re doing.

“I think that’s why I like teaching, being able to address things, and luckily my points of view and values generally align with the Australian curriculum, it’s not like I’m banging my own drum.”

“You want to create flexible, successful learners, and the content slips into that,” says Steve.

“Mindfulness is huge in my class. We practice principles of yoga. We talk about our feelings and what things make you great and happy. What fills your cup.

“I hope I provide some tools for kids to self-manage their feelings and emotions, but also a belief that they can do anything, if you give it a go, try, you can be successful.” 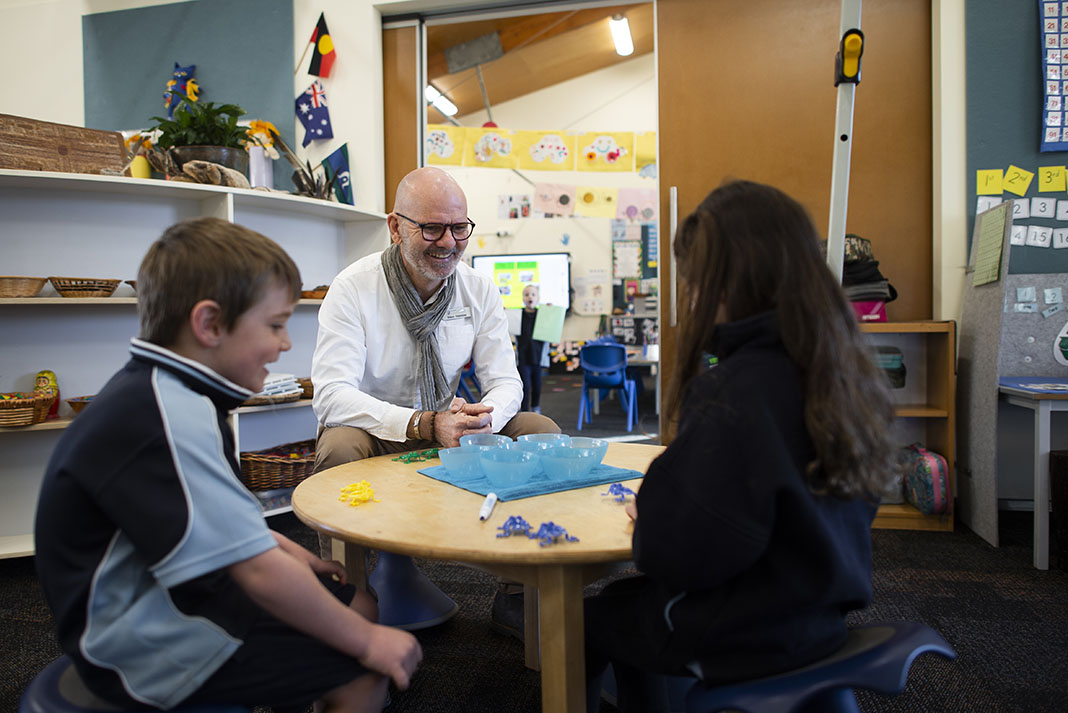 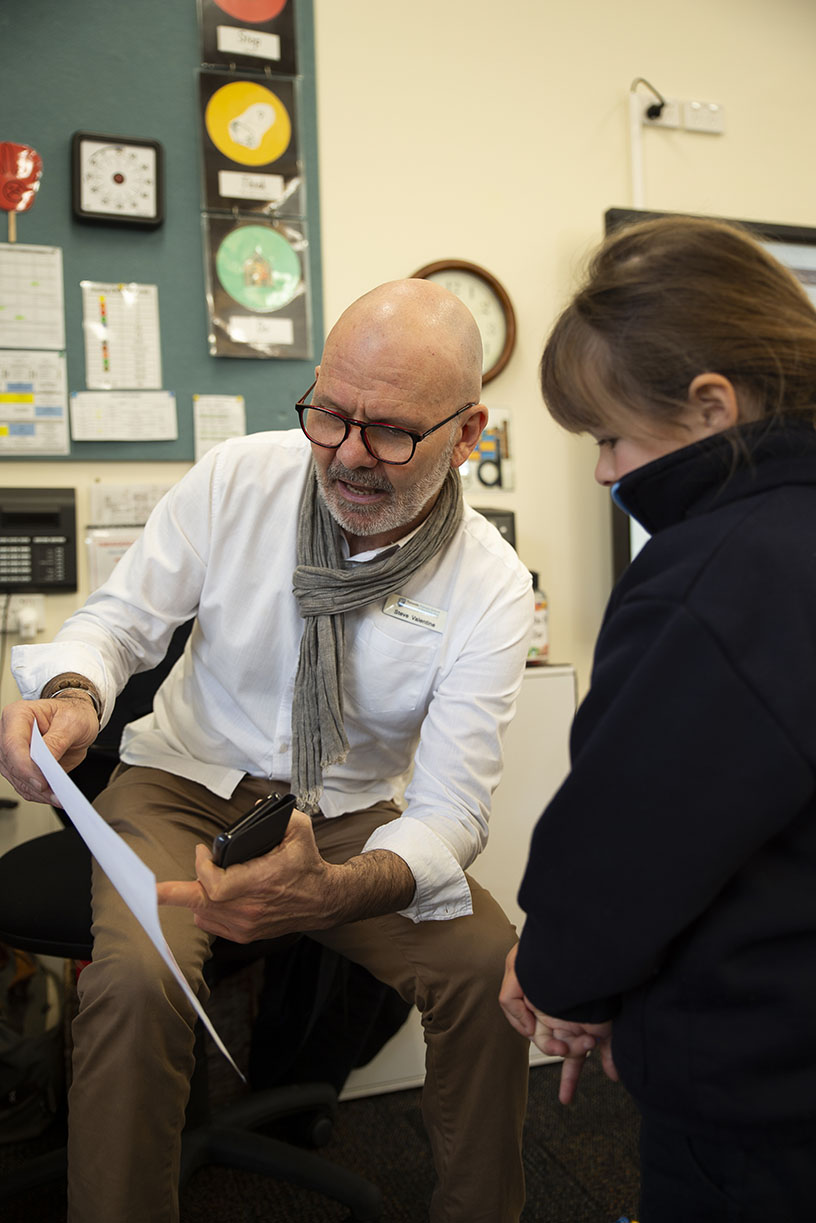 He chews his lower lip thoughtfully while surveying the empty classroom. It feels warm, resonant, charged with anticipation of another day of discovery; a vessel poised to receive its fill.

“It’s an eye opener when you see kids succeed in different ways, and often kids don’t succeed and you think, what’s their difficulty? Where sometimes you actually need to look inwards at your own practices,” he says.

“You learn along the way. You’ve never nailed it, because all kids are individuals.

“There’s no rubber stamp way of teaching or supporting children, which keeps it exciting. That’s why you do it, because when you do have that success with a child, it’s solid gold.”