Don’t ever tell Megan McLoughlin she can’t do something, she’ll prove you wrong.

To say this Tanunda mother of two is tough, resilient and inspirational seems an understatement, for this woman’s courage and sheer grit is something few can muster.

And muster is the key word.

This big-hearted farmer’s daughter with a wicked sense of humour is a master of “bringing the herd together”- not just cattle in the paddock, but also like-minded people with a passion for their communities.

Megan will tell you humanity is a herd and everything meaningful she does in life is about “having one’s back”, offering hope and caring for the wellbeing of others.

“People think I’m strong, but I don’t see it as strength,” Megan says.

“I see it as just wanting to be normal. I crave normality and in order to do that, I seem to do really unusual, extraordinary things in the hope that I can fit into society.”

Despite her best intentions, Megan is far from fitting into that box.

She’s a double transplant recipient and legally blind, not that you would know when meeting her for the first time.

Megan won’t use a cane, even though she admits the scars on her legs say she probably should and there’s been many a time she’s been speaking to a pot plant or wheelie bin and wondered why it hasn’t answered.

“A disability should not define who you are, it’s just something that happens,” says Megan.

Diagnosed with Type I diabetes at the age of 8, Megan quickly discovered an inner toughness.

“Being a young kid that rode horses and did sport and a lot of outside activities, it was a bit of a shock. All of a sudden they are telling me I can’t do anything. My parents were completely against that, so I kept riding my horse, kept playing my sport and kept doing everything.”

At the age of 12, the medical profession painted a very bleak future.

“I had a doctor say to me, you are going to lose your legs, your eyesight, your kidneys and you are going to die before you are 30 because that’s what diabetes does to you…it’s a daunting thing to be told.

“I decided to ride my horses from Melrose in the Flinders Ranges where we were living, to Adelaide to raise awareness for Juvenile Diabetes.

“We raised $25,000 and a lot of awareness… I road through King William Street, down Sir Donald Bradman Drive to the diabetes headquarters. It was an amazing thing – don’t tell me that I can’t do something when I am quite able bodied!”

A keen horse sportswoman, she excelled at barrel racing and went on to win seven state titles, five national titles and a scholarship to a university in Georgia, America to compete as part of the college’s horse team.

“I studied animal science, so pre-vet, large animal husbandry. Returned home and got a job with an animal health company, living in Sydney and loving life!”

Work led her back to South Australia until one day, she ended up in hospital after getting “a bit of a headache”.

Diabetes had damaged her eyes and she needed surgery to remove some blood vessels that had formed.

“They over lasered my eyes and within three days, I was legally blind. Basically, at the age of 26, I was left with five per cent of vision in my left eye and three percent in my right eye. I have no peripheral vision or depth perception.

“About three months later, I went into renal failure…I went from 66 percent of function to 23 percent in three months…then when they realised my function was at 7 percent it was a Friday afternoon and they said I wouldn’t last the weekend so they put a central line straight into my artery into my heart and accidently nicked a vein.”

She laughs at the scenario, saying she must have had Dr. Seuss, but the “accident” proved to be a blessing.

“I lost three litres of blood but it saved my life because I was so toxic.”

Now on dialysis, Megan returned to Sydney because she feared missing the flight for the transplant she so urgently needed.

“In November, 2010 the doctors said you need to get your affairs in order because you won’t’ be seeing Christmas this year…I left that appointment and thought well, hope is stronger than fear and 0.01 percent is better than nothing. It was probably not the right attitude to have, it’s not the reality. But it’s what got me through.”

That much-awaited phone call did come.

“December 20 I was at home and being legally blind, my phone tells me who’s ringing and it started chanting “Sydney Kidney Doctor”. I answered thinking there was something wrong with my bloods and it was my transport co-ordinator.

“He said how would you like some organs for Christmas? It’s really hard to receive that call. You go oh, my life’s been saved and then you realise somewhere out there is a family who has just had their heartbroken. They’ve just had to say goodbye and in that process, saved someone else’s life. That is the most selfless act. They are grieving, their heart has been ripped out of their chest and they are thinking of other people? Amazing, just amazing.”

Megan had a new kidney and pancreas and whilst she struggled through what can only be describe as an emotional roller coaster, she was a survivor. 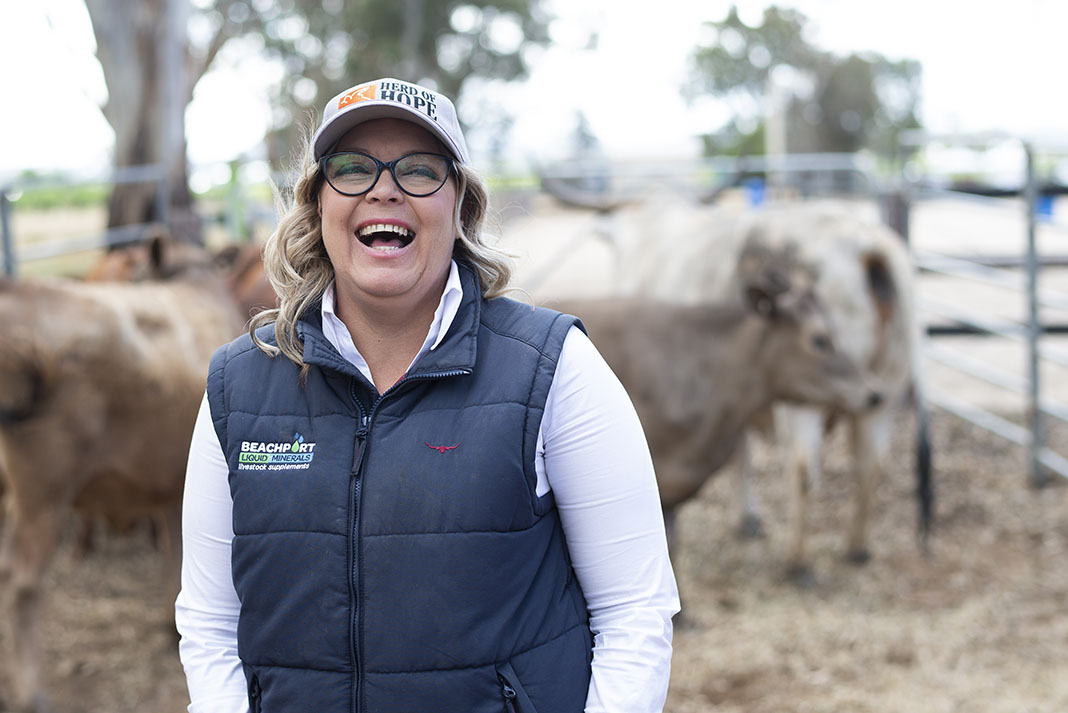 “We wanted to create awareness… We are 23rd in the world at organ donations, why are we so poor when we have the most successful transplant results? Something has to change.”

Now it was time to embrace this second chance at life.

Being so sick for so long meant her love life was non-existent, so she asked a friend back home in the Barossa to get her a date.

“I was that desperate… I was passed this bloke Mark’s email address. We arranged to catch up for coffee one Sunday afternoon… that’s the Mark I married!” Megan laughs.

“The worst thing is it wasn’t until our third date that I told him I was legally blind – don’t tell me women aren’t calculated! I had stepped in something after we had left a restaurant….he goes didn’t you see that? Well, funny story! He asked do you see the sign up there? I go nup. The pole? Not really… he’s pointing to all these things. He’s gone, do you see me? I’ve said sometimes and he just stood there, reached forward and grabbed my hand – that was it.

“We argue who was more desperate because he’s eight years older than me and he married the blind, transplant recipient!”

Married at Collingrove Homestead, the couple settled in Tanunda and Megan became the first double transplant recipient in South Australia to have a baby.

“I had Sam at 36 weeks and one day. He was the most successful baby born in the world to a double transplant recipient because of his gestational period.”

Baby daughter, Ella entered the world soon after and Megan and Mark couldn’t be happier with how their lives have panned out.

Along the way, Megan founded the charity “Herd of Hope” and decided to take 40 head of cattle from the Barossa to the sands of Bondi Beach, in a whacky idea that focussed the entire nation’s attention on the serious issues surrounding organ donation.

“We wanted to create awareness… We are 23rd in the world at organ donations, why are we so poor when we have the most successful transplant results? Something has to change.”

The successful event was a massive undertaking and brought volunteers and supporters from all walks of life to join together for a common cause which, much to Megan’s surprise, led her to being named the 2019 Australian Local Hero and Australian of the Year finalist.

Since then, the charity has raised funds to support donor families and organ recipients through a range of programmes.

“That’s the start of the journey. For that donor family and transplant recipient, the game’s just started. We’ve seen a huge gap in the services and have helped fund a study that’s proved we want peer support.”

As someone who is not afraid to say she’s survivor guilt, Megan admits to shedding “buckets of tears” over the 28 year old woman who died just before Christmas nine years ago, and gave her the gift of life.

As a result, she has become a strong advocate for mental health, with the recent “Day in the Paddock” initiative yet another example of Megan generating enthusiasm within her community to provide support.

“We’ve got to stop waiting for a tragic event to bring people together!’ she urges.

“We see it in organ donation all the time, in floods, droughts, fires. Come together on a positive note! As Australians, it’s always oh, we’ll deal with that tomorrow. Guess what? For some people tomorrow doesn’t come, so why not be the best you can be today?

“Have fun and laugh at yourself. I’m right where I am supposed to be, even though my road is a bit rocky sometimes. Sure, I take about 47 tablets a day, but I’d take 700 if it means I’m still here!”