They are “Brothers At War”, but surely it’s not all that bad?

Angaston raised siblings, Angus and Sam Wardlaw might have “war” in their surname but it’s not the reason their wine label does. Instead, according to Angus, the eldest of this double act, it’s just stating a fact.

“It’s very self-explanatory really. Sam and I were always at war growing up!” Angus grins.

“We are totally opposites in every way. We both started getting into the wine industry and when we sat down to talk names, it just made sense. Basically, we’re at war!”

Sam chimes in to make sure the current situation is revealed.

“We are a little bit better now…We obviously had different personalities growing up and then we came together over our love of wine,” Sam says – that sounds much nicer.

The banter between the brothers continues as they describe how their winemaking adventure began with just one tonne of Shiraz during their first vintage in 2013 to now crushing 50 tonne and producing an elegant selection from a number of grape varieties, including a premium, single vineyard range.

“We are totally opposites in every way. We both started getting into the wine industry and when we sat down to talk names, it just made sense. Basically, we’re at war!”

Sons of Barossa winemaking identity, David Wardlaw who worked under Wolf Blass when it was the most award-winning winery in Australia, Angus and Sam grew up surrounded by the industry.

Whilst their father was their inspiration, it was their other sibling, Andrew who was most influential.

“Our older brother, Andrew actually introduced us a lot more to the wine industry. Basically, as soon as we could, he had us out in the vineyard, helping to pick every vintage,” says Sam.

“Yeah, definitely making wine, being in a winery and in vineyards, that was Andrew,” adds Angus.

“He did everything very minimalistic. He’d be stomping on all the ferments, we were out picking fruit with him.”

All three Wardlaw brothers, now 41, 32 and 29 years of age, ended up in the wine industry although the younger two say it wasn’t inevitable.

“It just kind of happened. It wasn’t planned or anything,” says Sam.

“I never showed an interest until I was 22 and then got a job in a winery. Before that, I wasn’t a real big fan of wine. Angus was a lot more into it than me.”

“I wasn’t actually going to get into wine either,” Angus continues.

“I finished at Faith, and didn’t know what I was going to do at uni. I was going to have a year off as everyone does in the Barossa, but then I did my first vintage and never left!

“I suppose the wine industry was so normal. Dad never pushed us to be part of if, we thought we’d do something different than our dad and our brother. But, here we are!”

Angus and Sam put their differences aside and partnered with two other long-time friends to start Brothers At War, a celebration of Eden Valley fruit at its very best.

Both are still working full time at other wineries and have shared a similar journey in the industry. Angus worked at Clare based Kirihill Wines before returning to the Barossa as winemaker for Millon Wines, and Sam now works at Kirihill having moved there after a stint at Murray Street Vineyards.

“When Angus was still there (at Kirihill), we were making a bit of wine up there so I moved to Clare. He left and I stayed!” said Sam.

Life is hectic as they admit their “side project” keeps them extremely busy. There’s no time for sibling rivalry.

“Mornings, afternoons, weekends, holidays… Every spare second we get, we spend on this,” says Sam who clearly has a deep admiration for his talented winemaker brother. 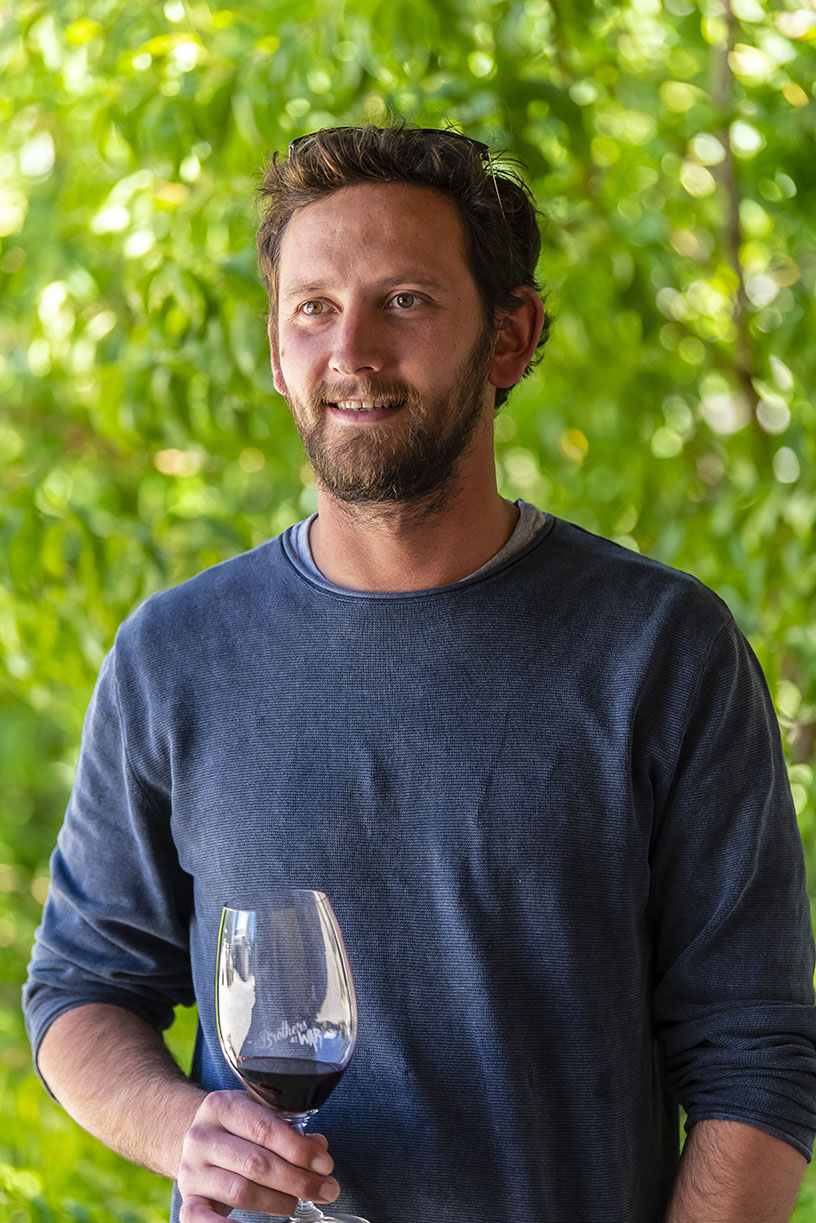 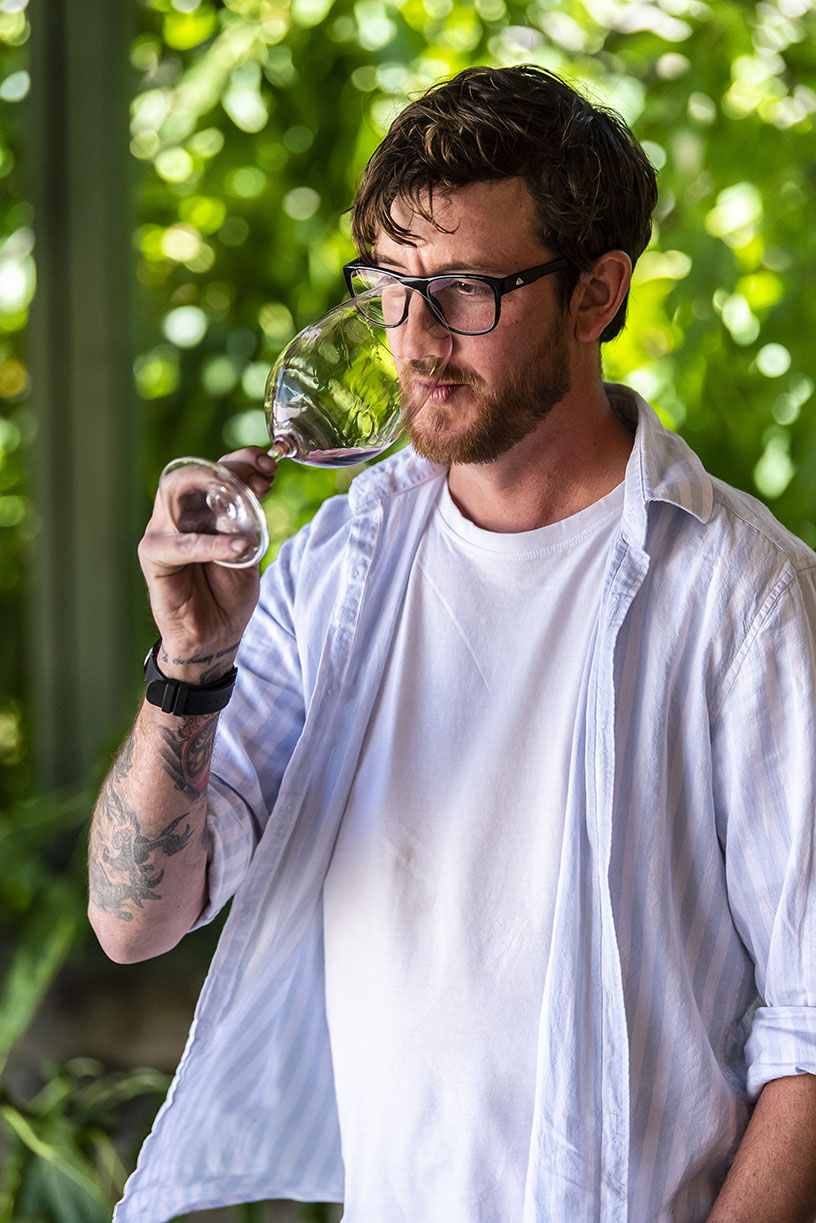 “Brothers at War” is impressing the critics too, with Angus recently winning an Encouragement Award for Up and Coming Australian Riesling Winemakers at the inaugural Canberra Wine Challenge and the wines receiving nothing less than silver at major shows around the country.

“The wines speak for themselves, in just the second year of making wine we picked up a few trophies at the Barossa Wine Show. We also won Best Small Producer that year too,” says Angus.

And their point of difference? Angus thinks it’s a relaxed attitude, not taking things too seriously and working with small parcels of fruit.

“We’re not wine snobs!” he laughs.

“I don’t necessarily follow any path that anyone has actually ever taught me…. I’m just doing my own thing.

“We’ll have different batches of fruit from all over Eden Valley and the Barossa and we keep it separate throughout its life. I love to blend, so come blending time for such a small amount of fruit we bring in, we’ll have 10-fold of different parcels that we can blend at the end. It’s what I like to do.”

With nearly 90 percent of their fruit sourced from Eden Valley vineyards, it’s a region they are keen to celebrate.

They’ve only just moved into their own winemaking space at Grand Cru Estate close to their source vineyards, which includes 90-year-old Riesling from the Kroehn family.

“We really want to promote Eden Valley for what it is. It tends to live under the shadow of the Barossa, even though as a region it’s consistently producing some of the best fruit,” says Angus.

They know there will be challenges ahead, having just weathered two vintages where there was “just no fruit”. But, if boundless energy is anything to go by, their goal of running a premium boutique winery and cellar door will become a reality sooner, rather than later.

In the meantime, the brothers look forward to using their own equipment for the first time this vintage, the adrenalin rush the busy season creates and seeing what wines they’ll come up.

And when asked what they prefer to drink? Their immediate answer is Riesling, but there is another.

“You can’t make wine without beer… and a lot of it!” laughs Angus

“You can’t have a successful vintage without a good supply of beer!”