William E Schultz was Nuriootpa’s first brickmaker, establishing a site in Fourth Street in the 1850s.

William died in 1910 and his obituary stated that his bricks were used in many of Nuriootpa’s oldest buildings including the old Post Office. Little evidence of this business remains apart from some red bricks embossed ‘W. SCHULTZ’

It was reported in 1903 that most of the output of bricks were used in the construction of new wine cellars, to keep pace with the expansion of vineyards.

After the death of HG Krieg in 1920, the Nuriootpa Brickyards were operated by his nephew, OJ Krieg.

A 1936 report states ‘the kilns produce a first class brick, together with glazed and ornamental lines, border tiles and other items for the builder’.

Around 1950 the business name changed to ‘Krieg’s Nuriootpa Brick Works’.

Production now included the popular ‘cream brick’, which was used in hundreds of Barossa houses and public buildings.

During the busy post war years, a couple small cottages at the rear of the brick yard were home to several immigrants that were employed by OJ Krieg.

These wood fired kilns were connected by a series of underground flues to a large circular chimney stack which was built in 1929.

The red brick chimney, decorated with a dark brick spiral, was reinforced with steel bracing after it cracked during an earthquake in 1954. 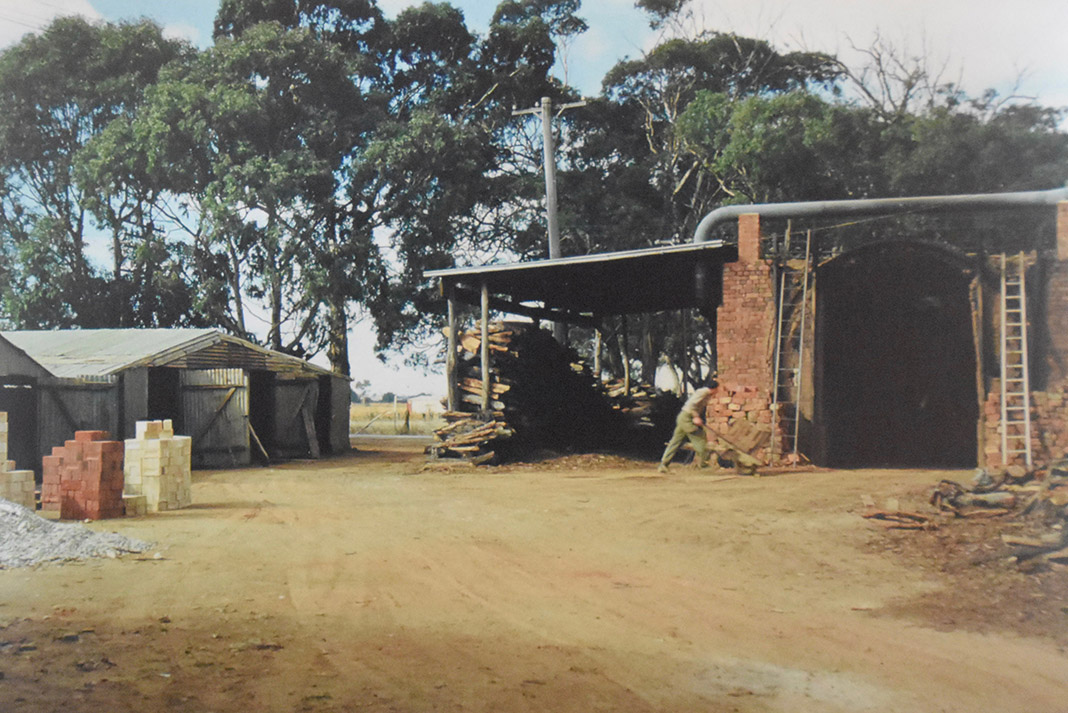 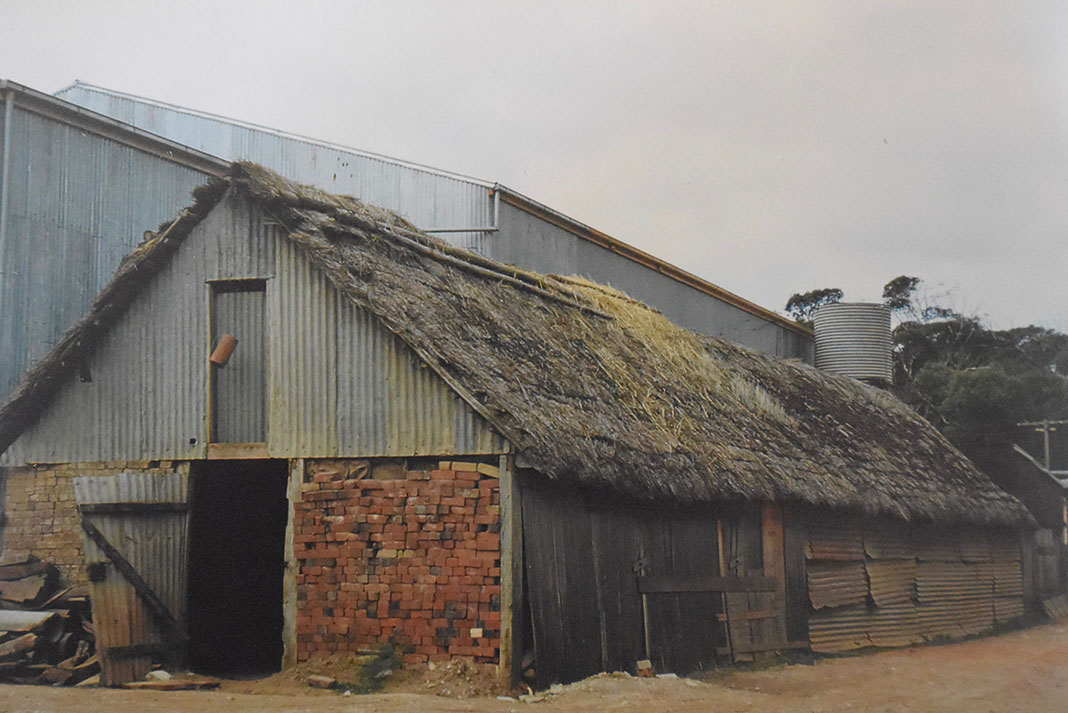 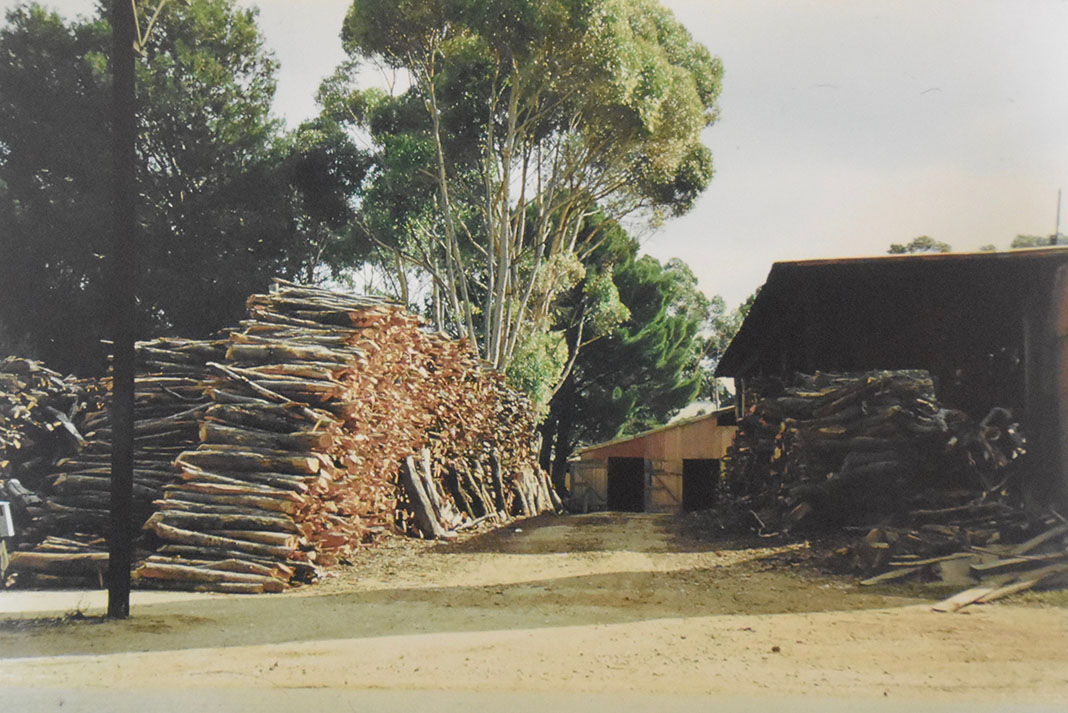 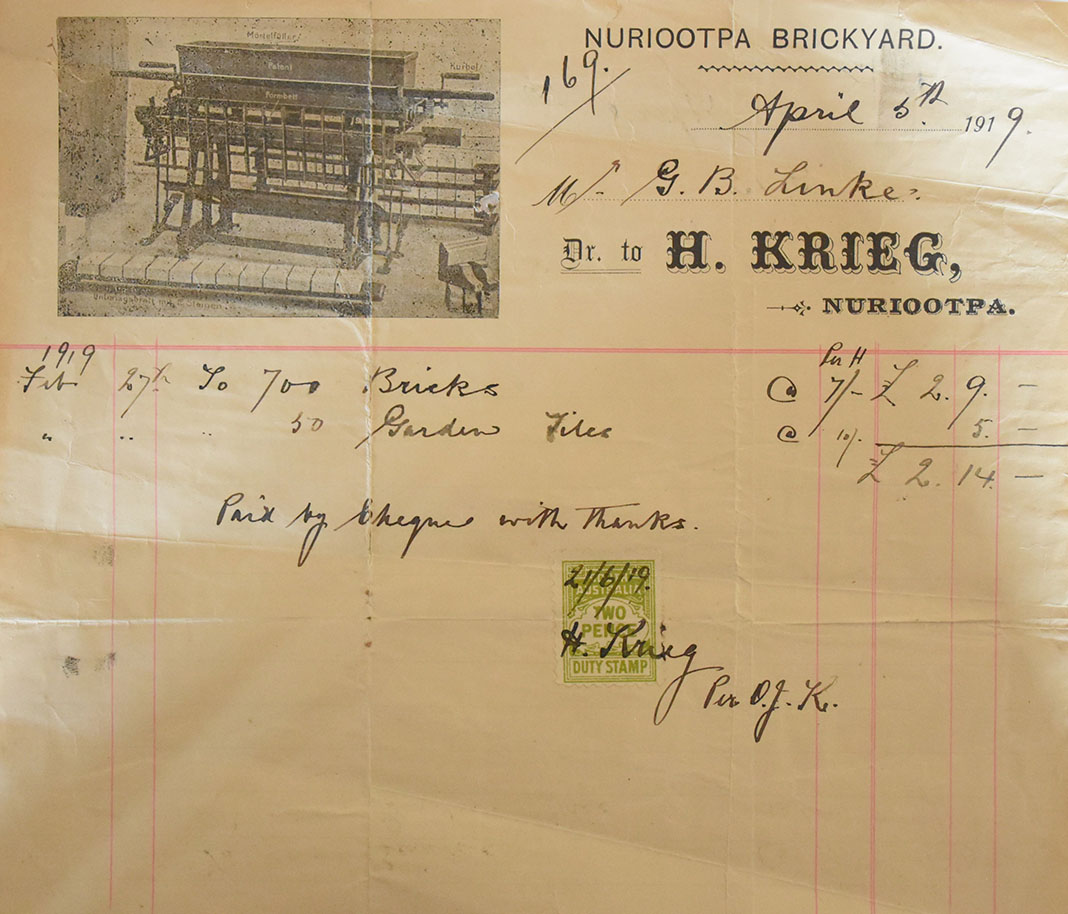 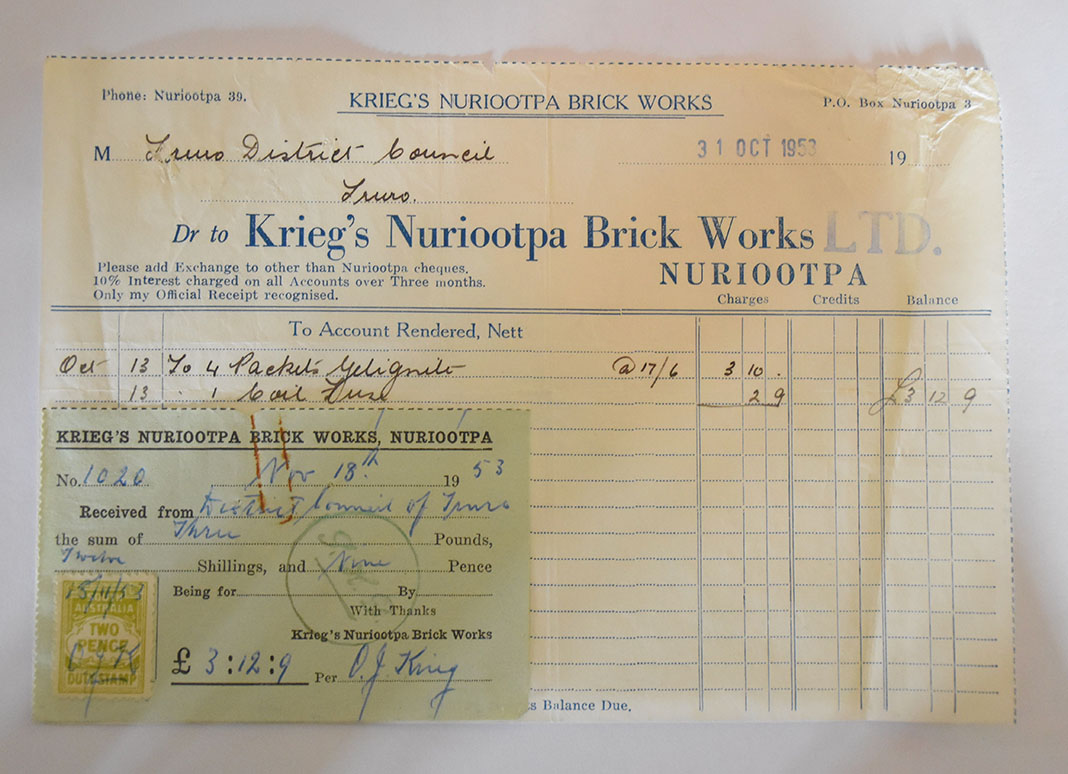 A report from October, 1911 stated ‘…local residents were awakened from their slumbers at 3 o’clock this morning by the vigorous ringing of the church bell and cries of ‘Fire!’..…’Mr Krieg’s brick sheds were ablaze…’ The old wood fired kilns were converted to gas in later years.

After nearly one hundred years, the Krieg family ended their brickmaking tradition in the mid 1970s.

In about 1976 the site became known as Barossa Ceramics, but output did not include bricks.

They instead produced clay pavers and tiles which were popular at the time. Barossa Ceramics remained in business for over twenty years.

The site was left unused for several years before being totally cleared in 2006, with Nuriootpa losing its large landmark chimney in the process. 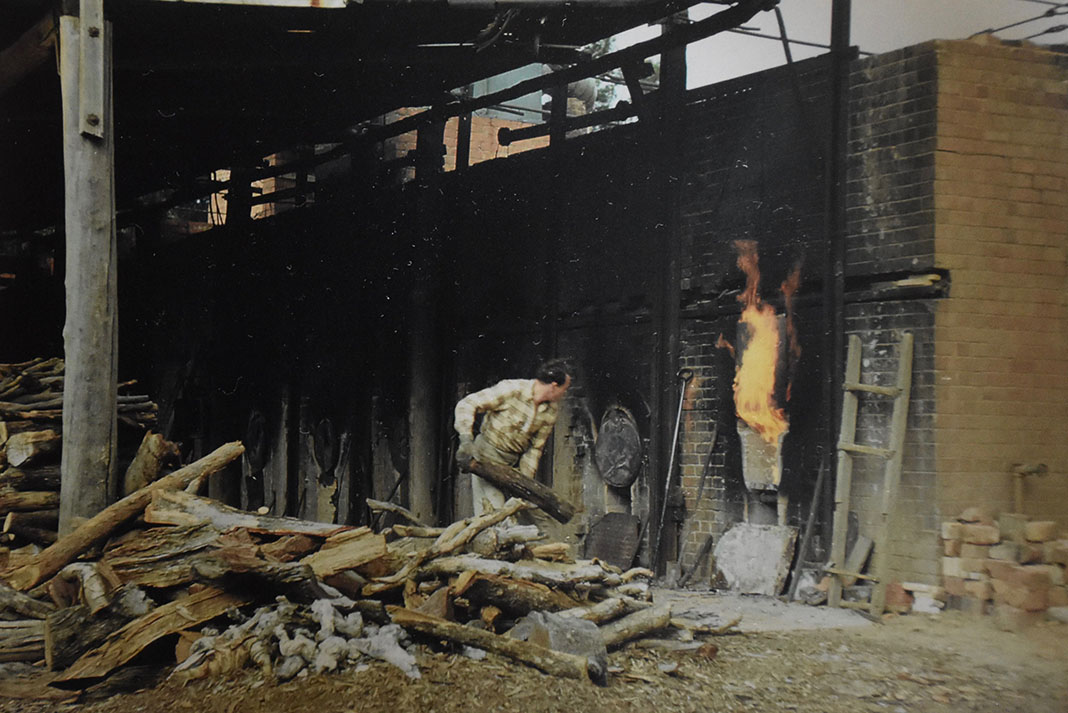 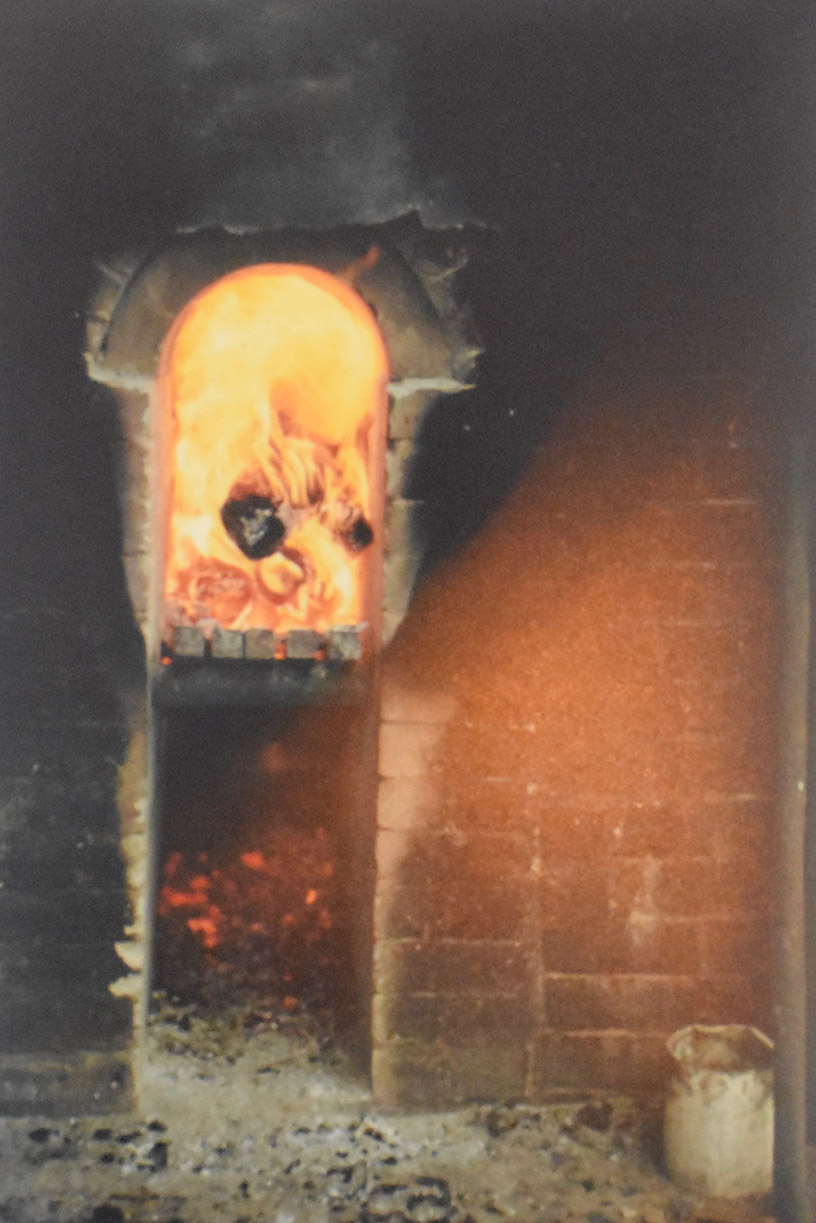