Last edition’s story on Barossa Canneries was just part of the Warnecke family’s involvement at Nuriootpa.

German settler, Ludwig Wilhelm Warnecke worked as a chemist and druggist in Nuriootpa from the 1850’s until his death in 1882.

His business was on the North side of Gawler Street, just back from the Murray Street intersection.

Ludwig is reported as being “a kind-hearted man of broad sympathies…..he often supplied medicine free of charge to those in want”

Ludwig and his wife Carolina had nine children. The eldest child, Ludwig (junior) followed his father’s trade as chemist.

In the early 1900’s Ludwig (Junior), together with his brother Carl, also operated a cordial and soft drink factory started by their father.

By 1917, Ludwig’s first son, Cyril (third generation Warnecke) was advertising ‘Cordials that please’. The business was operating under the Warnecke name until it was sold in about 1919.

The business was purchased by Bert Sayer who advertised his intent “to supply high class aerated waters and cordials at the lowest possible rates’.

However within a year he was declared bankrupt.

By October 1920 The Angas Park Co-op Aerated Water & Cordial Co. Ltd was formed to run the business; but by September 1922 the company went into liquidation.

In 1929 the building was leased by W Craig who used it as an auction room, and in November 1934 ‘The Leader’ reported that the ‘Nuriootpa Band has transferred its quarters from the [old] Warnecke cordial factory’.

In 1938 the property was bought by the Linke family who transformed the old factory into a butcher shop and residence.

Linke’s Butchers are still trading at the same site over 80 years later.

South of the drink factory stood the magnificent Warnecke house built in 1914.

Ludwig named his house ‘Arolsen’ – the name of his last born son that died as an infant.

The photo shows the Warnecke home with son, Cyril Warnecke in his car.

Sadly the house was demolished in 1970 to make way for Community Store extensions (now Toyworld & carpark).

During demolition a bottle was located under the old foundation stone.

Its contents contained interesting hand written details of the Warnecke family, including the fact that a flour mill owned by Mrs Warnecke’s father, FW Reiss, stood opposite the Warnecke house. (The mill burnt down in 1879)

Most of Warnecke’s old Nuriootpa drink bottles were embossed glass – styles include a ‘round ender’, various ‘marble’ bottles and a ‘lamont’ bottle.

These bottles are lasting reminders of a Nuriootpa family enterprise that finished 100 years ago. 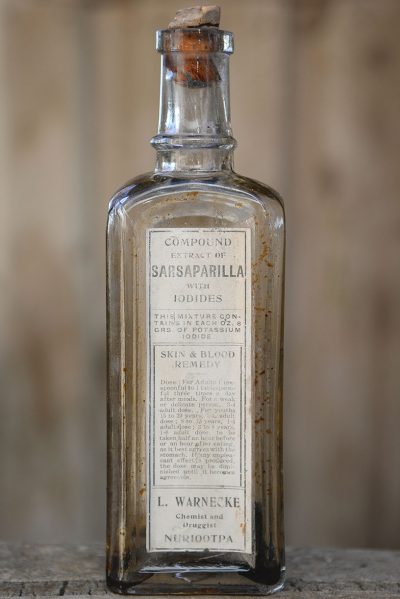 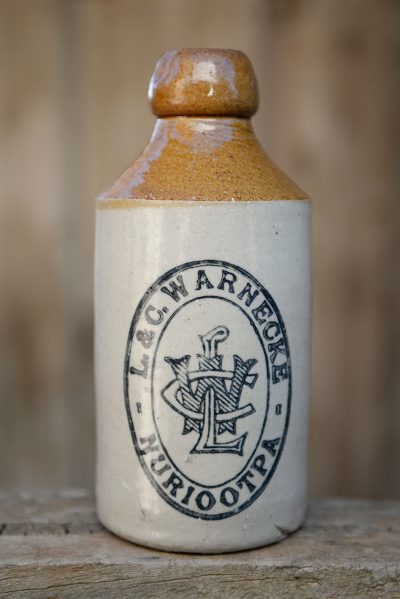 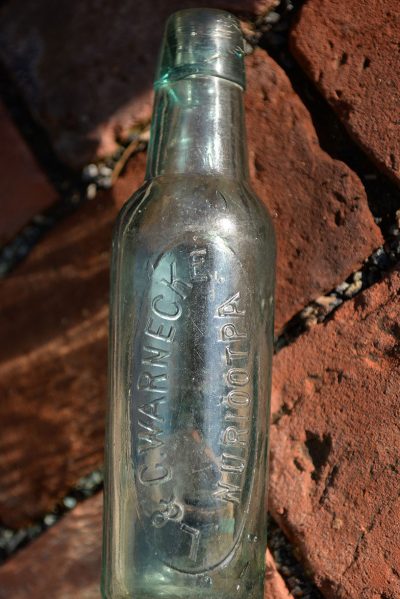