A day with Dudley

A day with Dudley

“I like to think I’m a bit of a know it all,” smirks Dudley Heintze.

Truth be known, at aged 83 this cheeky old timer does know a lot, but whether the information he has tucked away in his memory bank is considered useful or not, well that’s up to the listener.

He dusts off an old chair in his shed filled with rare vintage cars and spare parts; pulls up next to his buddy “Socks”, a black and white cat named for obvious reasons, and settles in for a yarn he says could take awhile.

You see Dudley’s someone past generations might call a “Barossa Deutscher”. He describes himself as a “good old German boxhead” and he’s proud of it – you won’t find any of “that P.C. rubbish” here he says.

Dudley has a view on most things, but it’s his vast collection of vintage vehicles scattered about his Koonunga property that puts this character into a league of his own.

His rusty relics lay peacefully around the yard, some with trees growing out of engine bays, others piled on top of each other or squeezed side by side like a giant’s library made of steel.

It’s here, on Saturday mornings, you’ll find car enthusiasts from near and far  ‘prospecting’ for treasure as they seek an elusive part to complete their vehicle resto projects.

One wonders how such a mass stockpile started. Dudley will tell you, but you need to start at the beginning.

“I went to school out Dimchurch, when we had the school out there, then went to Ebenezer, then went to Nuri High School. There were no busses or nothing, used to pedal there. Half the time I’d get a bl***y flatty and had to carry the bike under me arm!

“Anyway, at that time anybody over five miles from the post office could get an exemption from going.”

Dudley reckons he must have been about 14 years old when he took a job “over the hill” working for neighbour, Ron “Penny” Schulz.

“I was shovelling pig sh*t, cleaning the sties and all that sort of thing. I worked there for a shilling an hour, eight bob a day.”

He studied to be a mechanic through a technical correspondence course.

“I always fancied cars and trucks and all that,” he says.

It was whilst visiting a Tanunda workshop when he spotted the car that would start his collection.

“My first car was that black FX back there,” says Dudley, pointing to the vehicle in question under a dust cover.

“Michael Hoopy’s grandfather, old Fritz, bought that new, on the 19th of December 1948,” he says.

He launches into a detailed account of the car’s history, explaining how it had done 37,000 miles before being written off – something to do with some bloke’s cousin, a gravel road and a shotgun – this scribe got a little confused…

Anyway, it eventually ended up at Eddy Hage’s in Tanunda where it was destined for the scrap heap but Dudley disagreed with the vehicle’s terminal diagnosis. 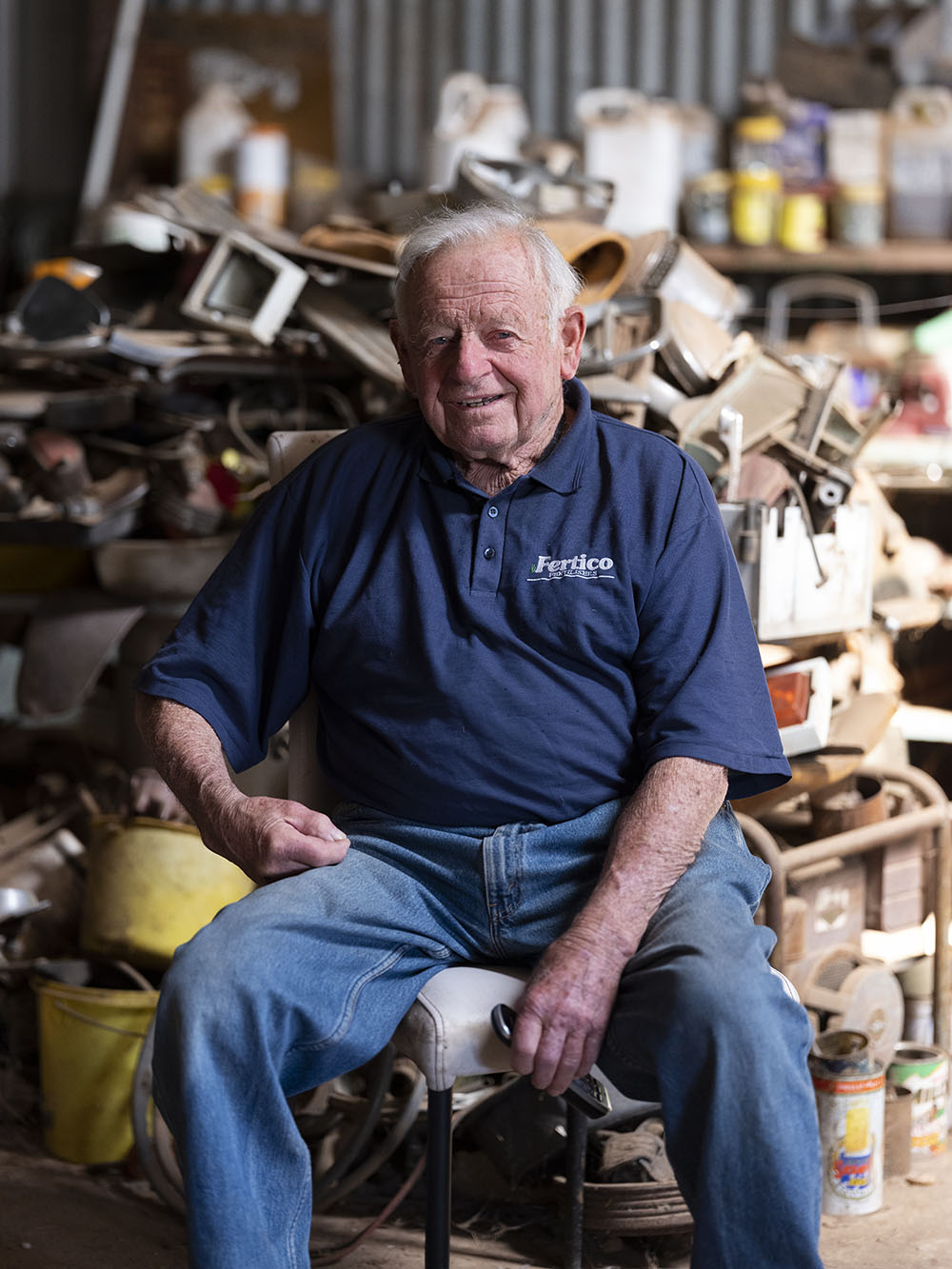 Dudley discovered he was onto a good thing, fixing up trade-ins and selling them on.

“I applied for a second hand dealer’s license because I was selling too many cars!” he laughs.

“Hage’s and then from Angaston there too, we used to buy all their trade ins… I used to get a lot from Vern Lynas that time.

“I still remember that HR ute back here,” adds Dudley, pointing to another one of his collection.

“That’s the last Police ute in South Australia. I started selling them when the EH Holdens were on. I got buddy-buddy with one of the sergeants down Thebarton. He used to go through them and let me know what was worth going for.”

The octogenarian continues detailing every car parked in his shed, including classics from Colin Zeunert and one from Nuriootpa High School teacher, Dulcie Sporn. Then there’s that “Mini over there” next to the two FJs and two Fxs.

“There’s my FE on the other side too, that was my drive-in theatre memory days, just fixing that one up,” he says.

Every car has a tale and he’s happy to tell you how he came to buy them, their former owners and who wants them “once he’s gone or whatever”.

Dudley returns to his own history as he reflects back to “old Max Grocke” who needed a hand and heard there was a young lad “pretty handy at welding”.

“I finished up being there for three years! He was tough, but by hell I got along well with him. Max taught me a few other tricks of the trade.

“I reckon that’s when I bought my first Bedford truck. I was about 23 I think and I paid 250 quid.

That old Bedford, which he still has by the way, led Dudley to begin the  carting side of his business.

“That’s when that all started off,” he explains, telling of the jobs it created. 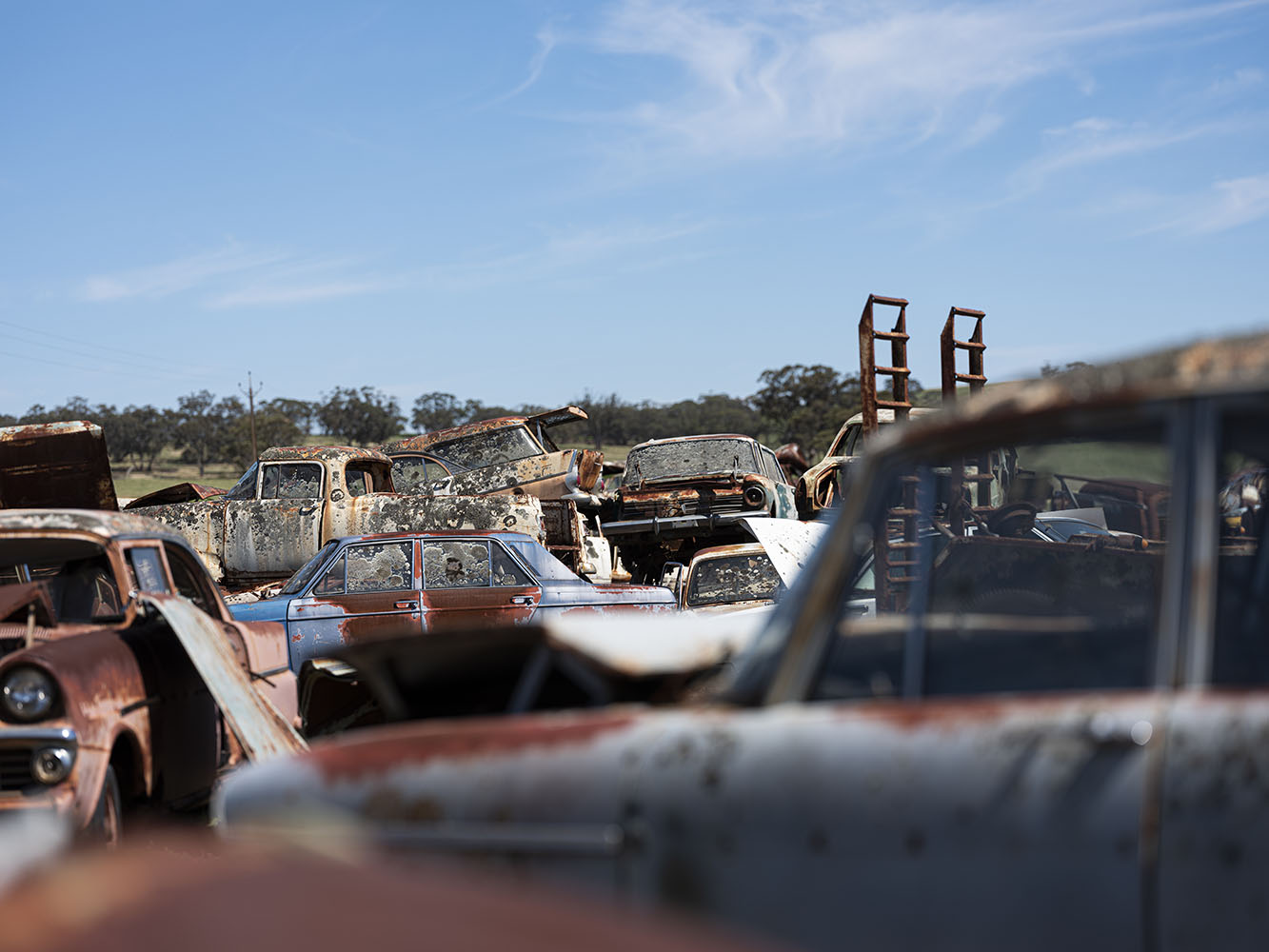 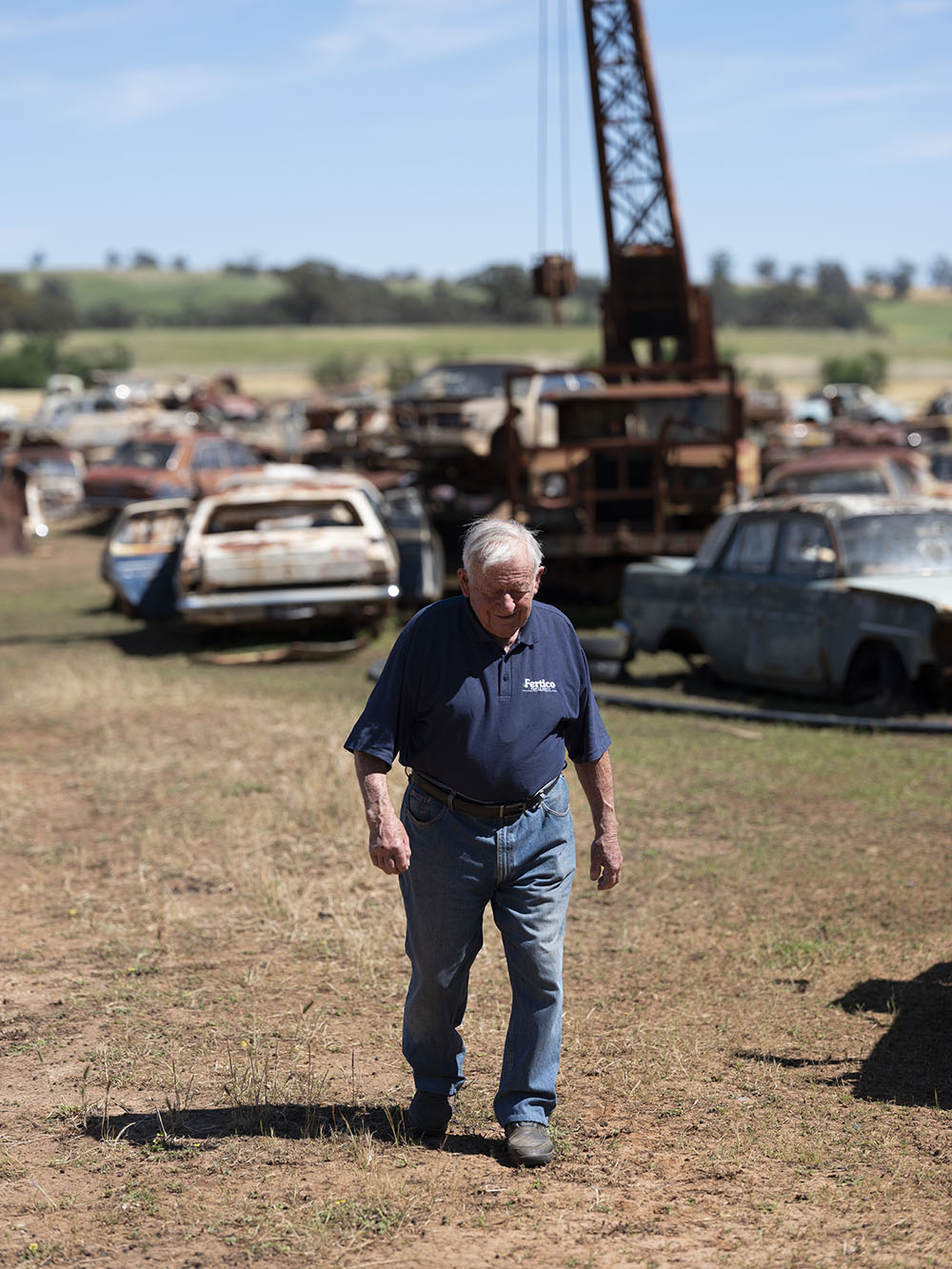 More trucks would follow, along with graders and loaders.

“I think we were running 5-6 trucks that time. We were doing seasonal work for Seppelts… carted wine for years. Then our marble quarry up here on the property, we used to cart rock to Adelaide, stone to Tillett’s and all them.

“I bought this big cat loader and I was paying 18 percent interest! I thought bl**dy hell!

“Duncan’s, the Holden wholesalers from Adelaide, they heard about me and signed me up. They supplied cabinets and spare parts and everything – all on consignment.”

Even today, Dudley has “brand new” old parts in stock and he knows exactly where they are stored, along with everything else on his 60 acre property.

“Then they went kaput and I was the first Castrol distributor in the Valley….used to have 50 drums of oil lying around here, all on consignment. I used to go to town once a week with the truck, picking up drums of oil. In ’64, I think, I topped the state twice in Castrol sales – never got any gold medals of course!

“Jomoico and Fertigo fertilizer, we supplied rock phosphate material for them as well and we used to do a lot of Council stuff.

“Maurice, my brother, was working here too. He had chooks and everything. I said righto, that must have been in ’56 or ’57, I helped him buy his Ford truck, so I gave him the Golden North milk run we were doing.”

At one point all four Heintze brothers were working together in the Koonunga workshop next door to the homestead where Dudley is the third generation of the family to live.

Maurice, Eric and Hedley moved onto other things and Dudley put on a few employees.

“I think I had five guys working here at one point,” he says.

“We used to build tip bodies, trucks…. All that sort of thing, bl**dy oath we worked!”

Dudley reckons he has in excess of 5,000 vehicles in the yard, not including trucks and tractors.

“Anything that was abandoned or crashed, the cops would take it out here. Wherever there was a bit of room, yeah, put it there, put it over there…you know.”

He has always had a good relationship with the police.

“Dirk Meertens used to say, you’ve been known to bend the rules but you never broke them!”.

Truth be known, Dudley has been able to get away with a few things in his time, but nothing too serious.

“I was playing E flat bass in the Nuri band and we weren’t allowed to drink on the job so of course to get the beers on the bus, we’d put them in the bell! We were pretty smart them days!”  laughs Dudley. 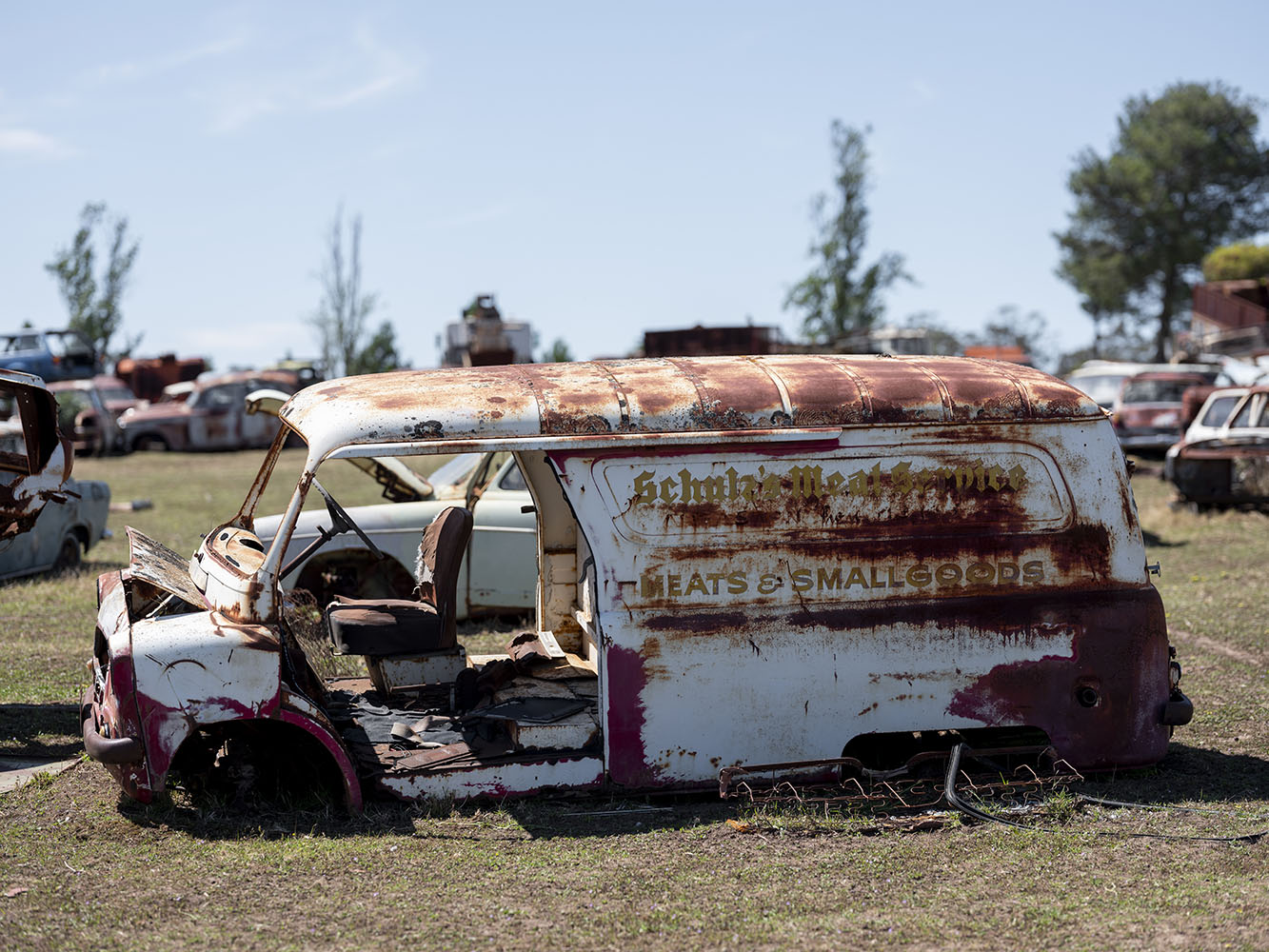 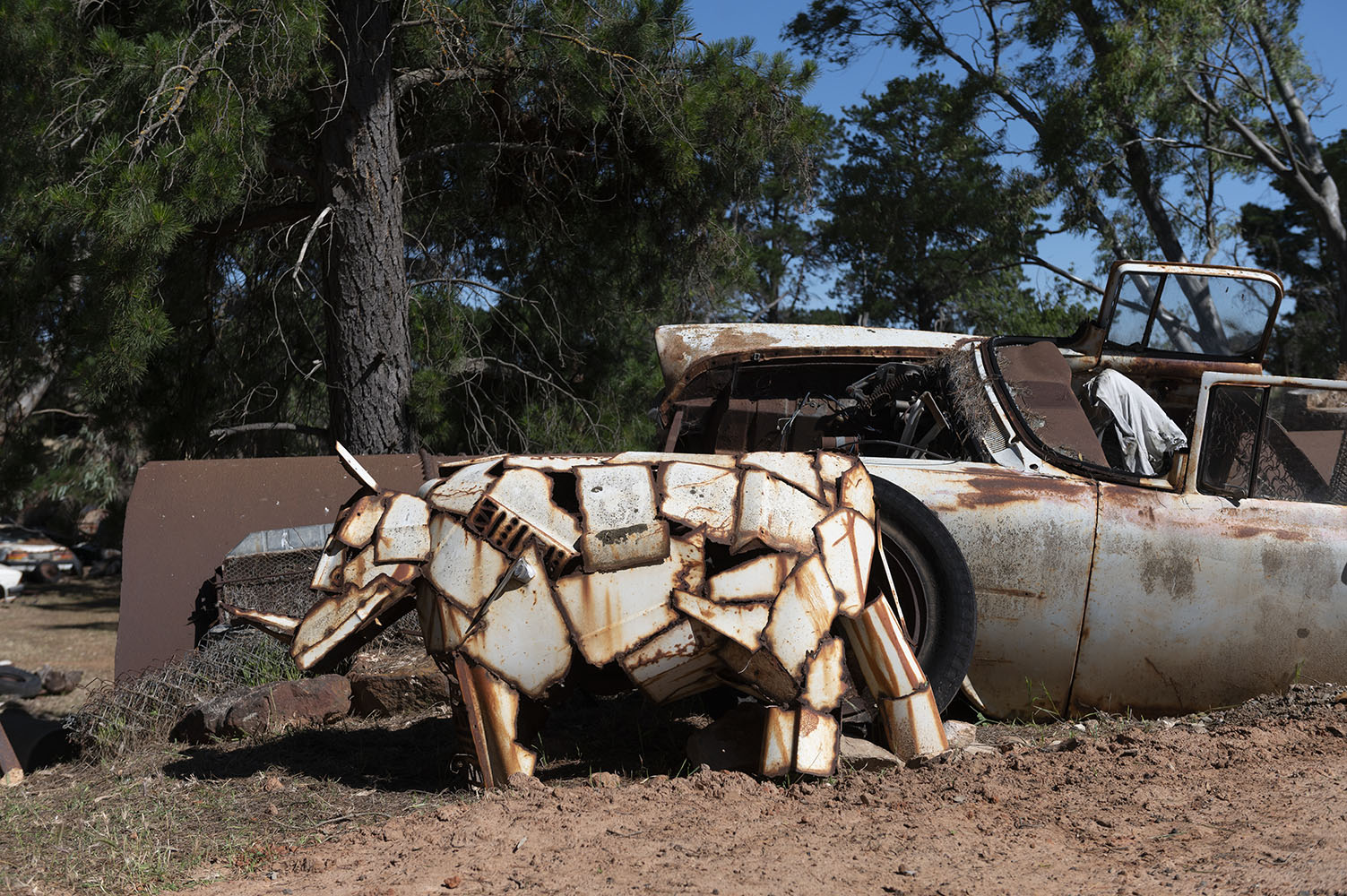 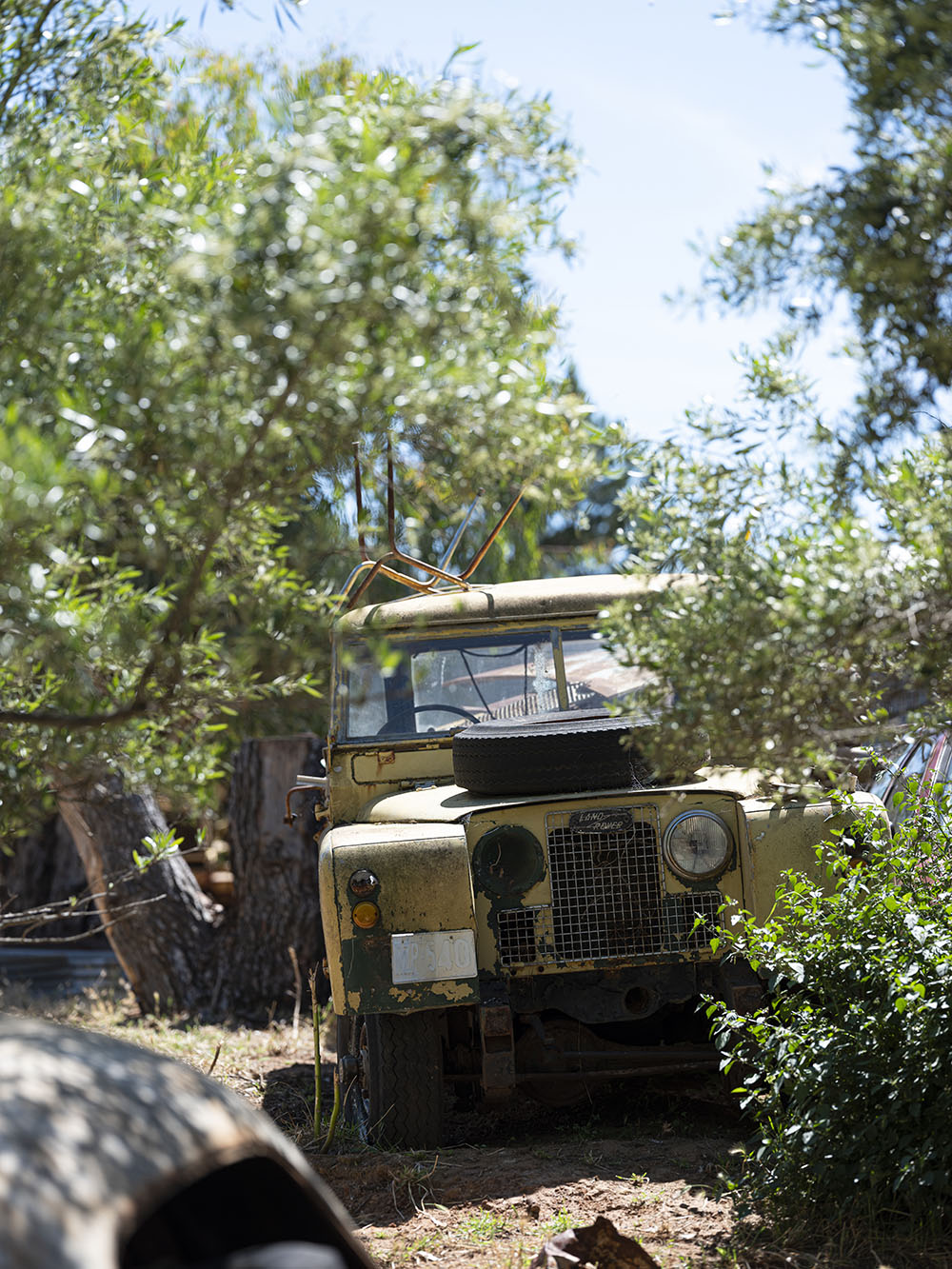 There are so many stories Dudley could tell, things he has done, fish he’s caught up at his old property in Mannum. He’s kept a “bl**dy big box” of day books detailing much of his work, along with a record of old Holden engine numbers.

But there is one bugbear Dudley can’t shake – he reckons they’ve left all the good bits out of the Barossa history books. Like the story about why he has a T in Heintze and others don’t or the day Lutheran ministers, Pastor Kavel and “Old Fritzy” went up to Kaiser Stuhl looking for the devil – apparently there were reports of “strange happenings” and Dudley believes it because when he was building a dam up there years ago, he had nothing but bad luck.

“Apparently, they sat up there and waited for a week and he didn’t turn up! Guess that’s a good thing,” Dudley chuckles.

With plenty of yarns just bursting to be told, this Barossan isn’t ready to hang up his work boots just yet. His strong Lutheran faith, “the only ones that will get to heaven” helps him on his merry way and he still has far too much work to do.

“It’s just old age that’s buggering it all up!” 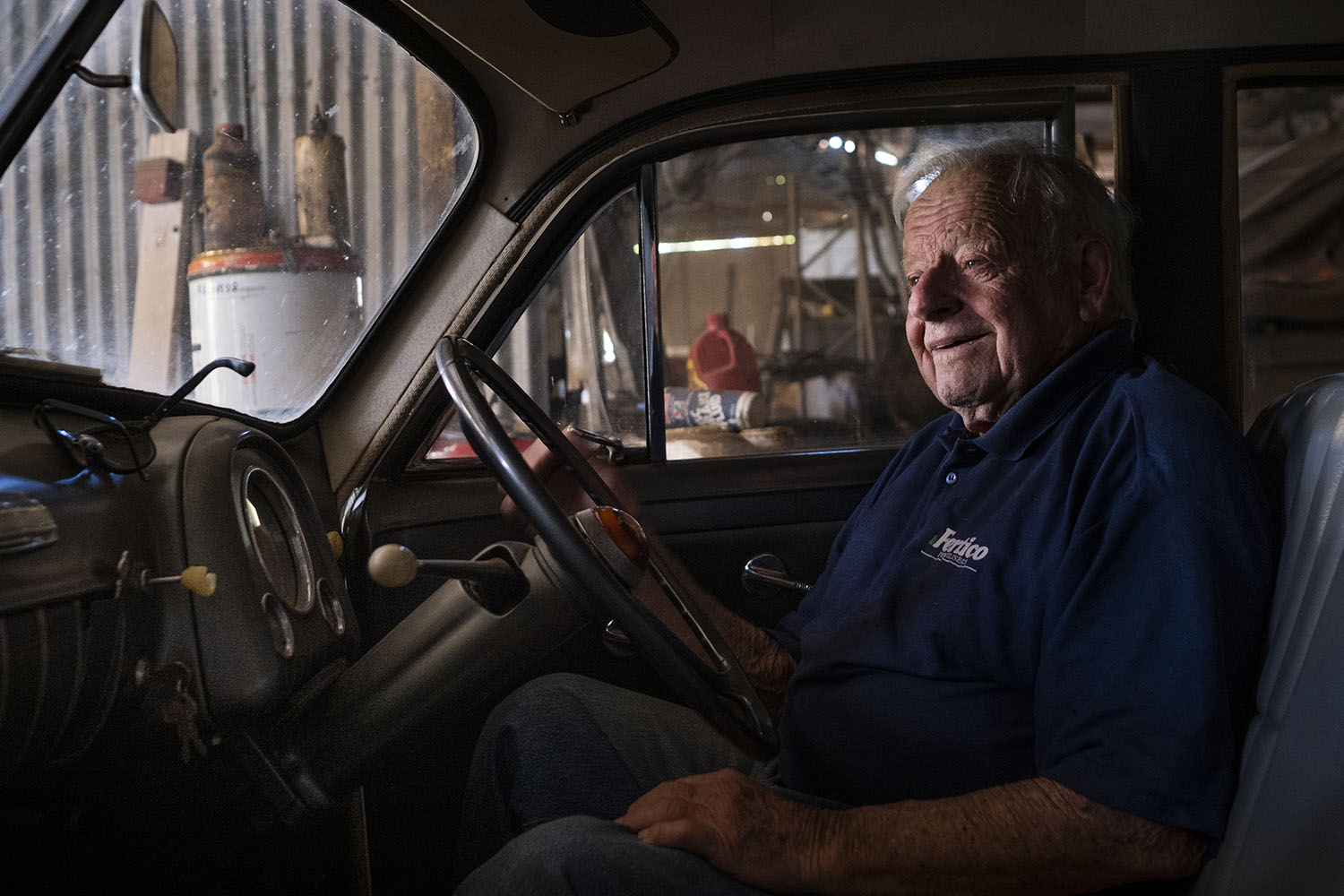