Corey Fechner has family history embedded in the dirt of Robinson Park.
But it’s the present connection he cherishes most.

Behind the polychromatic glint of his helmet visor, the 15 year old’s smooth face is set, his dark eyes focused ahead.

He breathes. Grips the wheel.

With a sudden spurt of grey smoke, he accelerates into the hectic fray of go-karts swarming the track at Robinson Park, Nuriootpa, home of Barossa Go Kart Club.

For the next eight laps of his heat, it’s just Keo and his kart, singing around the crescendo of turns; chasing the competitor in front and escaping the one behind.

“Being so close to the ground while going so fast with heaps of people, it’s just so thrilling,” he says.

“You’re just thinking of that and nothing else.”

From the sidelines, father, Corey watches on with a mixture of excitement and scrutiny.

He’s observing the kart; the way it’s performing on the track under the specific conditions of the day.

As Keo’s mechanic (“for lack of a better word”), that’s his job. 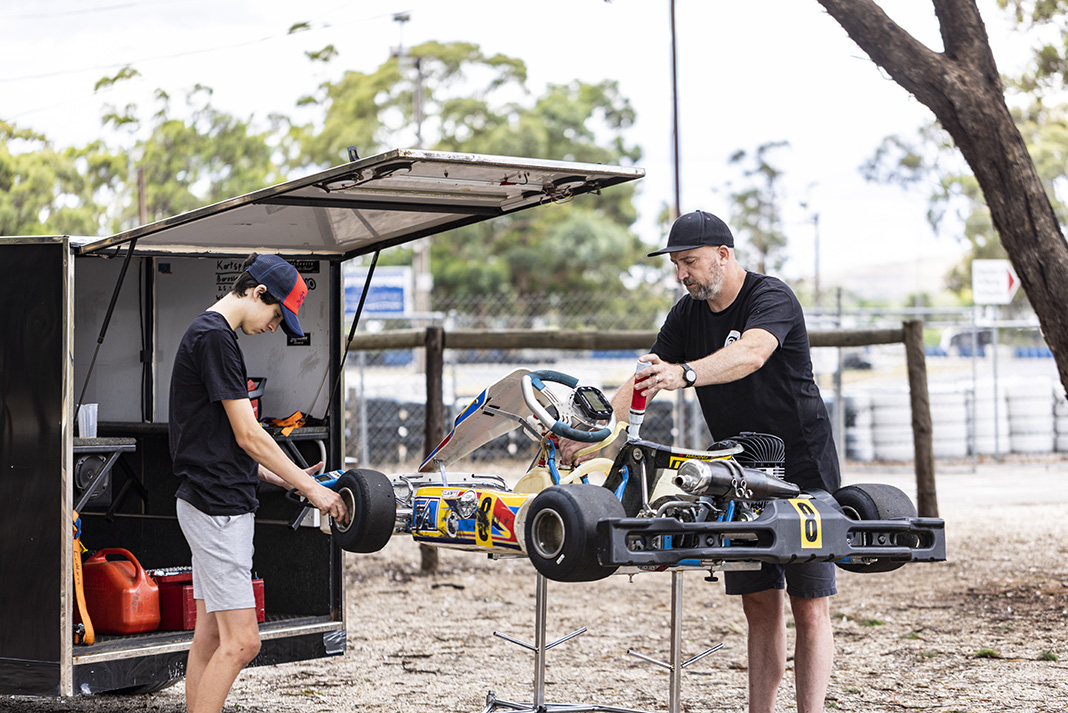 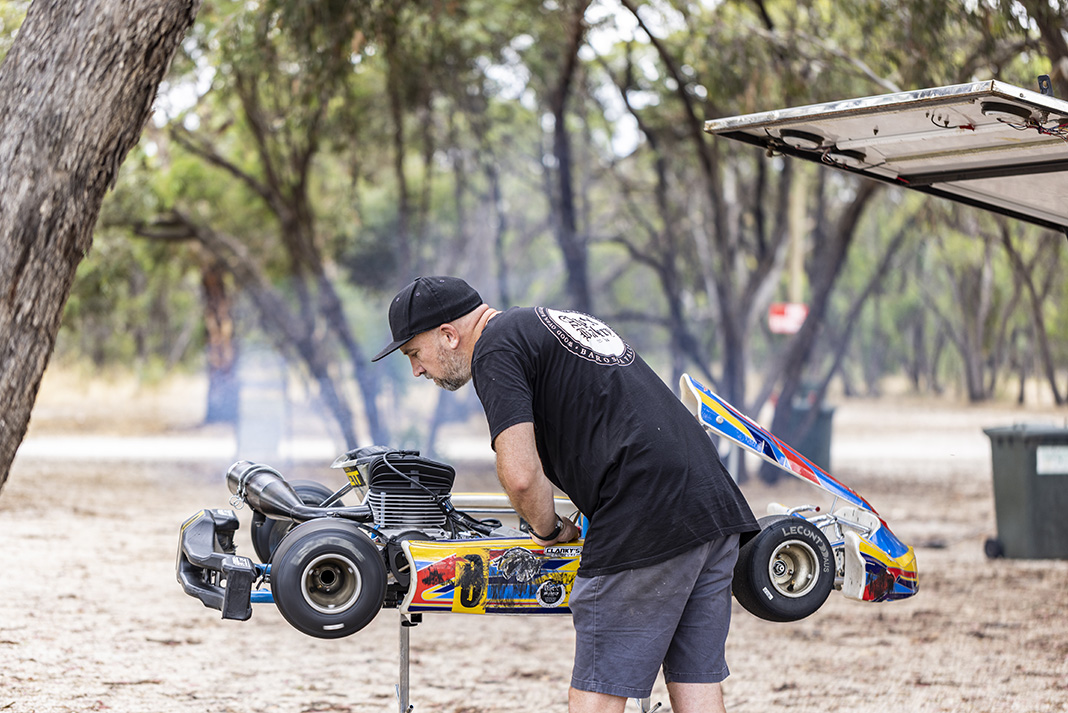 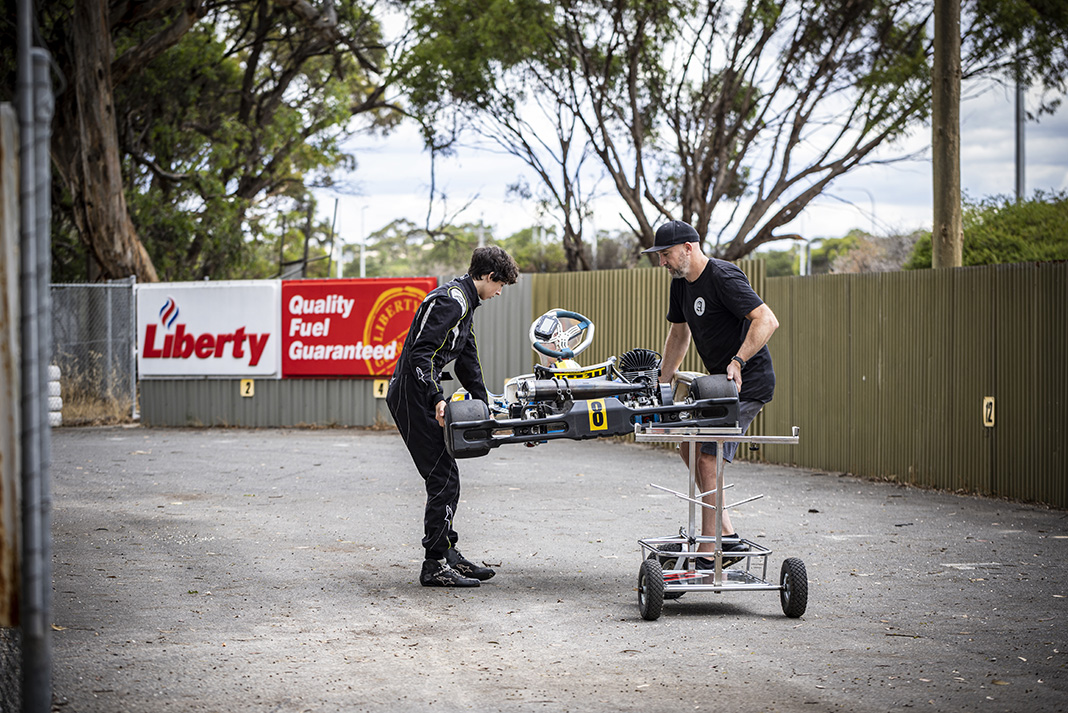 Momentarily, the flash and jostle of karts and the addictive waft of two stroke breaks Corey’s concentration to stir fleeting memories of standing at this same track some forty years ago.

“If you’re going to help me, you need to stay in the booth,” Corey hears his maternal grandfather, William Ramsey shout to his four year old self.

Reluctantly, young Corey tears himself away from the high-speed spectacle to return to the ticket booth where “Poppa” is collecting entrance fees.

It wasn’t until many years later, when Corey started Keo on karting and saw his grandfather’s name on the club’s honour board next to the likes of the track’s namesake, Kirkby Robinson, founder of The Leader newspaper, that he learnt the extent of his grandfather’s connection to Robinson Park.

“From what I understand Kirkby donated the land, and then I think my grandfather donated his time and machinery to create the track,” explains Corey.

Interestingly however, it was not through William that Corey got his proper start in motor sport—though those early days spent on Poppa’s knee at the track surely had their influence.

Rather it was thanks to his own father, Brian “Nipper” Fechner, a man better known around the Barossa for having flour on his apron more so than engine grease.

Second and third generation bakers at Apex Bakery, Tanunda, Brian and Corey followed in the footsteps of patriarch, Keith, who purchased the business in 1948.

In Apex’s kitchen on the corner of Elizabeth Street and Bilyara Road, the original 300 loaf wood-fired oven is still filled up to two and a half times per day, baking recipes Keith developed more than 80 years ago.

“We loved the car side of things because it would take us places and we would get to see things that maybe we wouldn’t. It was the spark that lead us somewhere.”

But it was Brian who first introduced motor sport to the Fechner family.

“On bread deliveries, when I was about 15, I’d be sliding around on the back roads in the delivery van,” Brian recalls with a chuckle.

“Dad would check the vehicle when it came back in and he’d see the grass stuck in between the rim and the tyres. I just loved driving.”

In later years, Brian got into Supersprints and Hill Climbs. He also has a deep affection for BMWs, being a founding member of the first BMW car club in South Australia, and its only Life Member.

Such was Brian’s obsession with motoring, Corey and his sister, Nicole’s formative years are peppered with memories of car events and race meets.

“Our childhood consisted of picking up cans at Mallala race track to try and make a bit of money, or travelling around to the different national car club events at Easter time,” Corey says.

“We loved the car side of things because it would take us places and we would get to see things that maybe we wouldn’t. It was the spark that lead us somewhere.”

Taking up Supersprints and Hill Climb like his father, Corey’s foray into motor sport offered him an adrenaline rush away from long hours at the bakery, and a shared interest with Brian.

It was only natural that in time, Corey would want to share that interest with his own son.

“That’s what I really enjoy about it, is I get to spend so much time with Keo,” he says.

“I know that sounds weird, we do spend a lot of time together anyway, but it’s something we share a passion for. We’ve got a similar goal.” 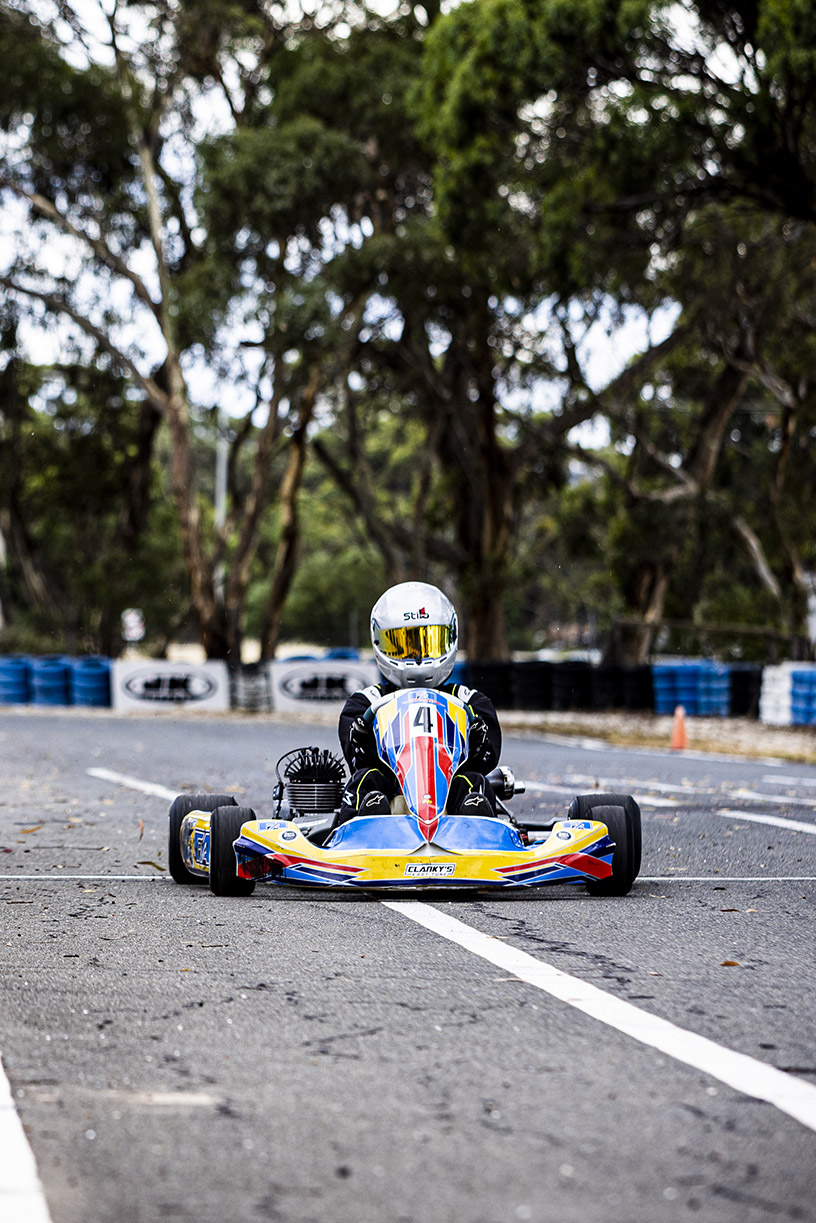 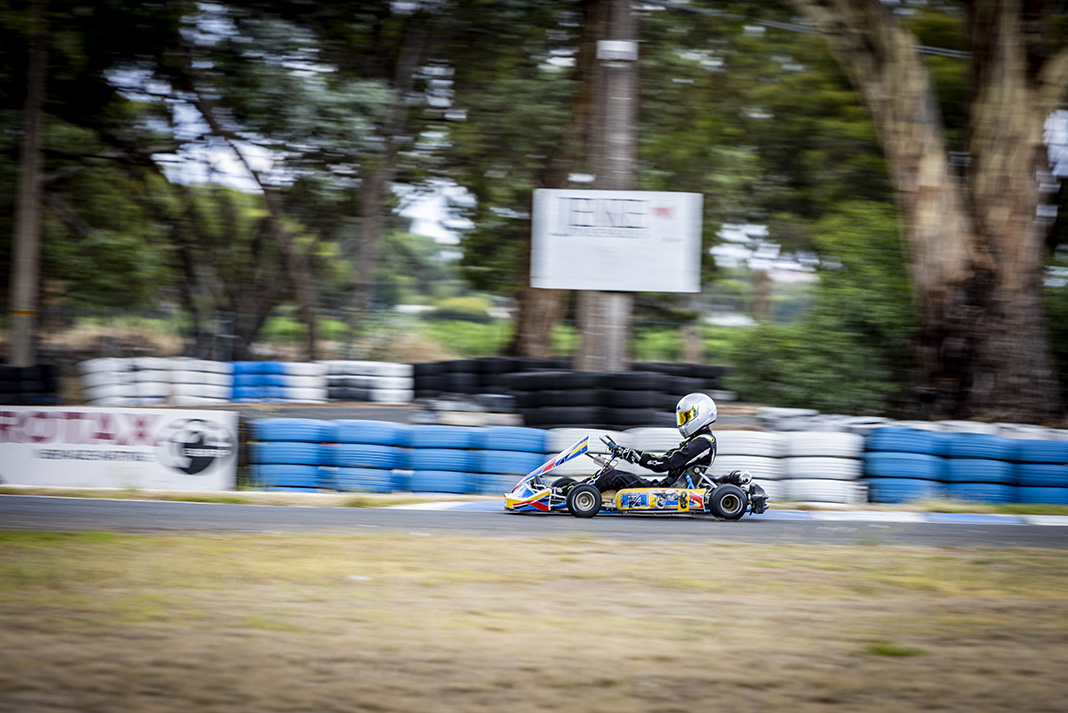 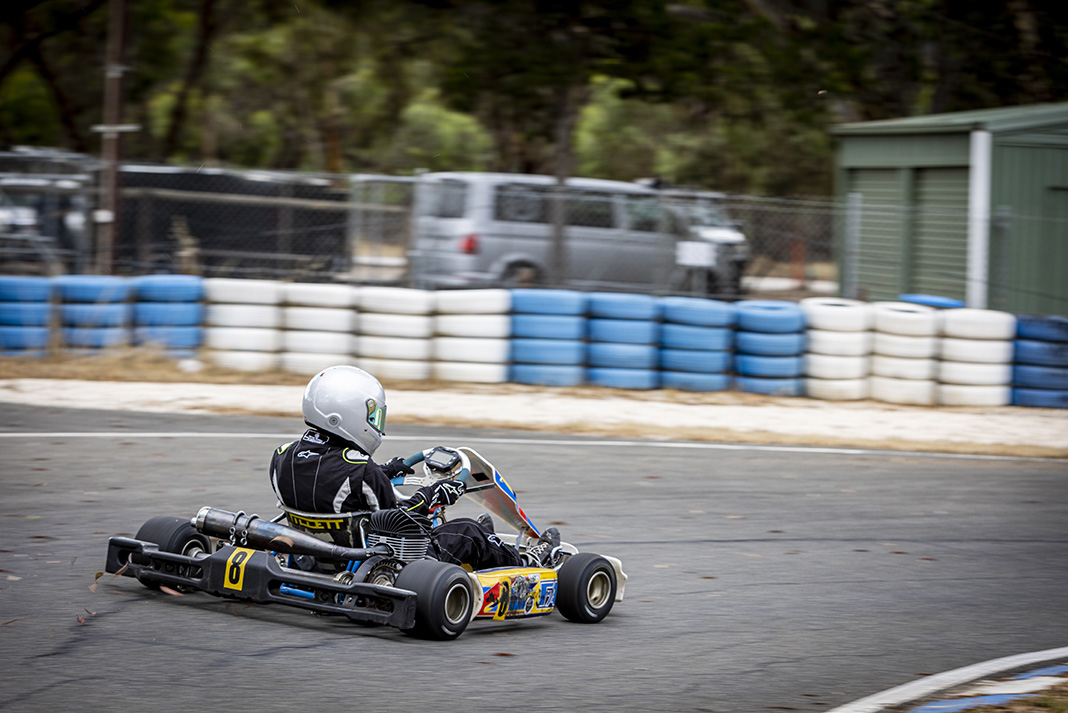 Corey turns his attention back to the track, where Keo is flying at close to 115km per hour.

It’s only been about 18 months since the teenager got seriously into the sport, but already he’s shown plenty of ability.

“In that time he’s moved up three classes and he’s won a state title in one class, and in the Australian class he came 12th out of 34 people at his first senior event,” remarks Corey.

After a day on the track, father and son debrief on the day’s events in a squat, unremarkable shed just metres from Apex’s faithful oven, surrounded by tools of the trade and towers of used kart tyres.

“Finding what he’s feeling and getting that information out of him so we can make changes to the kart requires a level of communication that not many other sports require,” says Corey.

“It’s that real close knit between driver and mechanic.”

For those who love this sometimes under appreciated sport, they will tell you that it is all about family and fun, as much off the track as on.

“A lot of time our connection is always while he’s at work or something,” adds Keo.

“But going to the track when it’s just him and me is different. It’s something that we both love.” 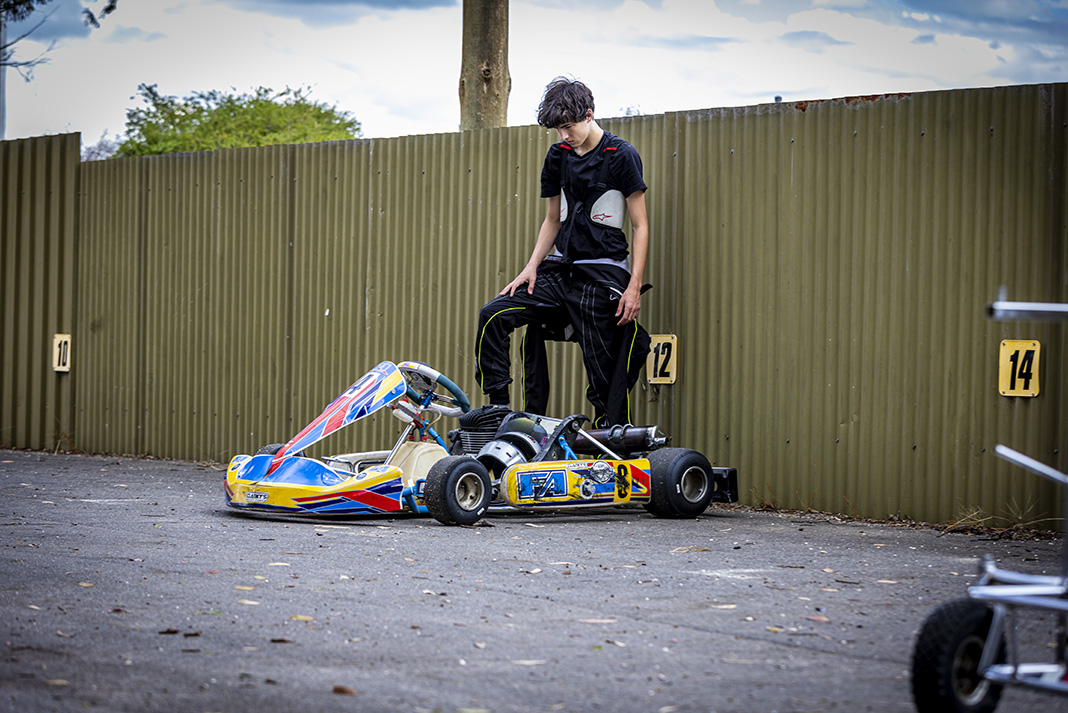