Shaun Blenkiron isn’t afraid of hard yacka – in fact you might even say it makes him as happy as a pig in mud.

The Keyneton pork producer reckons there’s two types of people in this world.

“Some live to work and others work to live – I live to work!” he says, clutching a cappuccino made from freshly ground South Australian roasted beans – the Blenkiron family pride themselves in supporting local.

It’s rare to see Shaun sitting so still in one spot for so long.

His strong work ethic stems from his dad, Michael and mum, Margaret, but the fact is, this thirty year old just likes keeping busy.

“I’ve always been that way, I find I have to be doing something.”

“He gets twitchy!” adds wife, Amy who is expecting the couple’s second child.

Their three year old daughter, Asher cuddles up to the bearded bloke and his trademark fluorescent yellow shirt – she simply adores every moment spent with dad.

This is the family behind Gumshire, a pig farm with pedigree and passion.

Last year was their best to date. They  doubled their ham production, despite a world pandemic, and continue to expand the marketing of a rare heritage breed Shaun introduced.

“It’s just different, everyone seems to like it. The breed’s so rare in the country now that the only way to save it is to actually eat it (or market it – that’s probably a better word!) and we’ve succeeded in that.”

Selling fresh cuts of pork, ham, bacon and small goods under the family’s own Gumshire Hampshire label at the Barossa Farmer’s Market as well as supplying some of the region’s finest restaurants, wasn’t something that happened over night.

“Mum and dad started the business,” says Shaun, handing the conversation over to “Marg” – he decided a long time ago that he quite likes calling her that.

“Dad’s from Angaston and Marg’s from Truro and they met in the middle!” he adds.

“Michael’s dream was to own his own farm,” Margaret continues, explaining how their first home was on nine acres.

“Then we bought this property here in 1998 and we still lived up where Shaun and Amy live now, two kilometres down the road,”Margaret continues.

“We always had pigs.”

Shaun still recalls the old German pig styes that were part of the first property.

“I used to clean pens out and feed pigs from when I was walking I suppose,” Shaun says.

“Dad got his first couple of sows just before I was born. Then we started here at this place with around 25 sows, now we are up to about 250.”

It was pretty obvious Shaun shared his father’s love for working with pigs, so when an opportunity came to help out at the Royal Adelaide Show, he was happy to oblige.

Shaun, by then, was showing his own pigs too and at the tender age of 14 was bidding against the big breeders at the Royal Adelaide Show auction.

This young pig farmer was expanding Gumshire Stud’s genetics and his competitive instinct had well and truly kicked in. He had his eyes on the prize  – a Grand Championship ribbon. 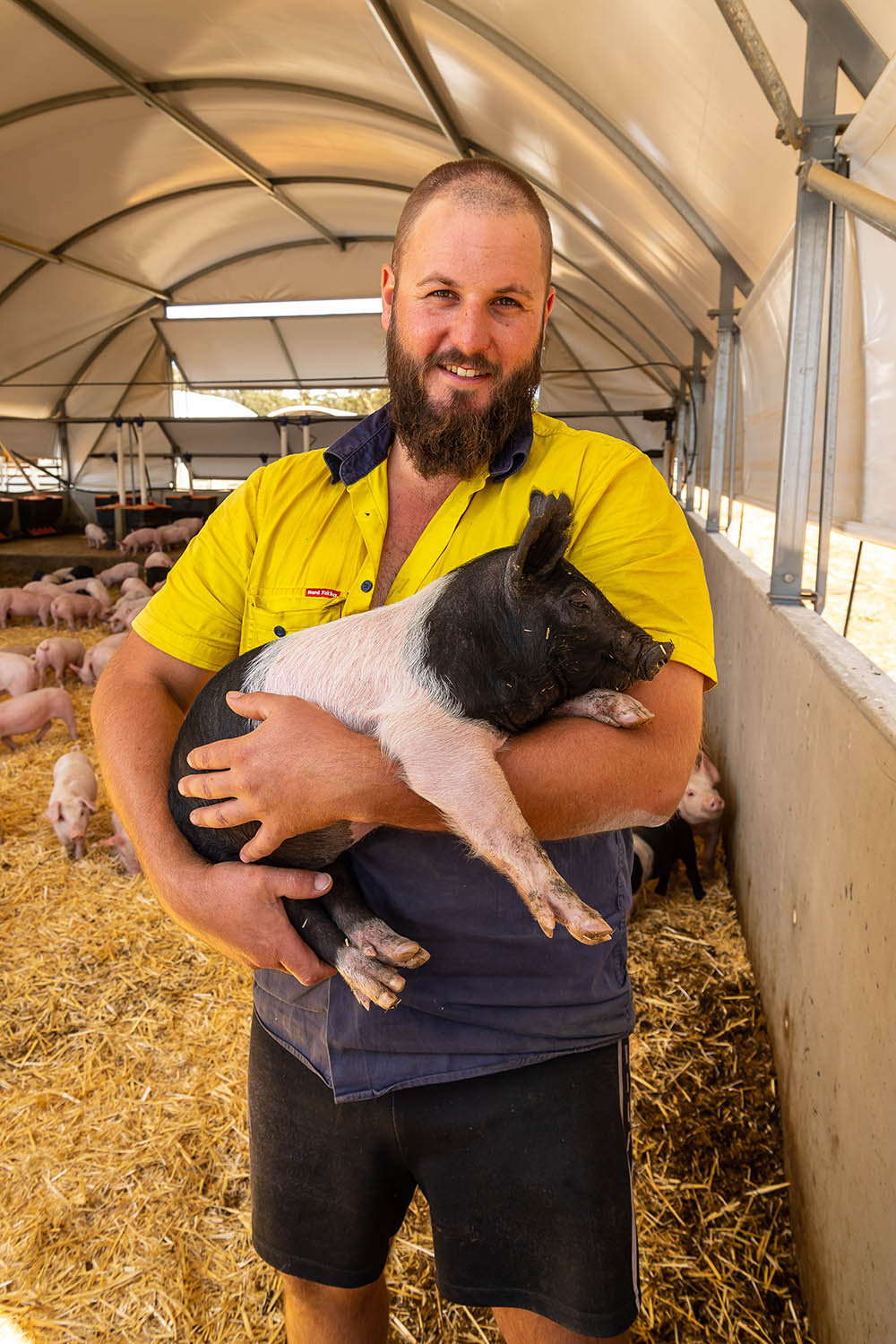 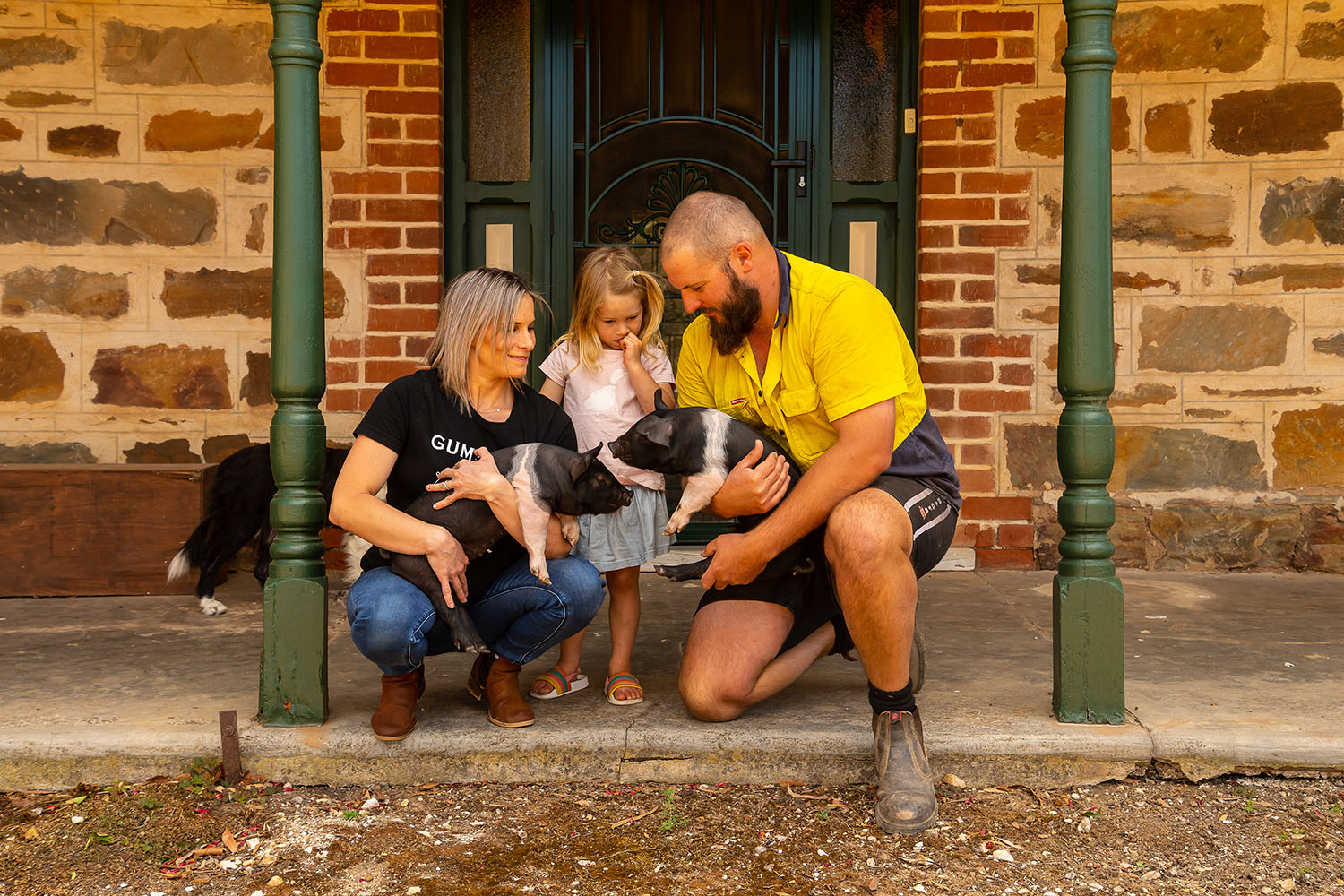 Meanwhile, Shaun was “keeping busy” at home and nurturing his burgeoning entrepreneurial skills.

In his early childhood, he sold eggs “from old boilers” to his primary school teachers for pocket money.

“I wish more kids were like that these days,” he says. “Don’t get me started!”

A school based apprenticeship in Agriculture and pig husbandry was Shaun’s next step.

“I wasn’t enjoying high school. The last year I think I spent more time in the shearing shed than at school!”

It was a sign of things to come and he busied himself  “out bush” travelling to sheep stations, rousting and shearing; working vintages and driving harvesters.

“I’d be happy to live out bush and not see anyone for years. It would not bother me,” he laughs, winking cheekily at Amy.

“I used to do that as a teenager, go work up north marking lambs. There was no phone reception so you’d be away for two weeks and not hear from anyone except the lads you worked with. I love that lifestyle – I hate crowds.”

Yet the huge crowds at the Royal Adelaide Show didn’t seem to deter this country lad’s ambition of winning that elusive championship ribbon.

“The pig section at the Royal Adelaide Show is the highest standard in Australia,” Shaun explains.

“It took a lot of years to get anywhere, but in 2011 we won our first major champion, the Junior Champion Boar All Breeds, basically runner-up Pig of the Show.

“Since then, we’ve won the last five out of six Pigs of Show.”

Although Shaun rarely leaves the farm and says it’s his fault everyone his whole family is busy, he has recently returned to his love of motorbikes and is back on the 24 Hour Trial committee.

“I love the event, we’ve got a very good group and we’re all there to keep it going.”

He and his “mate McGyver” (Nathan Saegenschnitter) placed second in the sidecars once, but Shaun thinks his racing days are over.

“He had some pretty good crashes,” Amy points out with a laugh.

“I only ride nowadays to switch off – the only time I switch off is when I put my helmet on.” 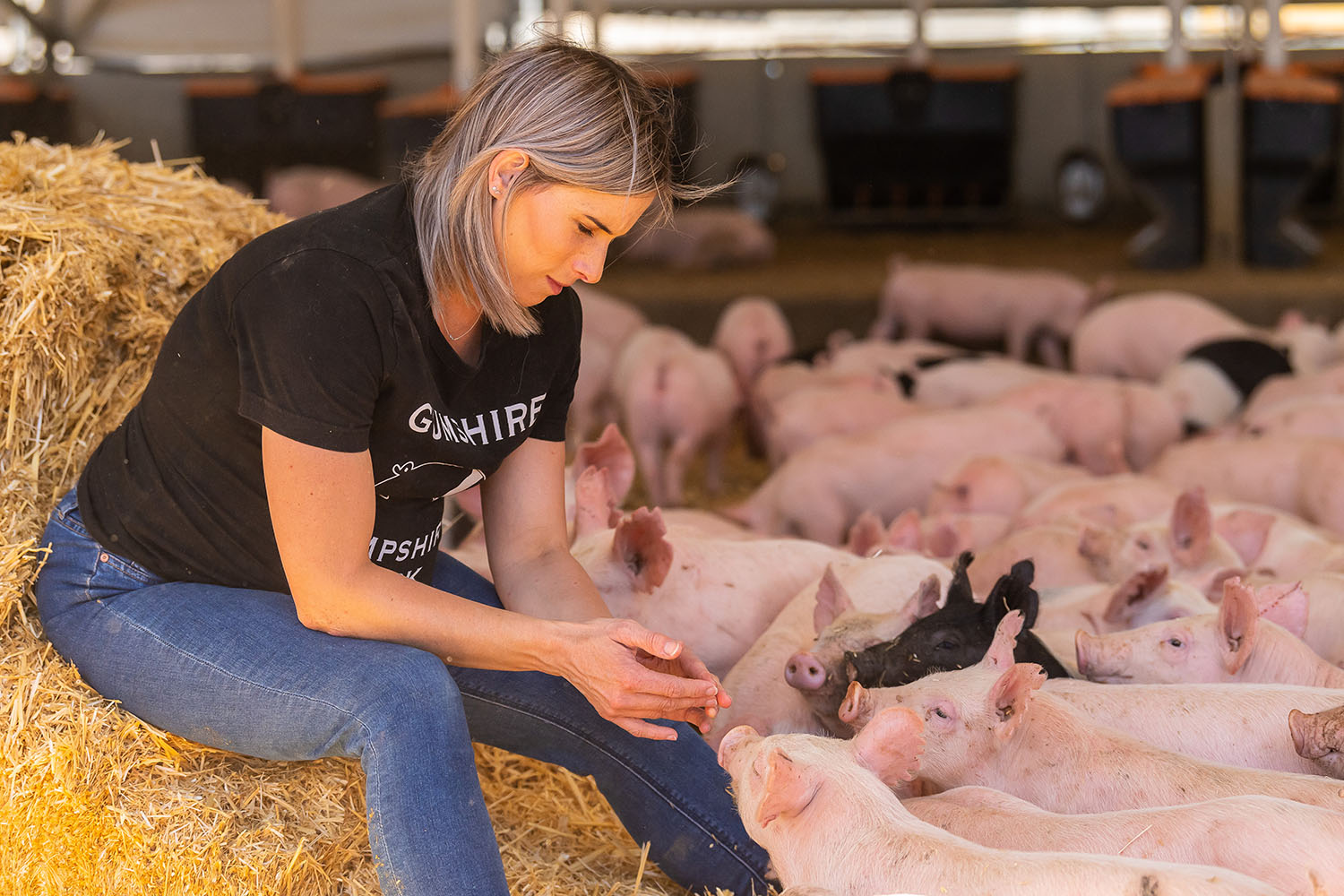 At home it’s all about family and the pigs, which are treated just as well.

“We are at the start of a catchment area, so this is the next best thing to free range,” Shaun says.

“You don’t need to be free range to have happy pigs as far as I’m concerned!”

Every family member plays their part on the 240 acre farm, with Shaun running the piggery and his “Future Pork” business which supplies pure bred porcine genetics around Australia.

Amy runs the market stall with off-sider, Asher; Michael maintains all the farm’s infrastructure and Margaret oversees admin, whilst a number of staff are also employed to help run the show.

“They have to! You don’t know how you are going to fit it all in but you just do,” adds Shaun.

When Asher was born, Amy ended up back in hospital and Shaun was “thrown in the deep end” as a first time father.

“I had Asher at home for a week and a half. Just had the milk run to Gawler and back home!”

Shaun reckons he’s become “a bit of a softy” nowadays and laughs as he likens the role of parenting to raising piglets.

Having proven they can pull together in adversity, the tight knit family have had more than their fair share of hurdles to clear.

“Especially when mum had her thing last year, I had to take everything on…She had a tumour cut out of her head,” Shaun says.

“It was very frightening for everyone… But how I look at it is that we are luckier than others, it could have been entirely different.”

“He’s not a fan of pigs, but he likes coming out here seeing what we are doing. He’ll tell you it’s his farm.”

Whilst nature always throws challenges that  “you’ve just got to whip beat and deal with,” there is one frustration Shaun says shouldn’t be an issue for farmers and he’s fighting for change.

“The toughest thing I see is promoting people to buy Australian ham and bacon,” Shaun says.

“That’s what really effects our industry …there’s no need to bring all that crap in from overseas! Every supermarket sells it!”

And as the recently appointed president of the SA/WA Pig Breeder’s Association, Shaun is making his industry’s voice heard whilst ensuring Gumshire is doing their bit for the cause.

“All of our grain comes from here through to Point Pass basically – we’ve got great relationships with all our producers,” he says.

“Just buy local! Our livelihoods depend on it.” 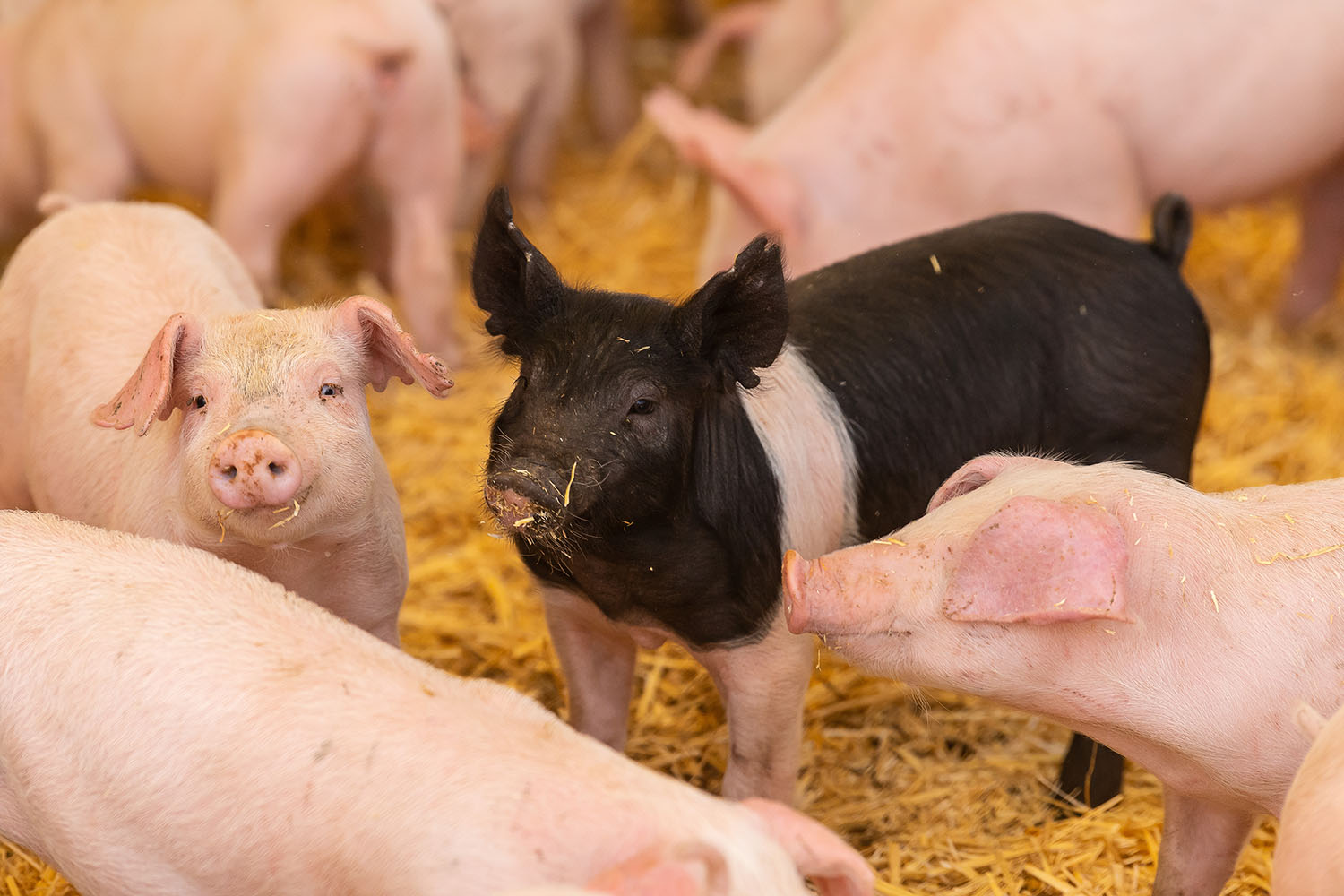