Injecting new life
into the past

It’s often found that, in the car modifying world, the best results come from the hands of those most passionate about their work.

You only need to step one foot into the workshop of David Scholz to understand his level of passion.

Beside the spray booth, inside a perfectly organised workshop, I immediately recognise three iconic cars from the Australian Motoring industry mounted in rotisseries.

The first, being an HT Monaro test-fitted with a late model LS3 Chev engine and running Wilwood brakes.

A 1978 Kingswood that is being prepped for paint, and being left completely original.

The third car is a Torana Hatchback which arrived as the rustiest car David and his team had ever restored.

After taking the body back to a near assembly line state of dismantling, the car would now be one of the most rust free Torana bodies in the country. 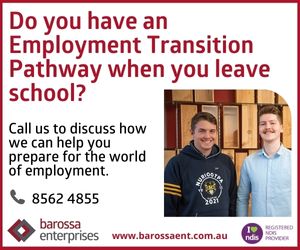 “I’m probably a bit embarrassed to say but, I never did the trade, I’ve just always enjoyed the challenge of building and making things.”

It was astounding to learn that David is completely self-taught!

“I’m probably a bit embarrassed to say but, I never did the trade,” David admits.

“It probably started with Lego then building go karts on the farm before moving on to building and modifying my own cars.”

As a young lad, David began dabbling with his own car, an XD Falcon which he turned into a show car and drag car.

After that, a couple of mates wanted their cars done, and then even the local publican, which helped to establish his reputation.

David began working in a converted chicken shed at the family farm back in late 80’s, until he became so busy that he was able to give away his day-job and properly establish a restoration business in 1990, DJ’s Sandblasting & Restorations.

Four years later, he married his wife, Natalie and they purchased the current property where he was able to set himself up.

Whilst restorations have always been the fundamental part of the business, David introduced crash repair, because there was none in the area at the time.

“In 2000 I decided to set myself up to do sandblasting which is a fundamental part of restoration.

“I purchased a 620 cubic-foot air compressor which is ample for a multitude of blasting jobs.” 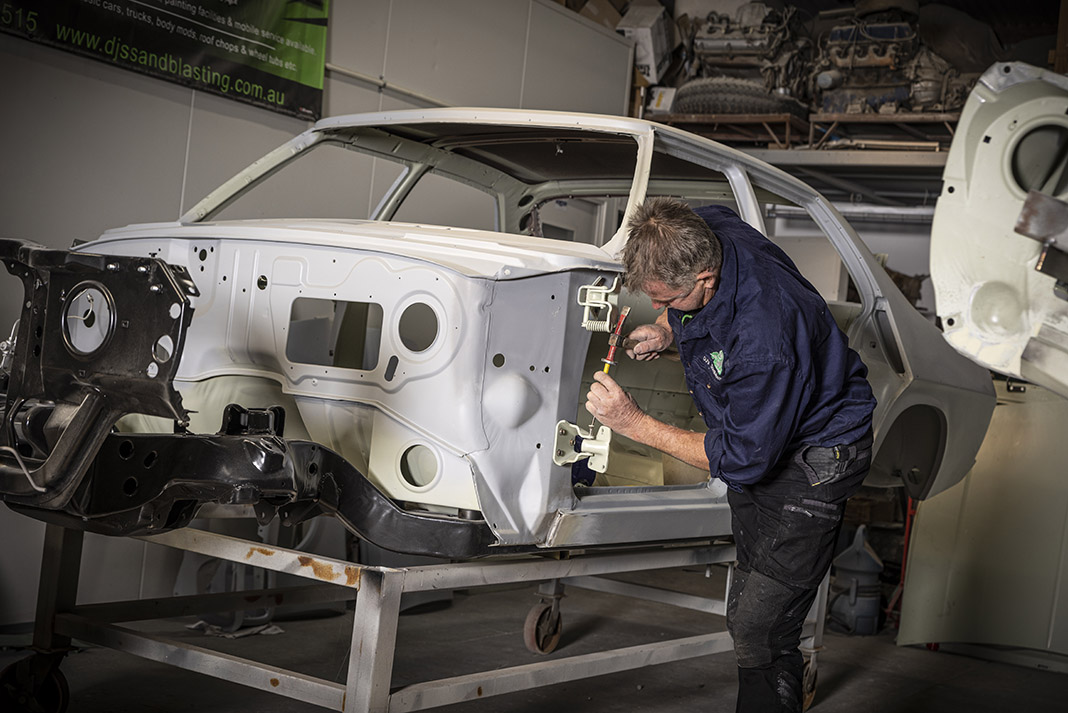 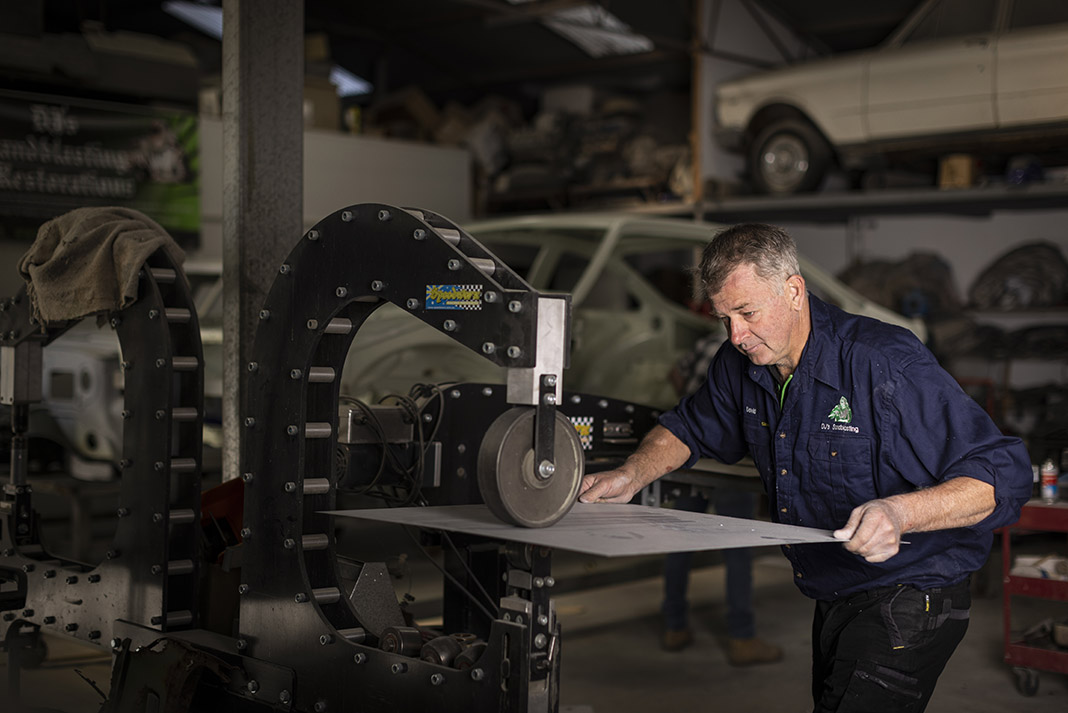 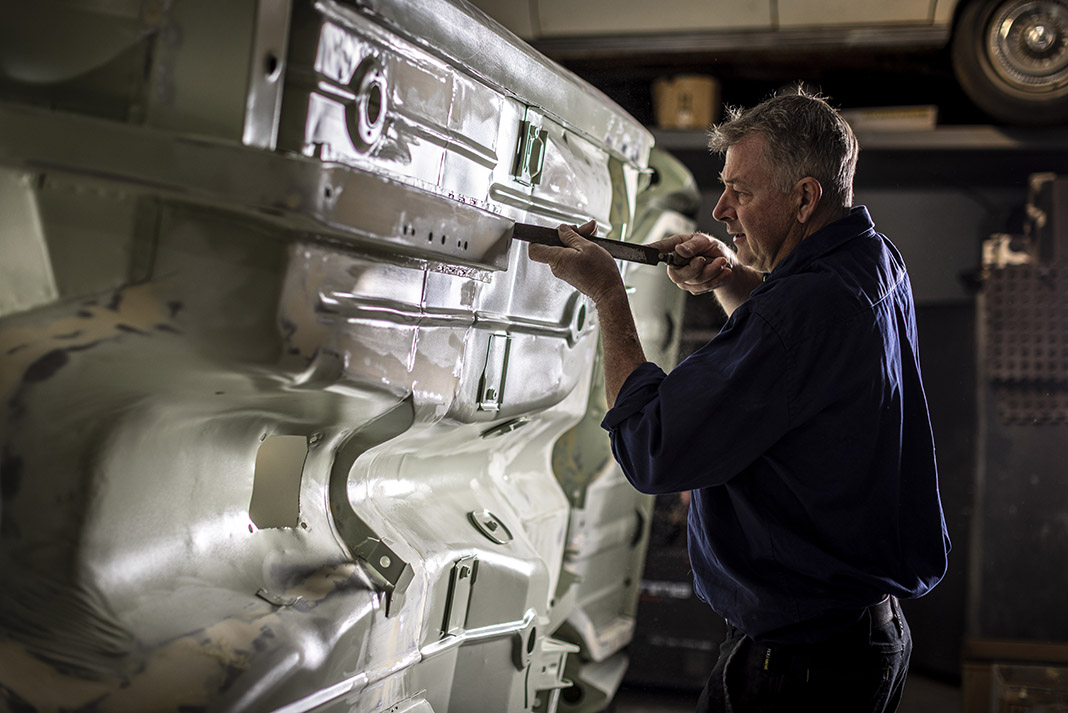 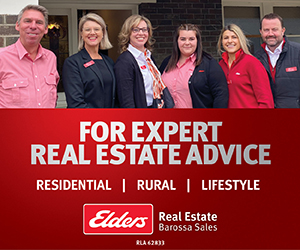 Word spread and sandblasting quickly became a full-time business in its own.

However, it didn’t take long before the blasting, restorations and crash repair became too much for one man and David chose to give away the crash repair side to concentrate on restoration and blasting only.

David employed his first full-time employee, Wade Whitehead as a panel beater about 6 years ago.

David’s son, Sheldon, came into the business as an apprentice spray painter 3 years ago.

“I’m very fortunate to have a very dedicated team that share the passion of providing quality work to our customers.”

There is a particularly beautifully restored and modified 1966 Ford Falcon in David’s shed, that is a perfect example of his workmanship and dedication.

For 19 years, he spent 60-80 hours during his two-week Christmas break working alone on this Falcon.

“It was generally the only time where I could get time to work on my own project.”

When it was finally completed, the engineer said that the car pushed the boundaries of vehicle modification in SA but passed all tests and followed all requirements.

It was one of the most heavily modified cars to be registered in SA without being classed as an individually constructed vehicle.

He took it to the 2017 Adelaide Extreme Auto Expo car show to enter it as an elite streetcar because it’s fully registered, used and driven.

Judges however, deemed it an elite show car because of its painted body colour and detailing underneath.

This meant that the car was to be judged against the full-on purpose-built show cars.

It won a couple of categories and became one of the 24 hand-picked show cars to be invited by Meguiars to go to the 2018 Motor Expo in Melbourne.

“It was an amazing experience to be parked in the Superstars Elite hall beside million-dollar cars. 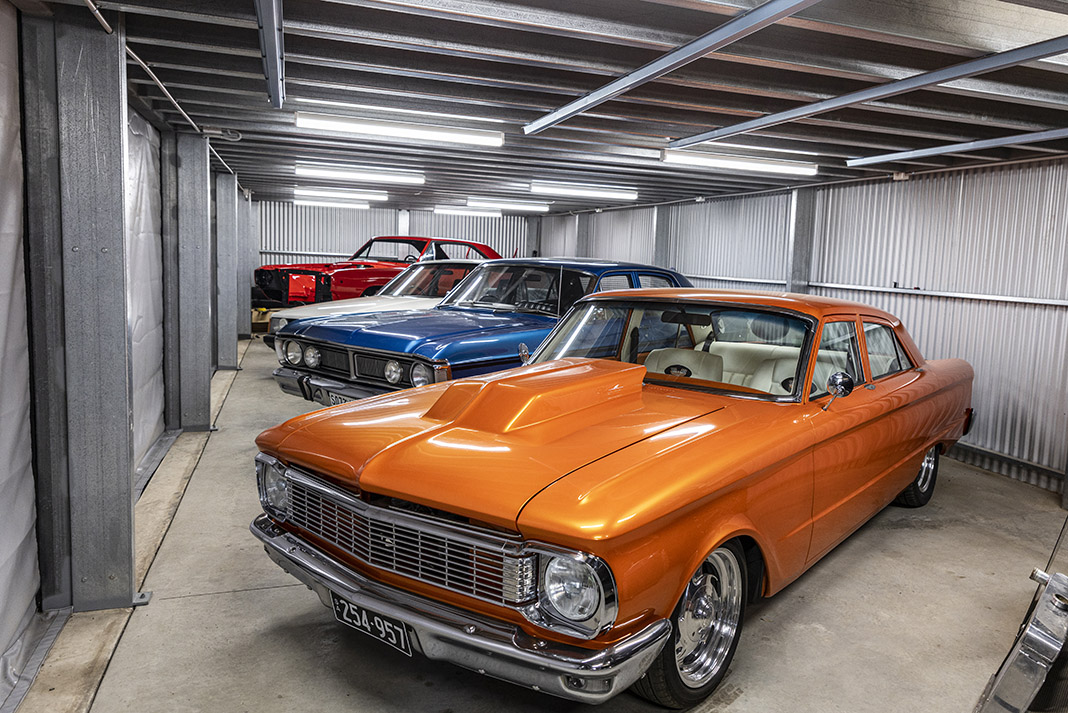 Working on personal projects during the Christmas break was not a one-time occurrence.

David has made numerous contraptions which now decorate his yard, and every piece has a story.

“No normal person would do that on their time off,” David chuckles. “I just love it.”

David is also a collector of many other items from local history, including fuel pumps, antique bottles and jars, enamel signs, all of which is brilliantly displayed in his man cave around an XP falcon ute, chopped down into an impressive bar.

There is no doubt, David remains that same, passionate young lad who began working on that XD Falcon all those years ago and is rightfully proud of all his achievements. 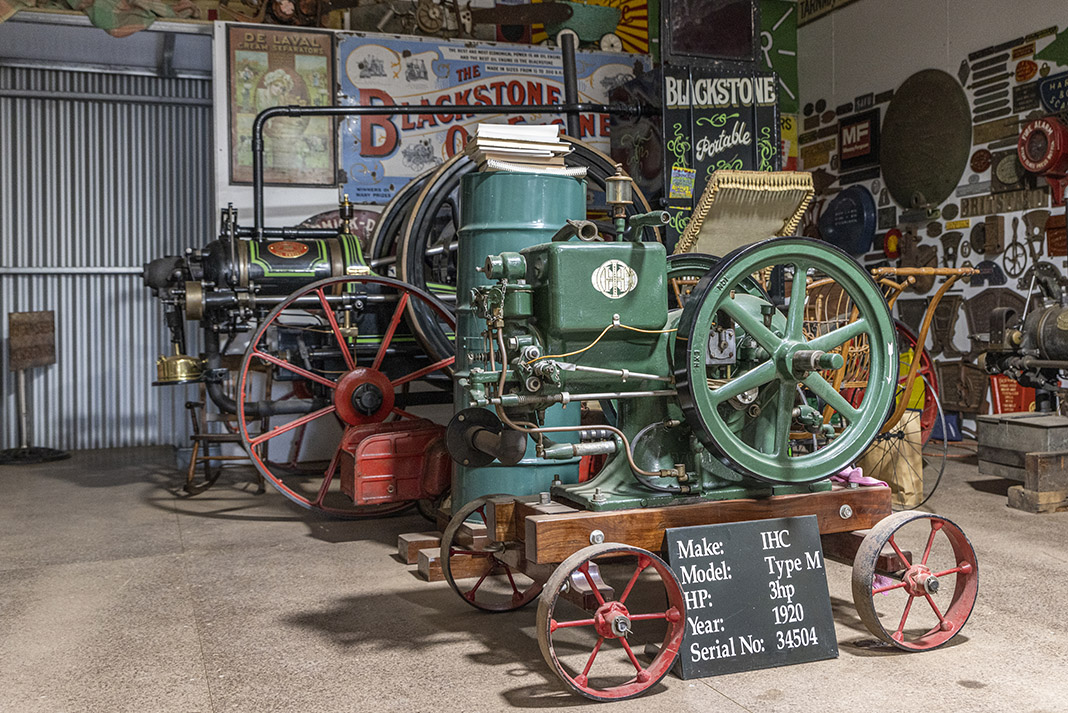 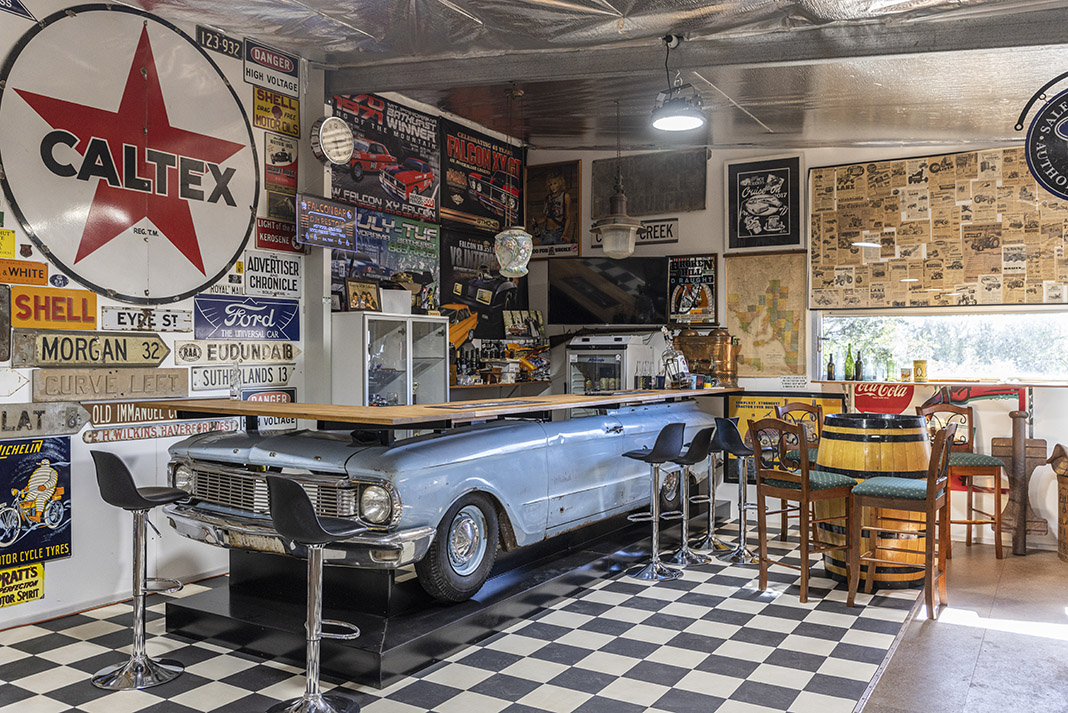 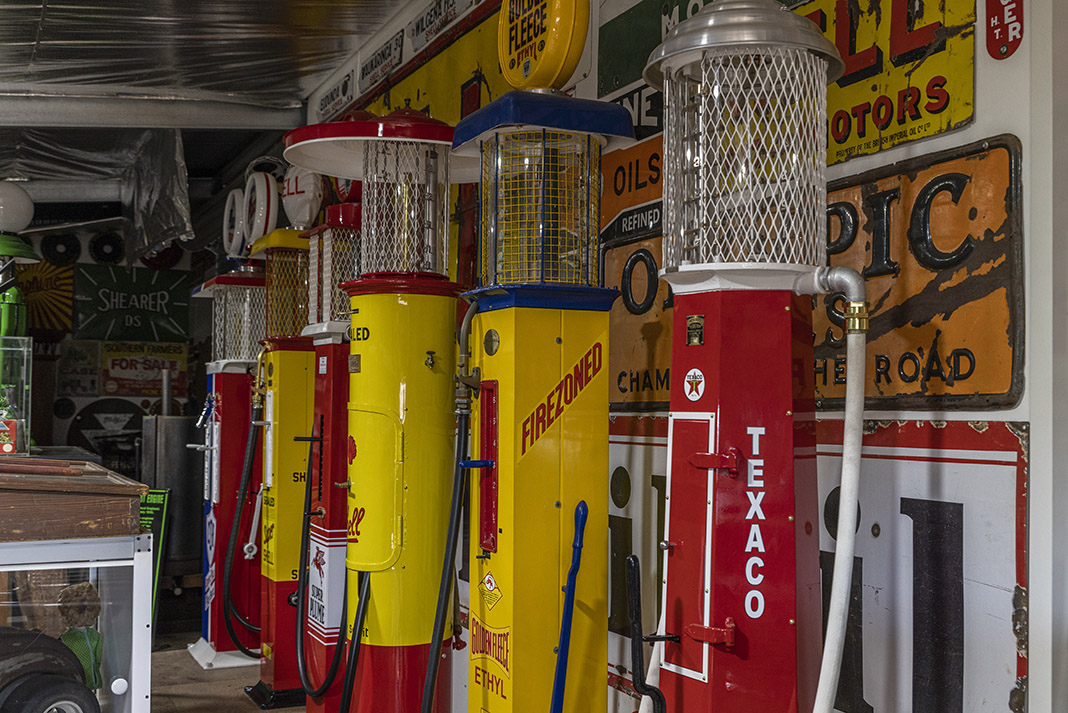