At 16 Melissa Whyte nearly died in a car crash. Twenty-four years on, she’s facing a different fight for life, but her unshakable faith that God will carry her through remains stronger than ever.

On a chilly August morning, Melissa Whyte (neé Hickson) emerges like a bedazzling butterfly at the first urge of spring, shoulders draped in a jacket of red sequins.

“I thought I’d jazz things up a little,” the 40 year old says with a smile, as she eases into a chair in the light-filled living room of the Nuriootpa home she shares with husband of four years, Brian and dog, Violetta.

Opposite her, a cabinet full of African elephant figurines, Melissa’s favourite animal, keeps easy company next to an old German piano, exposed keys and sheet music fanned open in readiness for its next tune.

Trinkets, hand written cards, pot plants and photographs jostle for attention across multiple surfaces of the room, as brightly eclectic as Melissa herself.

Standing out is something she’s embraced all her life; like the mixed media artwork she loves to create, she’s a delightful fusion of grace, fearlessness, colourful creativity, and seemingly boundless positivity that leaves a lasting impression on anyone she meets.

Today her blonde hair is cropped close to her head, and while she briefly worries the deep scar that rings her scalp—legacy of a 1998 car crash that left her with permanent disability—may be too visible, she later reflects on the triumphs of those who bare such palpable evidence of trauma.

“People with scars and animals with scars, they’ve been through things and they’ve survived,” she says.

Melissa is indeed a woman who has been through things, and with all the curveballs she’s been lobbed throughout her life, one wonders how she has the grit to keep on smiling.

“It’s just trust in God,” she says simply, as if that is the only answer that could ever be.

“The way I saw the giraffe having a higher view was what I can see God having on us. You can’t just think woe is me, you’ve just got to have a higher view on what the problem is...”

It was Melissa’s faith that galvanised her 24 years ago following the crash which caused a left-sided subdural haematoma and a stroke, robbing the then-carefree Mount McKenzie teen, eldest daughter of Ron and Cathy, of a “normal” life.

Her brain injury was severe and lasting: she walks with a swinging limp, she has little use of her right arm, and is partially blind.

She can never drive, and must rely on carers for daily tasks others take for granted.

Yet, Melissa thrives, surrounding herself with treasured family and friends.

“I’ve never been depressed in all my rehabilitation,” she says.

“I just thought God is going to pull me through. It takes some frustrated moments… but you’ve got to realise you need to come back and live each day as it comes.”

Born with an adventurous spirit which injury has been unable to suppress, Melissa has skydived five times, once, famously, into her Faith Lutheran College Year 12 formal in 1999.

She’s twice travelled to Africa to share her Christian testimony, and is a writer, poet, artist, pianist and singer in her church band.

One of her poems was selected for publication on an international Reader’s Digest CD in 2000.

“I eat giraffes because I want to extend my view,” Melissa recites the poem’s provocative opening line from a well-worn journal, one of two cherished poetry books she has filled with inspired verse over several decades.

“The way I saw the giraffe having a higher view was what I can see God having on us. You can’t just think woe is me, you’ve just got to have a higher view on what the problem is and how we can be helped by God to overcome it.”

The sentiment is as relevant for Melissa now as it was as a teenager, with fresh adversity intruding on her adult life.

Her joy earlier this year in learning she and Brian had overcome odds and would fulfil their dream to become parents was followed by the heartbreak of miscarriage eight weeks into her pregnancy.

“It’s a thing that lots of women have to go through, and maybe the baby wasn’t perfect,” Melissa says, looking out over the vineyards at the rear of her property towards the Barossa hills; a point of view she has captured in one of the many artworks that grace her walls.

“But we called it Alex, and that has really helped us with the grieving of it, because we think, Alex, you’re up there in heaven waiting for us and we can’t wait to see you.”

A few months after miscarrying, Melissa received yet more devastating news: an aggressive cancer had been found in her left breast.

“The” cancer, as Melissa refers to it.

“I’m not claiming it as mine,” she insists.

It is the brave reason behind her stylishly short haircut, which she and younger sister, Cheryl Goddard recently did together in aid of cancer research.

“I have had some tearful days and thought, why has this happened?” reflects Melissa, who will begin chemotherapy in the coming days.

“But I can never ask why. We’ve just got to come together in prayer and believe in God that I’ll get through this.” 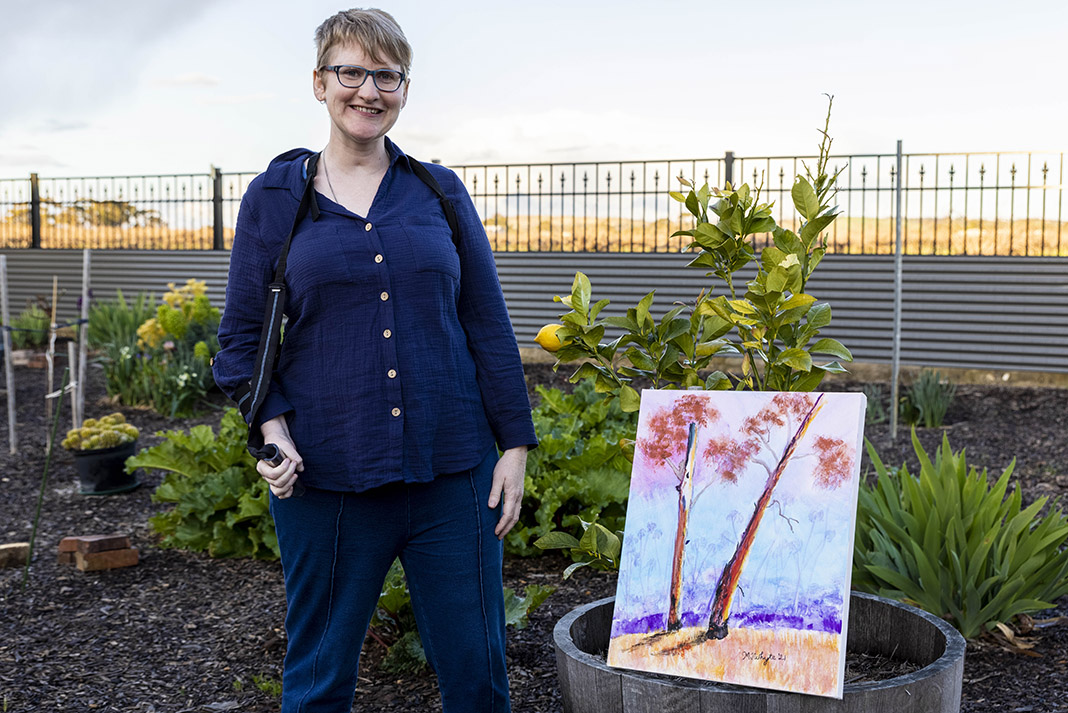 Never asking why is true to Melissa’s life philosophy, and part of the title of her recently self-published autobiography,  ‘Blessings Every Day, Never Ask Why; Never Give Up’.

Recording her remarkable journey over the past quarter of a century has been Melissa’s way of turning her experiences into words for others to lean on.

It’s a story of hope and faith; a handbook  for all the giraffe-worthy moments in life.

“There’s challenges that come to everyone’s lives and anyone who reads my book will be uplifted, they’ll be encouraged, and they can see that there is worth to see things from another perspective,” Melissa says.

“Look up to the horizon, don’t look down and get depressed.

“That’s the whole message of my life.”