Home The People Conversations with Colin; The Barossa Vintage Festival past to present 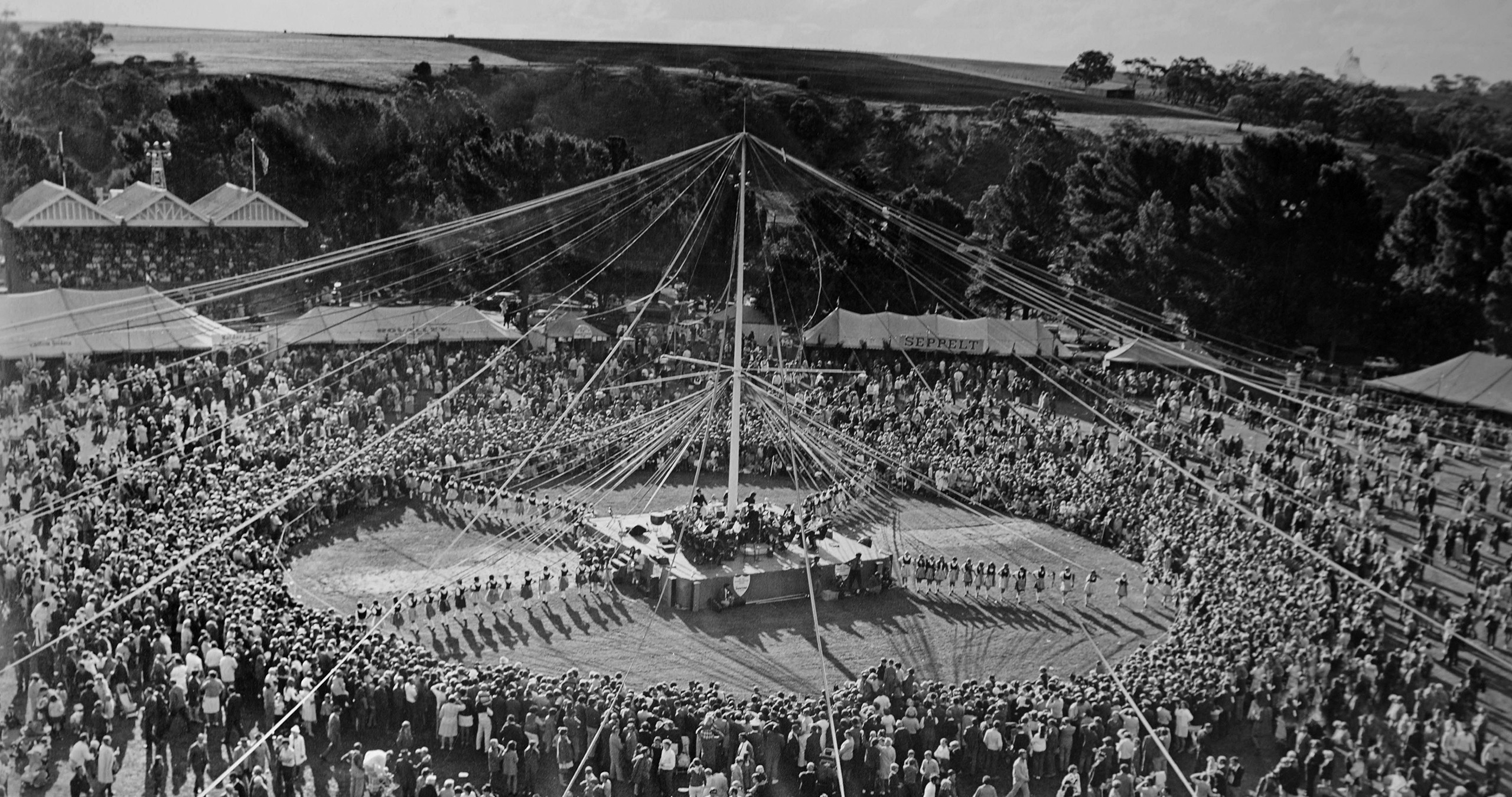 The Barossa Vintage Festival past to present

The year is 1947. It’s a big year for a young Mr Colin Gramp who was celebrating his first year of marriage to wife Josie, the Centenary year of Gramp’s of Orlando as well as starting the first of 50 years’ service on the Wine Show committee for the Royal Adelaide Agriculture and Horticulture Society of SA.

It was also the year the young winemaker met up with the late Bill Seppelt and Martin Dallwitz at Nuriootpa’s Angas Park Hotel, attending the first planning session of what would become the Barossa Valley Vintage Festival.

Seventy years later, Colin is proud to say he was on the founding committee for one of the most cherished and longest running wine festivals in Australia.

“I can’t believe it’s been 70 years!” exclaims the 95 year old as he sits in the lounge room of his Tanunda home,  a manilla folder filled with agendas, minutes and event programmes sitting on his knee.

Flicking through original documents, now yellowing with age, he finds the notes for an address he gave to the Rotary Club of Adelaide back in 1973.

“My memory isn’t too good anymore!” he laughs as he begins to read the very words he spoke during that April evening at the Hotel Australia in the city.

“One hundred years after the first vines were commercially planted, the Barossa Valley townspeople decided to celebrate the first Vintage Festival in keeping with the long standing traditions of their forebears, the majority of whom came from Germany, so as to express the happy and contented spirit of the early settlers perpetuated through the generations that have followed,” he says authoritatively.

“It has been influenced by songs and music..folk songs handed down from the early settlers and the formation of choirs, bands and orchestras.”

He points out two happy faces in the group shown standing on a yellow wagon which decorated the stage.

“There’s a one year married couple in the middle! Josie was 25 and I would have been 26…we all had a great time.

“The biggest disappointment was we couldn’t get a liquor license so there was only grape juice. You know the driveway on the side of the hall? That’s where we had winemaking equipment actually pumping juice and a press case pressing grapes,” he says laughing at the memory.

“Because it was so well attended, it formed the nucleus – it’s where it all began.”

The following year, and reflecting successful wine festivals in Europe, a float procession and Queen Competition were introduced.

Colin describes the crowd of 16,000 people who converged in the Valley for that 1948 event, all eager to join the “festive spirit” and watch Miss Joan Hoffmann being crowned the first Vintage Festival Queen.

“We were still picking grapes because we were still making fortified wines in those early days. It was a bit hard going!”

From 1947 to 1954 the festivals were planned to be held annually but an unexpected world event quashed their endeavours.

“In 1952 when Princess Elizabeth, our present Queen, and her husband Prince Philip were to have honoured us with their presence, the Festival had to be cancelled at the last minute due to the untimely death of the then King George VI,” he explains.

“She was about to fly from South Africa to here. I remember, I think it was a week before…. The Vintage Festival didn’t go ahead out of respect.”

Lack of enthusiasm meant there were no festivals from 1955 to 1957 and when the committee reformed to plan the 1958 event, they decided it would be held every four years.

“There were several of us who were interested and we kept going and we said to ourselves, gee, we can’t let this slip. We want to get it going again.”

Colin was appointed as the second Vintage Festival president, from 1961 to 1967, during the 25 years he served on the committee. He followed the late Mr Bert Scholz who presided from ’47 to ’58.

Experience gained from the Royal Adelaide Show led Colin to develop a similar organisational structure which promoted inclusiveness between all the towns and villages in the Valley.

“There were town committees and representatives on the board, it really worked well…They represented different areas and wineries – a wide cross section.”

In 1965, it was decided that the Vintage Festival would  alternate with the Adelaide Festival of Arts and since then it has continued as a biennial event.

Many “different ideas of entertainment” were introduced, from fancy dress balls and dancing in the street at Nuriootpa, to industry displays, grape picking competitions, car races, rodeos and medieval tournaments.

Art exhibitions, dinners and a wine auction were launched along with a Barossa Wine Fair carnival.

Colin has fond memories of the first Weingarten evenings held at the Tanunda Show Hall.

“I will never forget when we had Evan Kleemann –  he had the whole of Tanunda rolling around with laughter.. gee it was a good night!”

Asked what his Festival highlights were, there is a thoughtful pause as he tries to narrow down what is obviously an extensive list.

“We were very parochial in those days and I think the highlight was that we brought all the towns together and worked for the Barossa,” explains Colin.”

“A lot of hours went into the Float Parade…the floats were floats, they were beautifully done.

“Again, it encouraged the people in the villages and the towns to get together, select a Queen and then put together a lovely float for her.

“I know Lyndoch, that one year, had a beautiful, huge Grecian urn, in sort of bronze and gold. It was all done with papier mache, but it looked so real!”

“The whole Barossa was at the Tanunda Oval!” he says as though it happened yesterday.

“On the Saturday morning, you had the Parade from Nuri to Tanunda and then when that was over the people flocked to Tanunda Oval for the Maypole and the crowning of the Vintage Festival Queen.

“In those days, there were only 27 wineries and we all had a marquee around  the perimeter. They served food with the help of charitable organisations supplying the workforce…and wine of course!

“It was basically all voluntary but when we made a good profit, we divided it up amongst the charitable organisations that provided the workforce.”

But for Colin, a touch royal glamour was the ultimate draw card.

“I still feel that the crowning of the Queen was the highlight…I can remember standing up on a platform with this huge vine leaf as a backdrop and the actual crowning taking place.

“We had a wine barrel…Imagine a cask, we cut a portion out and then put a seat in there and upholstered the back – that was the throne!

“I was standing nearby and looking out over the crowd…You had that wonderful feeling of what a success the Vintage Festival is.”

The success of past Vintage Festivals was a result of “everyone working as a team for the betterment of the Barossa Valley” says Colin, a philosophy he worries is beginning to wane.

“That’s what I fear…there are so many wineries now, we must not allow a percentage to go out of their way and really reap the benefits for their own good – It should be for the Barossa Valley.

“Barossans working together for the Barossa – that’s the very heart of the Vintage Festival.” 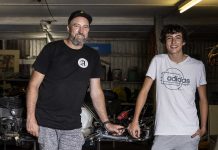 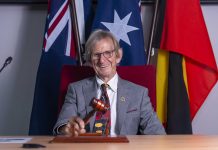 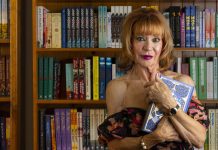 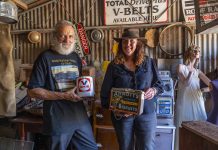 For the love of all things rustic 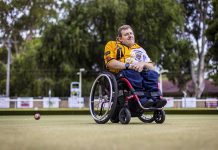 Loyal to the game