Home The People Generations in cricket 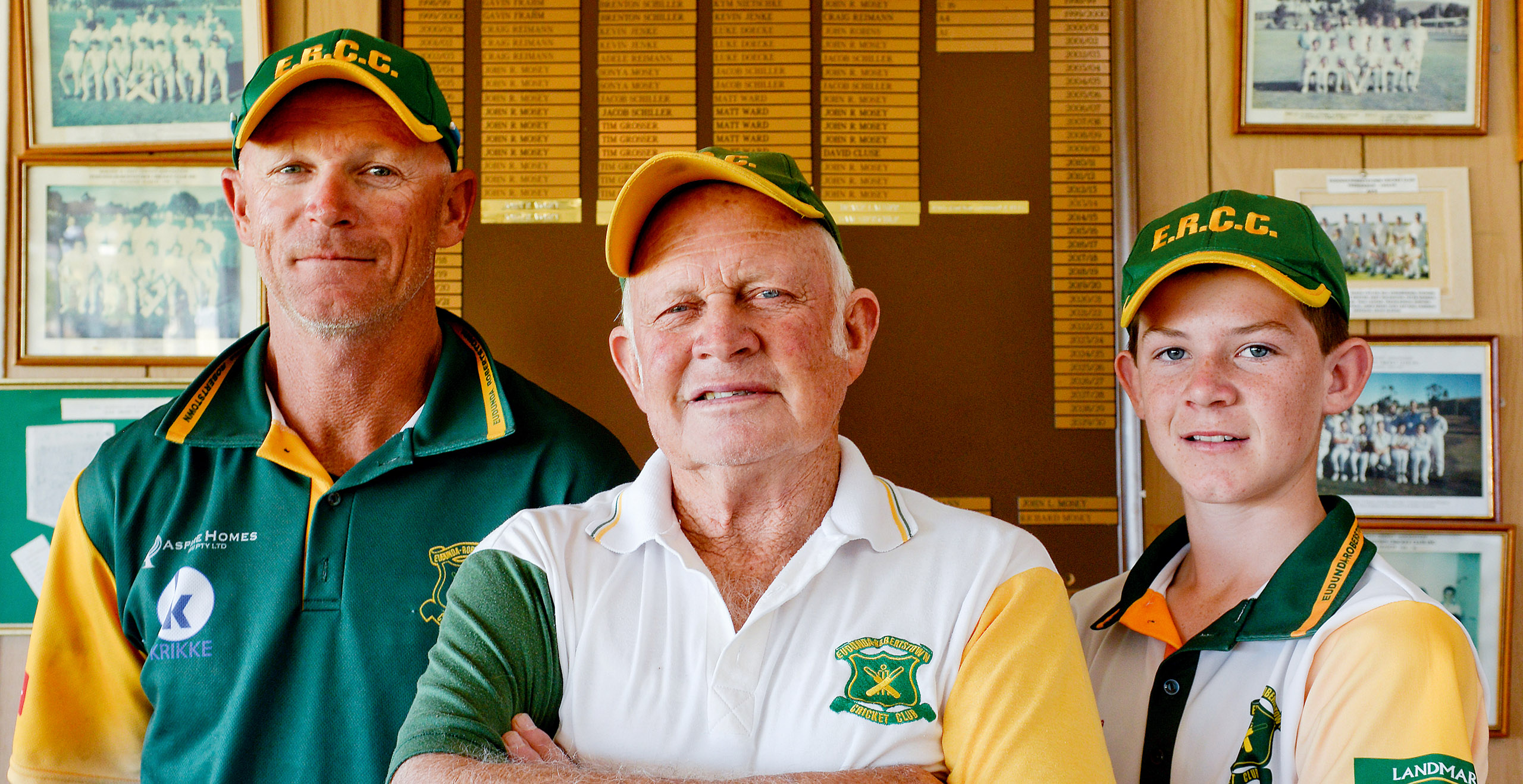 The crack of willow against leather in the heat of summer is music to the ears of the Mosey family.

But that’s nothing new, in fact it’s been that way for probably six generations now, ever since the first “John Mosey” immigrated to Robertstown from Yorkshire, England – the heartland of cricket.

“It’s in the blood,” 75 year old John L. Mosey says, reflecting on his own stellar cricketing career which spanned half a century – a pretty good innings in itself and just under his career batting average of 55 runs.

The Robertstown grazier has been dubbed the “Bradman of the Bush” by sport’s writers, but this stalwart of cricket is not much for that kind of talk, he prefers to let his statistics tell the story. Whilst he is proud of his achievements, John’s not one to embellish or, as he says, “blow his own trumpet”, yet he can be coerced into a cheeky grin when asked how many matches he’s played.

The reality is, John played 1,006 matches and is recognised as the most prolific club run scorer in South Australia. It’s a title, as far as he is aware, that he still holds today and one that had him presented with a framed cricket bat from the South Australian Cricket Association, signed by the great Sir Donald Bradman himself.

Yes, it is a lot of time at the crease and includes inter-association and country carnivals as well as matches with Robertstown and later, Eudunda/Robertstown Cricket Club when they amalgamated back in 1980. But John doesn’t see himself as only a batsman with a mountain of runs.

His stats once again shine a light on a country cricketer that some have described as one of the finest players ‘never’ to have played at elite level.

“I was an all-rounder,” he said, revealing more about his career, bit-by-bit.

He’d know, he has a complete record of every match he ever played, with newspaper clippings filling six books.

An opening batsman and left-arm medium pace bowler, John is one of just 10 South Australians to score a century and take 10 wickets in a single innings. The competitiveness in his veins still runs strong and you quickly learn that John played cricket to win – he’s not one for a social hit.

“Lord no… absolutely not! Winning is why you play sport isn’t it?”

Memories of the day he was given out LBW on 99 still makes him wince ever so slightly.

“It was about ‘that far’ out from leg stump!” he says, indicating the distance.

But he’s not one to hold a grudge, after all, John was an umpire for 10 years.

“He wouldn’t be the first umpire that gave me out when I wasn’t out… when an umpire gives you out, you’re out…you get out of there and let someone else have a go.”

John still has the bat that he used to score his career highest score of 270 runs.

He scored 1980 runs, including 11 centuries, and took 85 wickets that year, topping it off by captaining the team to Premiership victory – one of 11 he captained his side to. “I played 19 Premiership sides altogether,” he lets slip.

“There would have been several years that I won all the trophies: the batting average, batting aggregate, bowling aggregate and bowling average.” And like all cricketers, no Mosey wants to talk about ducks.

A few nerves on match day was nothing to be ashamed of, says John who thrived on the feeling. “I reckon anyone who says they are not, they are either telling a fib or their heart’s not in it. “I’d say, that’s what drove me as a captain, the fear of failure – I didn’t want to lose.”

It was in 2003, the year John turned 63, that he says “cricket gave him up”. Yet it wasn’t the game that stopped, he says he could have “lived with it” if that were the case.

“I broke a leg… I jumped out of a tree,” he says suppressing a smirk. “I didn’t know when to retire….I guess it gave me an excuse not to play again.”

Outstanding player performance, a decade of umpiring, 11 years as president of the Barossa & Light Cricket Association and a stint as its statistician, all led to the Association’s ‘Cricketer of the Year’ being presented with the John L. Mosey Medal.

“The Association gave me the honour of naming it after me,” he says humbly.

John is proud to say the Association has never looked better and whilst individual Clubs have had their ups and downs over the years, the competitiveness has stayed strong and games are “by and large played in the right spirit”.

“Cricket in the Barossa is thriving,” John says. “I noticed this year they’ve got 48 senior teams and countless junior sides. In this day and age, that’s incredible.”

John has witnessed the “Gentleman’s Game” change over the years. “And not necessarily for the better. I think sometimes the way players carry-on on the field is a disgrace. “I was sledged plenty of times myself, but never retaliated.”

Respect for the game is unwavering for John and he has handed the tradition to his sons and grandsons, just like the generations before him. “We’ve got it on both sides,” he says. 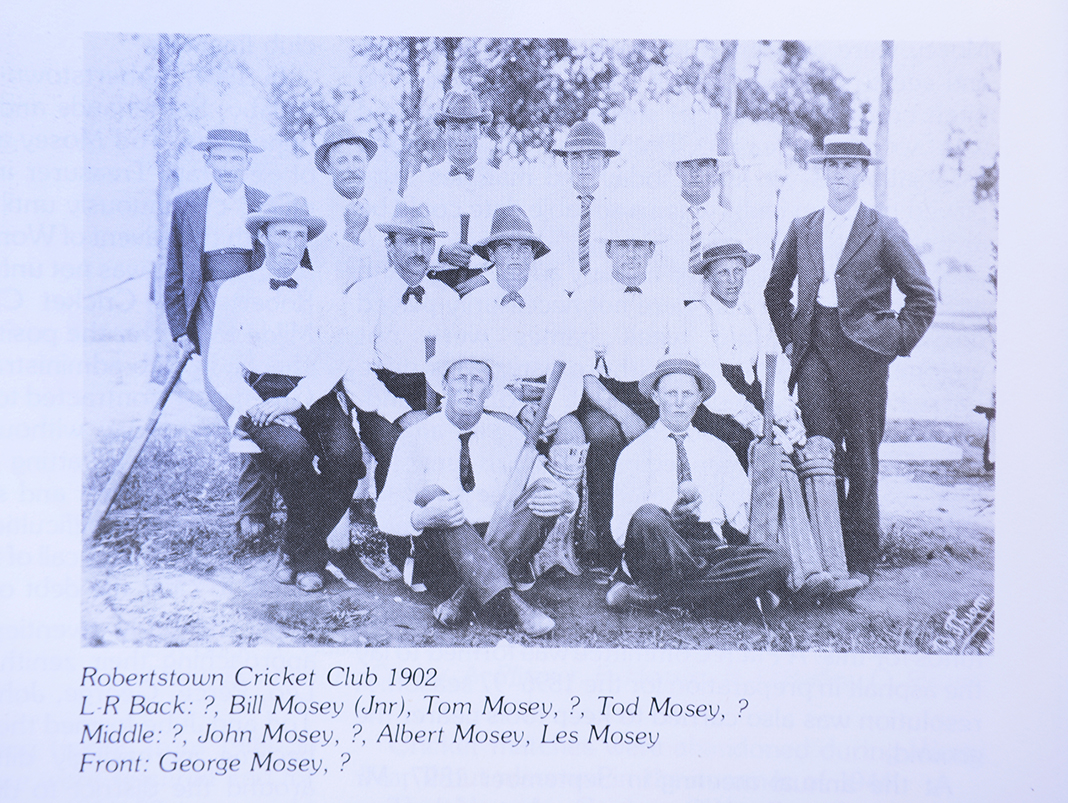 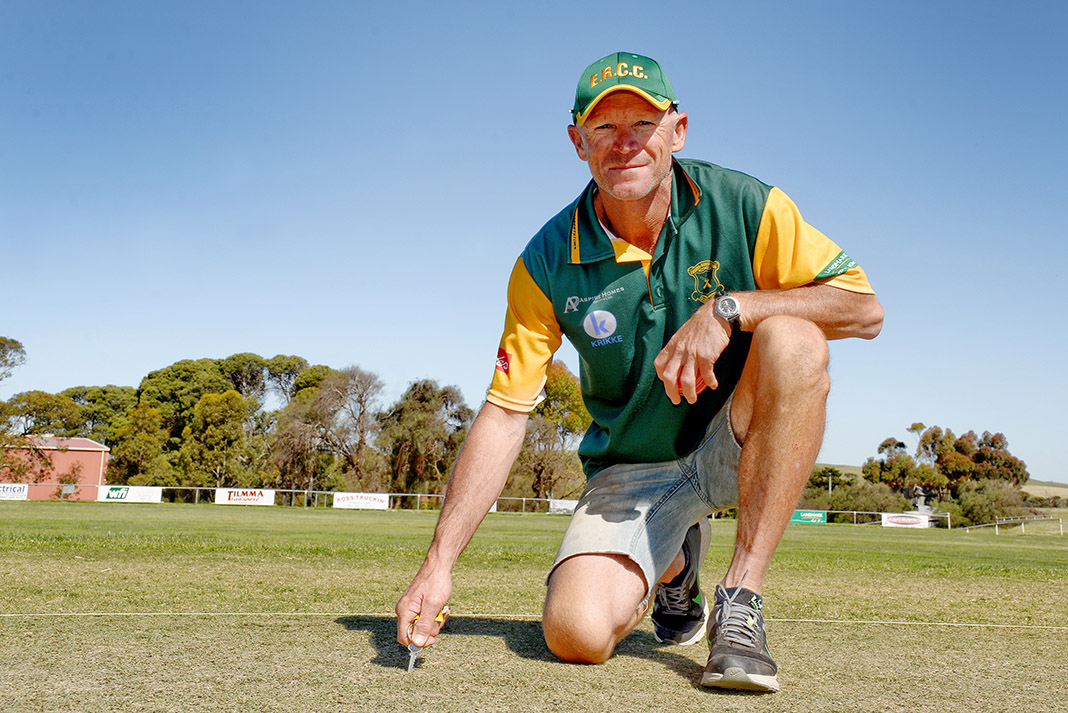 The first Robertstown oval was built on land owned by the original John Mosey and no fewer than 31 Moseys have represented the club at some stage since the town’s cricket club formed back in 1895.

Whilst those Moseys are not all from the same branch and nowadays the original oval plays host to sheep rather than batsmen, senior John Mosey has to smile as he recalls cricket teams of the late sixties and early seventies.

“There were many Moseys,” he says. “I played in a side once that had nine!”

Standing next to his son, John (Johnno) and grandson, John (nicknamed Jack), who both play for Eudunda/Robertstown, it’s not only the Mosey family’s christian name that is continuing strong. Johnno, now 48, still plays cricket, something he’s been doing since he was 8.

President of the Cricket Club, he is also the A1 Reserves team co-captain and, like his father, doesn’t look like stopping anytime soon. “I’m primarily a batter,” he says. “Can’t do too much more apart from that!”

Johnno has inherited his father’s talent and commitment to the game and says cricket was something “you just did” growing up in Robertstown. His top score is 193 and when asked what his most memorable innings was, he’ll casually say it was when he made 35 against Sri Lanka.

“I played for the Outbacks, the SA country team, for about 9 years. I captained them for three years, represented Australian Country three times.” The experience allowed him to play against a number of international teams, including Pakistan and the West Indies.

“I’ve faced Courtney Walsh… Curtley Ambrose was there, but luckily he didn’t play. “A highlight, I suppose, would be representing your country.”

Johnno also went to England “a couple times” in the mid nineties to play league cricket. “Where I played wasn’t far from where our ancestors lived – in Northumberland, last county before Scotland. “They don’t know if they are Scottish or English and you can’t understand what they’re talking about!”

Johnno is often found driving the roller along the cricket pitch at Eudunda oval. He’s been the curator for 15 years now, ever since the turf wicket was installed. He’ll spend “a couple hours” on Sunday morning and “a few” on Thursday keeping his Club’s home ground pristine. “On Friday, it’s rolling and mowing and marking the crease. It’s not real hard once you know what you’re doing.”

Johnno admits to not having enough premierships under his belt. “Probably should have won a lot more.” “Through the nineties we had a good run…finished second about four times!”

Whilst he may have slowed down a little, Johnno’s learned from the best when it comes to longevity and stays in the slips like his father did, agreeing it was the best place to observe the action. “I try and field these days where I don’t have to run too far…. We’ve got a lot of young kids in the team now, so they can do  the running around the boundary.”

Whilst he is “absolutely” competitive, the social side of cricket keeps him coming back for more, week after week. “There’s nothing else to do,” he laughs.

“It’s just something you do and I enjoy it. It’s not always good fun chasing 400 in the field but it always comes to an end at some stage… then you have a few beers afterwards.”

Johnno looks forward to seeing his mates each Summer. “They’re not always your mates on the field, but off the field they are.” 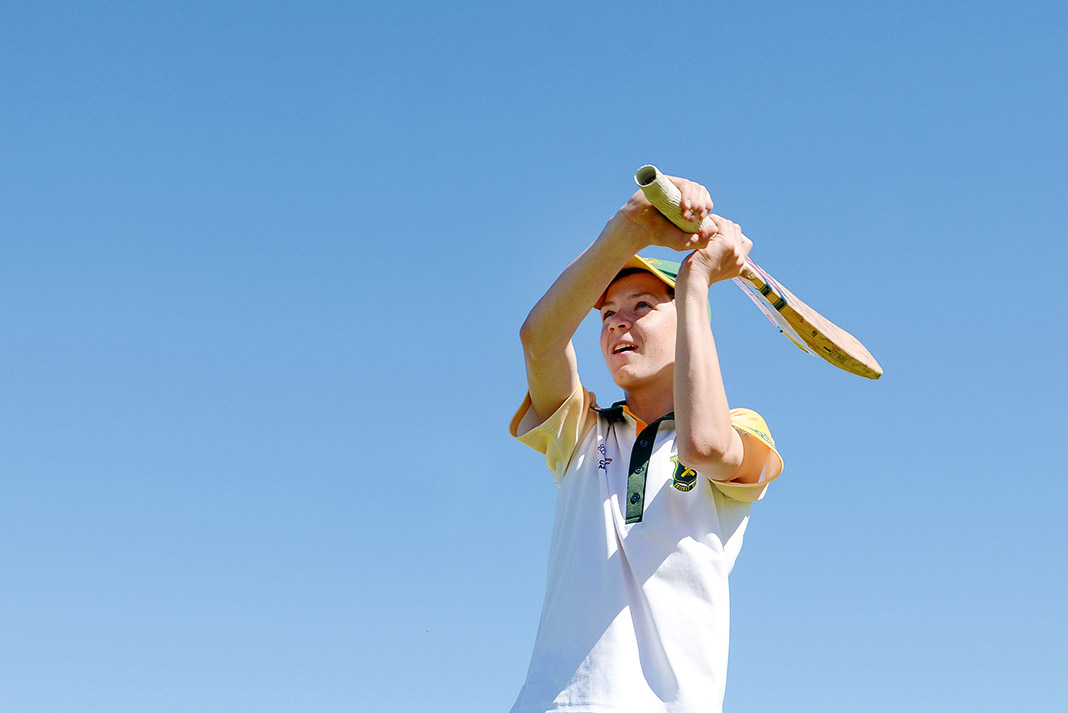 Aiming High – Jack is eager to continue the Mosey tradition.

John “Jack” Mosey is the sixth generation “John” Mosey to don the cricket whites for his town. Aged 14, Jack was given his first cricket bat when he was barely three hours old – a gift, not surprisingly, given by his “Poppa” John L. Mosey.

“Growing up, Dad and Poppa were always pretty good,” he says in the typical laid back Mosey style.

A left handed batsman, but right arm bowler, his grandfather says “he doesn’t know which side of the bat to stand”, but that hasn’t stopped Jack from working his way up through the ranks.

The young Mosey plays in the Eudunda/Robertstown Under 14s team on Saturday mornings and for Northern Districts in the afternoons – a long day for his ever supportive mum, Sonya.

If his name is anything to go by, that number will grow alongside his bowling average, but for the moment, this young gun is working on another cricket skill the Moseys have yet to record in the family history books.

“This year I’ve just turned into a wicket keeper. At a trial game I got asked to keep and the coach thought I was alright so I’ve been working on it at training and keeping on Saturdays.” 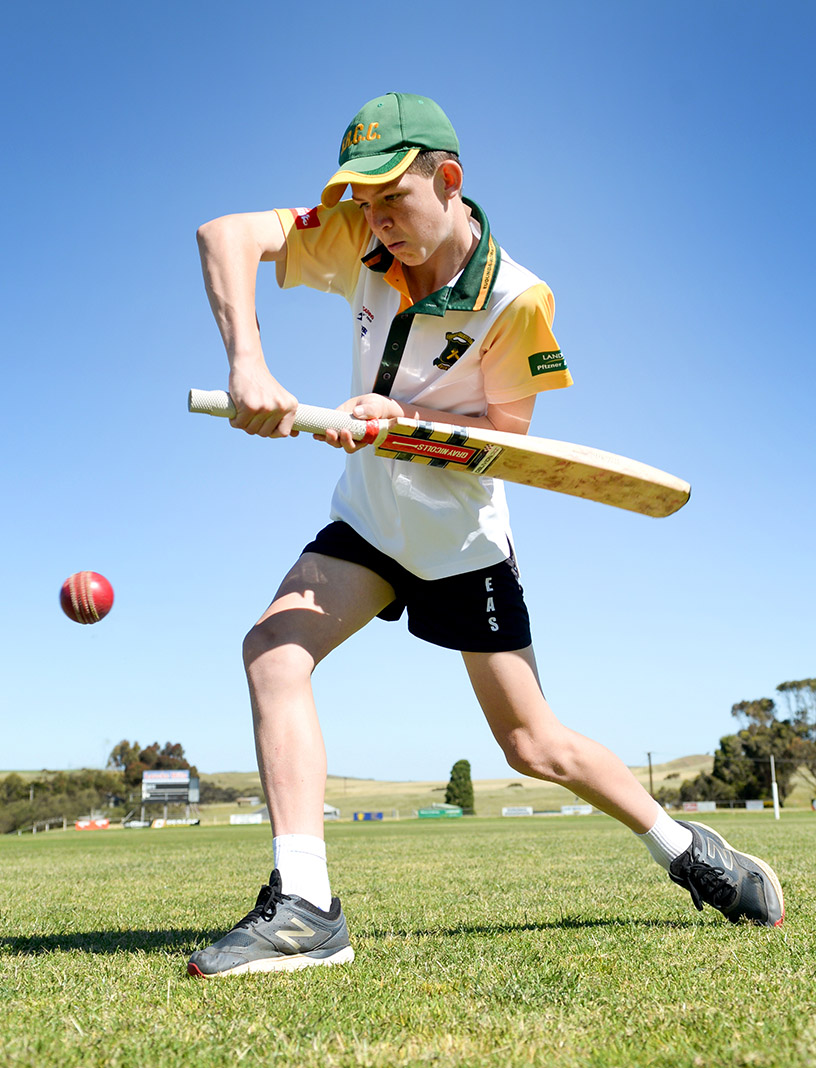