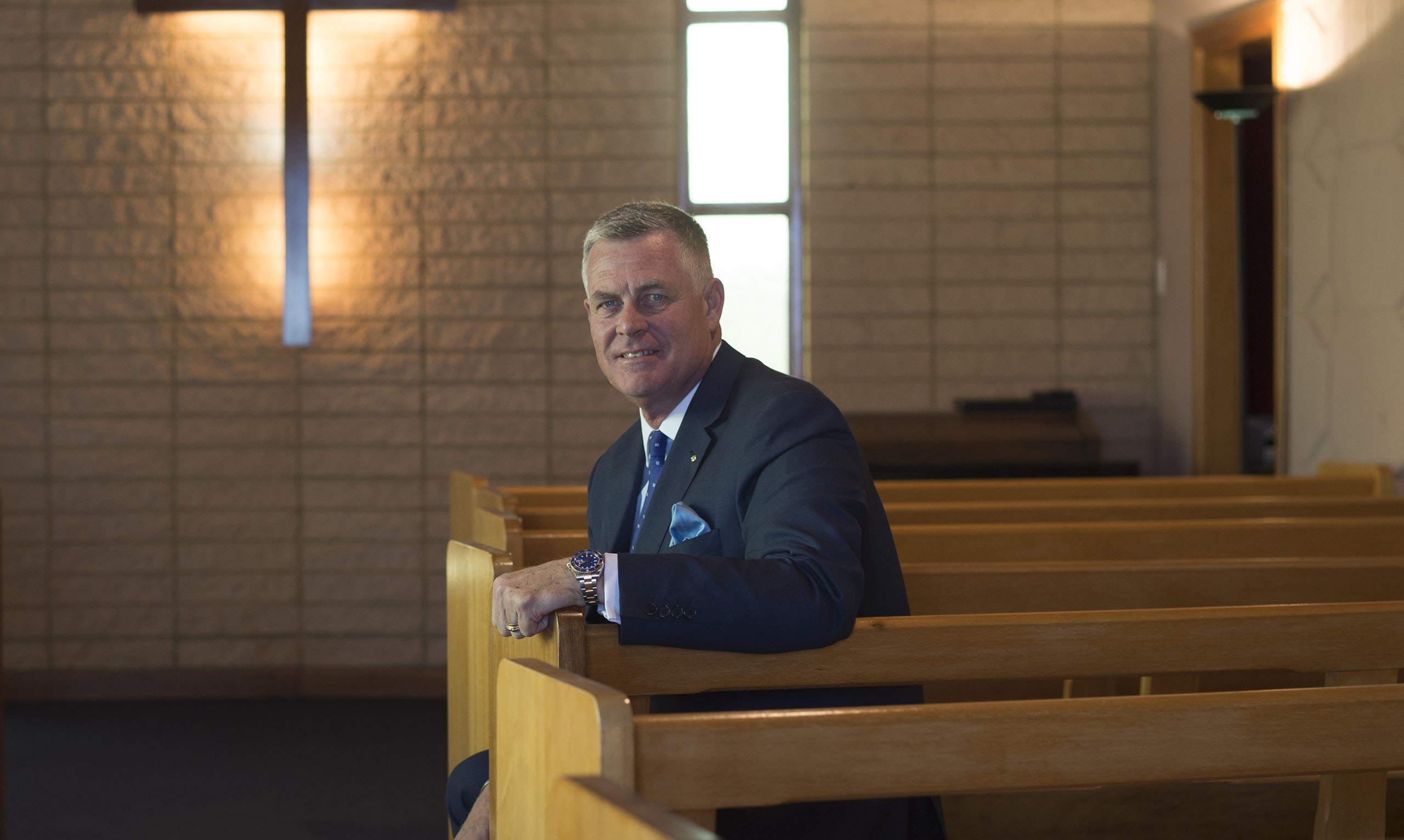 It is said there are only two certainties in life.

Tanunda’s Clayton Scott pays his taxes like any law abiding citizen but as one of only two ‘Master’ Funeral Directors in the state, he is also in the unique position where death is his living.

Walking into the Nuriootpa funeral parlour which bears his name, you are warmly greeted by a tall, snappily dressed figure.

It’s then you realise this is someone people spend most of their lives avoiding as far as professions go.

Yet Clayton has the calming, reassuring presence you would expect from an undertaker, even the rich timbre of his voice suits his role to perfection.

One has to wonder though, why does anyone choose to dedicate his life to such a career where tears and sadness are the norm?

Clayton smiles at the question he knew was coming, it seems there’s an interesting story about to unfold.

“I grew up in a hotel environment, the Kent Town Hotel,” he says.

“That was my life growing up. Day starts, go to school and you come home and go upstairs so you are not in the pub environment.”

Clayton describes an idyllic childhood at “the top of Rundle Street”.

Back in those days, hotel hours were “six o’clock open and eight o’clock close” and Clayton’s grandmother, whom he affectionately called “Narnie”, played an important role in he and his brother’s upbringing.

“My grandmother was our carer…she lived at the hotel too. Then she got ill and was taken to hospital and she never came out,” recalls Clayton.

“I never saw her again. She was gone.”

As a 10 year old, Clayton barely understood the concept of dying and his “children should not be seen” upbringing in the hotel also rang true for Narnie’s funeral, so he was not allowed to attend.

“That didn’t dwell very well with me… Why couldn’t we go? What happens?

“I was very inquisitive and that’s when the interest started.”

If you didn’t know this child’s future, one could consider what followed to be an unusual pastime for someone of Clayton’s tender years.

Curiosity taught him back pages of newspapers were filled with funeral notices and because he lived so close to West Terrace Cemetery, why couldn’t he hop on his bicycle and learn more?

“I watched funerals at churches…I could watch from my bike and see what was going on.  Then at West Terrace Cemetery, I’d look to see if there was a burial happening.”

What Clayton discovered was a celebration of life facilitated by a team of caring people who provided one last opportunity to say goodbye – he didn’t have that with Narnie.

“That’s when I decided that’s what I wanted to do,” Clayton says.

“That was the calling. I could see that I could do what they were doing. It was my background, in my nature.” 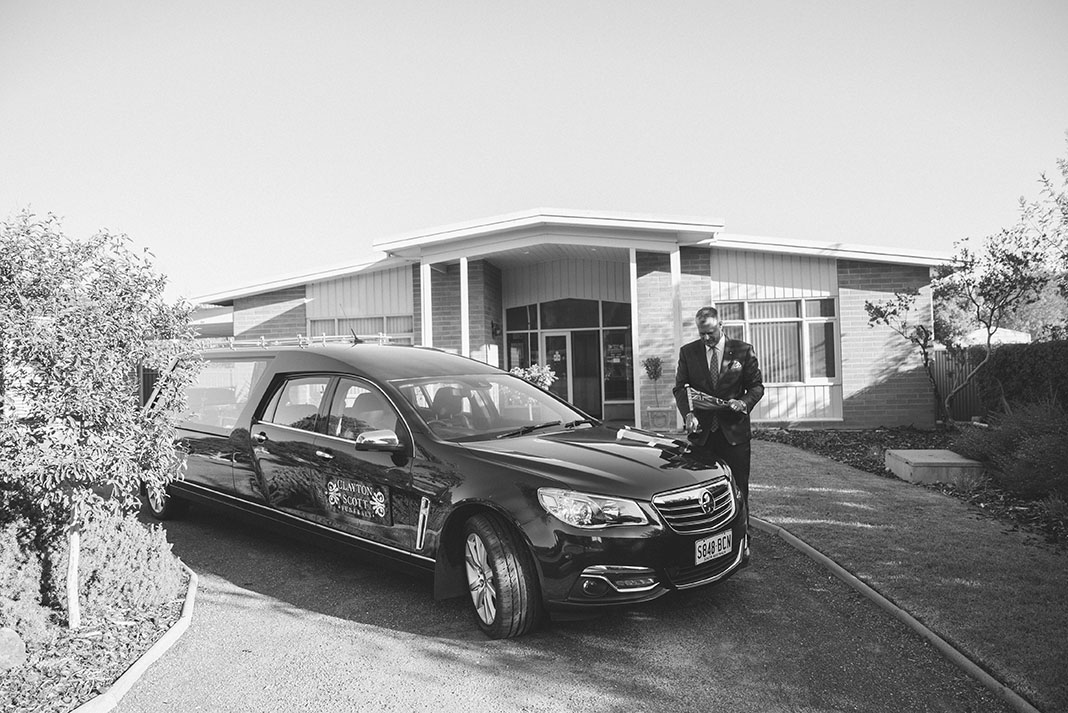 The journey continued for Clayton as he sought more information on a topic children were supposed to be blissfully ignorant of.

“I had to find out how you get a career in this industry and there is not a lot of information at all.

“So then I started to go and visit funeral parlours.”

Clayton has to laugh, he knows how odd his story must sound – don’t most ten year old boys want to be firefighters?

He speaks of funeral directors “humouring” him and telling him to come back when he’s older and the plot in the backyard where wooden clothes pegs marked the site of any  “dearly departed” insects he found.

“A caterpillar, butterfly… whatever I found dead in the backyard, I didn’t care. It got buried!

“And because I lived in a pub, there were lots of matchboxes and I would collect them… I had my own little register, where I would record everything. I knew it was all in the newspaper so I had to record everything I was doing.

“I just wanted to give them respect, that’s it.”

Clayton was 13 years old when, whilst with his father on a business trip to Kapunda, he met funeral director, Kon Pfitzner.

He could never have imagined that years later he would own Pfitzner Funerals because at the time, he was just doing his regular school holiday “research”.

“I didn’t go to playgrounds… I went looking for cemeteries and funeral parlours!” he laughs.

“I went around the front, no one there. I see there is a back entrance so I walk around the block and there was Mr Pfitzner with a hearse… So, I introduced myself.

“He was very receiving; he didn’t shoo me away. He thought oh well, it’s a career and not many people want to do it.

“That’s the first time I saw somebody. He showed me someone in a coffin and said this is what is going to happen and that was that.”

“He actually got what I needed to pursue what I wanted to do.”

Work experience with Daryl Blackwell at FW Blackwell, led Clayton to being offered a position as a funeral director’s assistant.

Forty years on, Clayton can say he has reached the pinnacle of his industry after being mentored by some of the best and gaining qualifications in all fields of Mortuary Science.

Along the way, he met his wife, Debbie “in a bus”; they moved to Tanunda following the acquisition of Colin Liebich Funerals and raised two children, Caitlin and Lachlan.

Meanwhile, Clayton served at the highest level as President of Australian Funeral Director’s Association, during which time he helped facilitate national guidelines with Prime Minister John Howard to be used in the event of pandemic flu and terrorism attacks.

He shares his leadership expertise by filling many volunteer roles, from chairman of local radio station, Triple B FM to President of the Nuriootpa Football Club.

“I’ve been chairman of all sorts of things…I get asked, I help. It’s what I do.”

Clayton continues to lend his voice to emcee events, drawing on skills learned during evenings treading the boards with the musical society, “back in the day”.

Whilst outwardly, Clayton exudes an aura of complete control, he has an emotional side few will ever see.

Clayton admits to shedding a tear at funerals and has seen more than his fair share of heartbreak, especially in his coronial work.

There is one thing Clayton feels the public often don’t grasp.

“If someone dies and it is a coronial matter where the police are investigating a death or a doctor doesn’t want to issue a death certificate…people don’t understand we represent the coroner, not a funeral director.

“The rules are ‘no dialogue’… it is a different aspect of death care. But, you hear people talking, saying this or that and they just have no idea.”

Remaining confidential is part of the job and strictly legislated, a ruling that can cause heavy burden.

“What annoys me is we don’t get any debriefing or counselling. Others say we’ve been to a debrief yet we never get invited,” Clayton says.

He plans to fight for change and if his past is any indication, it will happen.

“Psychologically, our work is stressful and traumatic sometimes. You can’t show emotion because we’ve got to lead the way.”

And lead the way he does, whether it is quietly advocating for a reduction in speed limit for notoriously dangerous intersections, or educating young drivers by introducing “mock accidents” to high schools in an effort to curb the road toll. Clayton will step up.

Clayton is “honoured and privileged” to serve families and is proud of the path he has chosen.

He and Debbie have struck a good work-life balance and it seems Clayton’s dry sense of humour also helps as he tells of the day when Adelaide crematorium staff went on strike, leaving the gardeners running the show – “awkward!”

This month, Clayton is preparing to emcee a brass band night in the Tanunda Show Hall and says entertainment is a coping mechanism. He’ll likely be dressed in a loud jacket – the complete opposite to his sombre work suit.

“I switch off from funerals, put myself in another world… otherwise you would lose your mind!,” he laughs.

“And I hate fishing!”