Sixth generation grapegrower, Christine Canute says she’ll never forget the day she tasted the ’97 Grenache and ’96 Shiraz made from the fruit growing just outside their Vine Vale home.

“I just went wow, this can blow any wine out the water!” she recalls with the same sense of joy she felt the moment the Canute family realised they could make Rusden Wines both a reality and a success.

“After 20 years of being told by the big wineries that your grapes were ‘sub-standard’, then to have someone make wines like this – you’re standing there, drinking your own product and it’s absolutely amazing – that really convinced us to go for it.”

The daughter of Dennis Hage, now 98 years of age, and the late Linda, Chris is the third of seven children raised on a small vineyard in Bethany and despite her father and grandfather and two siblings being vignerons, she was certain she wouldn’t follow suit because teaching was her destiny.

“I left home saying I would never go back on a vineyard again… I married a teacher outside of the Barossa – so new blood!” Chris says of her husband, also named Dennis.

Dennis laughs, adding, “I’m a Copper Triangle boy, born in Moonta and raised in Kadina. I didn’t know what wine was until I met my father-in-law!”

Having travelled with their teaching career, the couple decided to settle in the Barossa and find a “hobby farm”. The old Kraft family homestead at Vine Vale captured their attention.

“The house was virtually on the way to being derelict and the property was a wreck but we could buy these 60 acres for less than a one or two acre block with a flash house on it,” says Chris.

“This is where Dad came in with his advice and wisdom. He had a vineyard at Vine Vale and said that the property could grow great grapes. Any rate, we decided to purchase it. Dennis was teaching at Faith and I came back on the property to grow grapes… it gave me the freedom to raise our three children, Christian, Hayley and Katrina, here on the property and I loved it.” 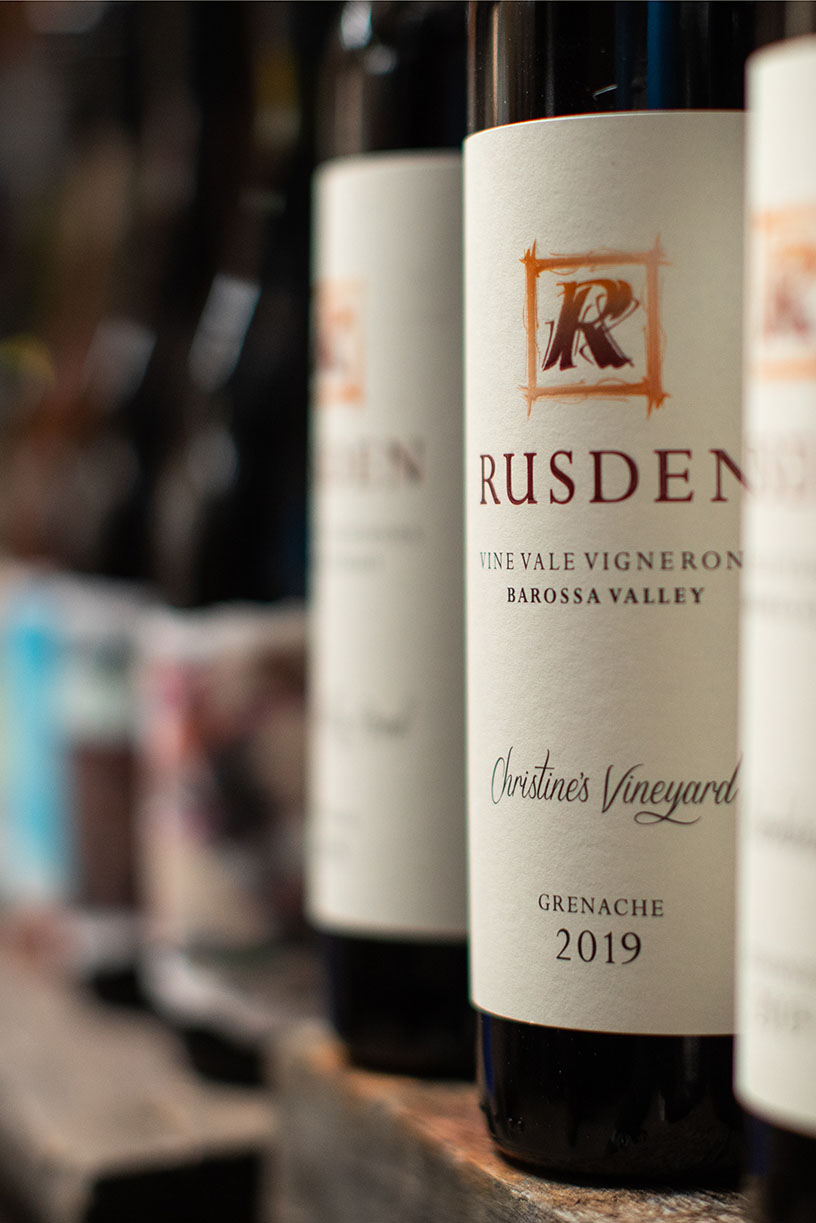 With her early viticulture experience, advice from family and some borrowed equipment, Chris slowly transformed the vineyard whilst the old house was eventually brought back to life.

“Someone said to me, welcome to the land of sun, sand and sore eyes!” she says, describing the property’s “2 to 15 feet deep” sand and strong gully winds that blew dunes under the windows and over the driveway, blocking their way to Magnolia Road.

Yet after spreading clay from holes dug on the property and other soil management techniques, the dust began to settle.

Unsustainable grape varieties were replaced with those more popular and Chris heeded her father’s advice and kept the original old Shiraz vines which she nurtured to become the vineyard’s most precious asset.

Knowing the importance of education, Chris joined the Barossa Grapegrower’s Association and other committees to further her knowledge.

“I was secretary of the Farmers’ Federation for ages, then on the board of BGWA and I’m very proud to have been involved with the setup of the BIL scheme. I knew the value of water because this property didn’t have any bore or functional dam.”

But it was Dennis who decided it was time to branch out and make wine.

“My friend, Russell Gehling, a fellow teacher at Faith, and I decided to make a barrel each vintage and we made our first batch in 1992,” Dennis explains.

The first three letters of each of their names were combined to read “Rusden” and a logo was designed by Faith art student, Amy who had no idea fate would lead her to meeting and marrying Christian Canute, Dennis and Chris’ winemaking son, years down the track.

Dennis tells how, in 1997, when Christian was doing his apprenticeship at Rockford Wines with the likes of Rob O’Callaghan, David Powell and Chris Ringland, he had come home with a request.

“He asked, can I have a half a tonne of grapes? I would like to make some Grenache – that really was the start,” says Dennis of the seventh generation to enter the fold.

Christian adds, “Dad made Cabernet and Shiraz that year and I made Grenache!”

Those were the wines his mum had tried that night, the ones American wine advocate, Robert Parker would later rave about, resulting in the old fax machine running hot with orders.

“If you follow your passion, find something you love and work hard at it, research it and get to know it - it will take you places.” 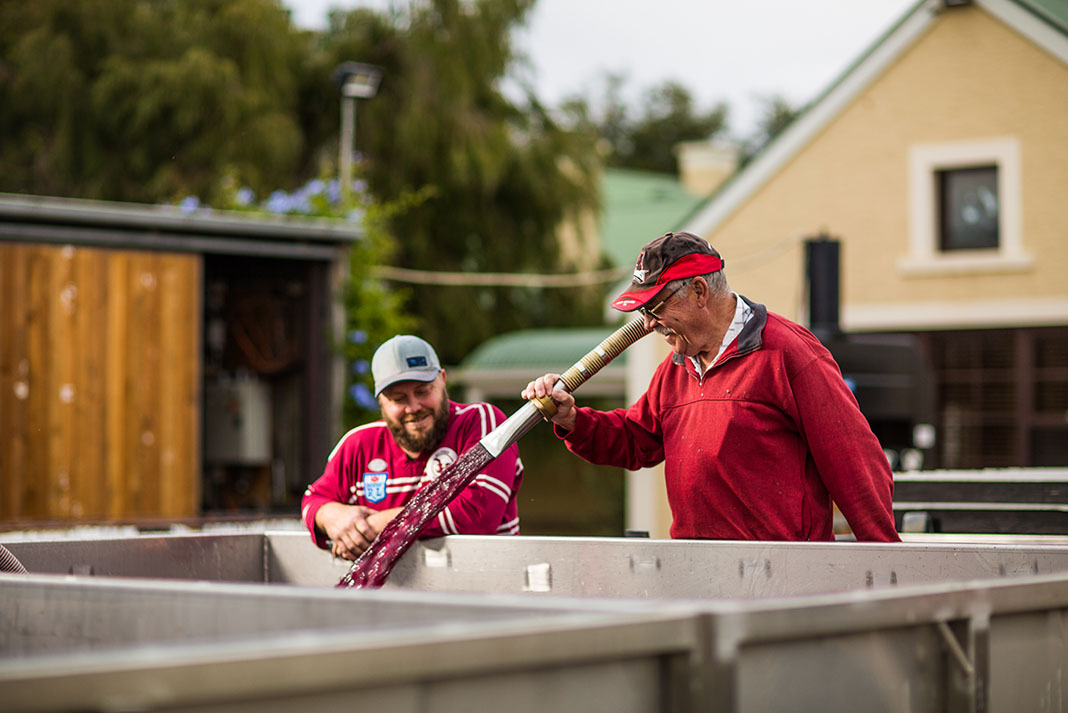 The Canutes had proven that when fruit is picked at the right time and suitable winemaking techniques are used, Vine Vale could create exceptional wines – you just needed to know the secret.

“Christian and I were like sandpaper rubbing together for a while because back when we were selling to wineries we were selling to their expectations. Then Christian came along and said no, no, you can’t pick yet, and I’m watching the grapes dry up! It took us a while. He certainly introduced us to different ideas from what I was used to, which was good.”

Christian’s travels to the Rhone Valley inspired him even further and now, 20 years on, 14 different estate grown wines grace the Cellar Door at Rusden, all featuring Amy’s artwork on the labels.

“The way we make our wines is more traditional, we don’t intervene a lot. We try not to let process get in the way of the fruit,” says Christian who, along with sister, Hayley Semmler, now run the business after their parents handed them the reins three years ago.

Looking back, all generations are proud to have put Vine Vale on the map and they are grateful, even though Chris isn’t all that keen on the name of their flagship shiraz, the “Black Guts”. It was an old nickname that stuck and is now a much loved part of the Rusden vernacular.

“All of this sort of stuff kind of seems like it happens for a reason,” says Christian.

“I think it is a result of blind faith in God, working hard and not having too much of a plan so when things don’t go right you don’t get too down.

“If you follow your passion, find something you love and work hard at it, research it and get to know it – it will take you places.”

“It’s not as though we haven’t had some very tricky times, dangerous times and hard time and Christian wasn’t the easiest young man to deal with – but we weren’t going to say anything about that,” Chris laughs.

“But when you look back over these 40 years, we definitely have been blessed. Everything has eventually fallen into place… the price of grapes were disastrously low and economically not viable and that’s what pushed us into having to get more out of our acres.”

“It became pretty clear this was no hobby farm!” laughs Dennis.